By Michael Bramadat-Willcock | News, La Ronge, Saskatchewan | May 22nd 2020
#608 of 1465 articles from the Special Report: Coronavirus in Canada 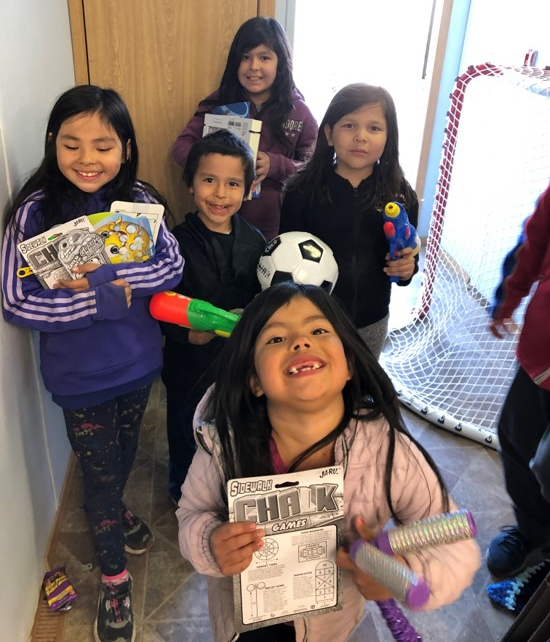 Serenity Sanderson and her friends holds up gifts like sidewalk chalk and skipping rope that they received from Men of the North through Cameco Corporations's COVID-19 relief fund. Photograph courtesy of Christopher Merasty.
Previous story
Next story

Two of the community groups on the receiving end of Cameco’s $1-million COVID-19 relief fund for northern Saskatchewan couldn’t be happier.

Recipients of the uranium giant’s program were announced earlier this month and now the relief fund money is getting to work helping six charitable organizations in the tri-community of La Ronge, Lac La Ronge and Air Ronge.

“There are so many communities and charitable groups hit hard by this pandemic, yet their services are needed now more than ever,” Cameco president and CEO Tim Gitzel said in a written statement.

Kikinahk Friendship Centre and Men of the North and are using the funds to provide food, personal protective equipment, homeless shelter services and recreational supplies for residents.

The Men of the North group in Lac La Ronge received $5,000 for recreational activities and equipment for children and families during the pandemic.

“We organized hampers and delivered them to all five schools, the women’s shelter and Bigstone Community Centre. The kids are super pumped about it,” Christopher Merasty, founder of the men’s group, said.

“We went out to the Lake Country Co-op grocery store and Giant Tiger and picked up just over $5,000 worth of (supplies) for the youth in our community,” Merasty said.

La Ronge Mayor Ron Woytowich, who is also executive director at the Kikinahk Friendship Centre in La Ronge, told National Observer the Cameco relief money was a godsend for the group’s work in the community.

Kikinahk Friendship Centre supports a 60-child Headstart/pre-kindergarten program, a prenatal program for women in La Ronge, a homeless shelter, and a youth program (with 700 kids registered), plus other community activities.

“They can hang out in their backyards all day now if they want. We want to promote a healthy atmosphere for healthy family time in the community,” Christopher Merasty, founder of Men of the North.

“The one thing about Kikinahk is that everything we do is for the good of the community. Ultimately, we’re providing 130 hampers,” Woytowich said.

“The health region is part of it, to make sure that the food is proper. We’re careful with these things,” he said.

The $1-million relief fund was announced shortly after Cameco, the world’s largest producer of uranium, suspended its operations in northern Saskatchewan due to the pandemic.

The mining company put up the money as a way of giving back to the region where it operates.

“We look at the relief fund as simply a response to this unprecedented pandemic that is impacting all of us,” Jonathan Huntington, Cameco’s vice-president of sustainability and stakeholder relations, told National Observer the day after the program was announced in April.

​​​“We can see the hurt, the struggles that are apparent through all of Saskatchewan … and while we can only imagine what the most vulnerable and underprivileged are going through, we do know that we want to help,” Huntington said.

Men of the North is a support and empowerment group for northern men based in Lac La Ronge and part of its mandate is helping build a healthy community.

Since COVID-19 hit, the group has focused on helping the community weather the pandemic.

“As of right now ... we have shifted our focus from helping the men in our community to the men helping our community,” Merasty said.

The group initiated programs such as pickup and delivery of groceries, care packages, cleaning supplies and prescriptions for residents who are self isolating. The money from Cameco has helped it expand on those efforts.

Thanks to the fund, Men of the North was able to supply recreational supplies to youth in La Ronge, Air Ronge, and on the Lac la Ronge Indian Band.

Merasty was joined by other leaders in the community distributing toys, games and recreational equipment. The group also worked with five local schools, the Piwapan Women’s Centre and the Big Stone Community Centre.

The money went further than community organizers had expected. Merasty said that well over 200 kids and families in the community benefited.

He said the recreational activities initiative gives families with children more to do during social isolation.

“They can hang out in their backyards all day now if they want. We want to promote a healthy atmosphere for healthy family time in the community,” Merasty said.

Items given away included board games, backyard gear like lawn darts, skipping ropes, and sports equipment, as well as activity books, painting kits and puzzles.

Kikinahk pitched in some of its own funds to complement the Cameco initiative.

“That’s the reason for Kikinahk, we’re a help organization. We have a multitude of programs and it was very nice to be able to provide this and work on all of these programs with health,” Woytowich said.

“The truth is, if it wasn’t for Cameco … it wouldn’t have happened.”

Food security and the availability of personal protective equipment for residents, especially front-line workers at places like the homeless shelter, have been an issue in La Ronge since the pandemic started.

“We haven't had our Headstart program running for two months now, almost. So we have a food budget there to provide to our families in the Headstart,” Woytowich said.

On pre-pandemic Tuesday nights, Kikinahk would offer prenatal classes and provide food for pregnant women in the community.

“We can’t do that now, but we can still disperse proper dietary food for them, and that’s why we have the dietician from the hospital here because she oversees a whole pile of prenatal programs,” Woytowich said.

Woytowich said that Cameco, a major employer in northern Saskatchewan, has been key in keeping programs and services going in La Ronge since long before the pandemic.

“Cameco has been very good to La Ronge. I remember when we wanted a hospital and they stepped up with a couple hundred thousand dollars, which made it easier,” Woytowich said.

And when Cameco steps up to help, other organizations tend to follow suit, he said, pointing to the homeless shelter as a perfect example. The facility has been operating on a shoestring budget as COVID-19 takes a toll on its clients and staff.

“When I got the letter from Cameco that said they would provide everything but the labour, I then contacted another organization, which funds friendship centres, and (they said), ‘If that’s what’s keeping you from getting this, we’ll fund the labour.’ We wouldn’t have gotten either if it wasn’t for Cameco,” Woytowich said.

“My message to Cameco is: You have no idea how much you helped. So it's really nice,” he said.

Woytowich worries that if the pandemic continues for a long stretch, the friendship centre won’t be able to continue its programs because it will run out of funds. He said it's not cheap: The combined cost of Kikinahk’s relief initiative is over $20,000.

“If this virus is over and we can all get back to normal reasonably soon, then it’s good. But my real concern is if this isn’t temporary, and it keeps on going through September and November, Cameco isn’t going to have that kind of money to do it again. That kind of scares me,” Woytowich said.

When he’s not out and about in the community, Merasty is an employee on the production team at Cameco’s Cigar Lake Mine. That’s now on hold since the mine was placed in care and maintenance after pausing production of uranium because of the pandemic.

“I just want to thank Cameco. That was super awesome … the generosity that they showed us and the support that they have shown our community,” Merasty said.

And the community is stronger when people look out for each other, he said.

“We’re in this pandemic together. Shutting the country down overnight takes a lot and there’s a lot of confusion and misleading information out there. We can get through anything as long as we stick together ... be responsible and practice social distancing.”

To me this fairy tale story

To me this fairy tale story is part of the problem. It lacks important background information like how many people of La Ronge work at the Cameco mine. Also, over the last 10 yrs, how much was given to the community and what was the net profit of Cameco and how much was distributed to their shareholders. Is La Ronge the equivalent of a man's work camp for Cameco? It seems Cameco has discovered the community and I am uncomfortable seeing federal relief money being used, at last, for a remote northern community as an act of largesse. I am surprised to see such a lack of context in an article of the National Observer.