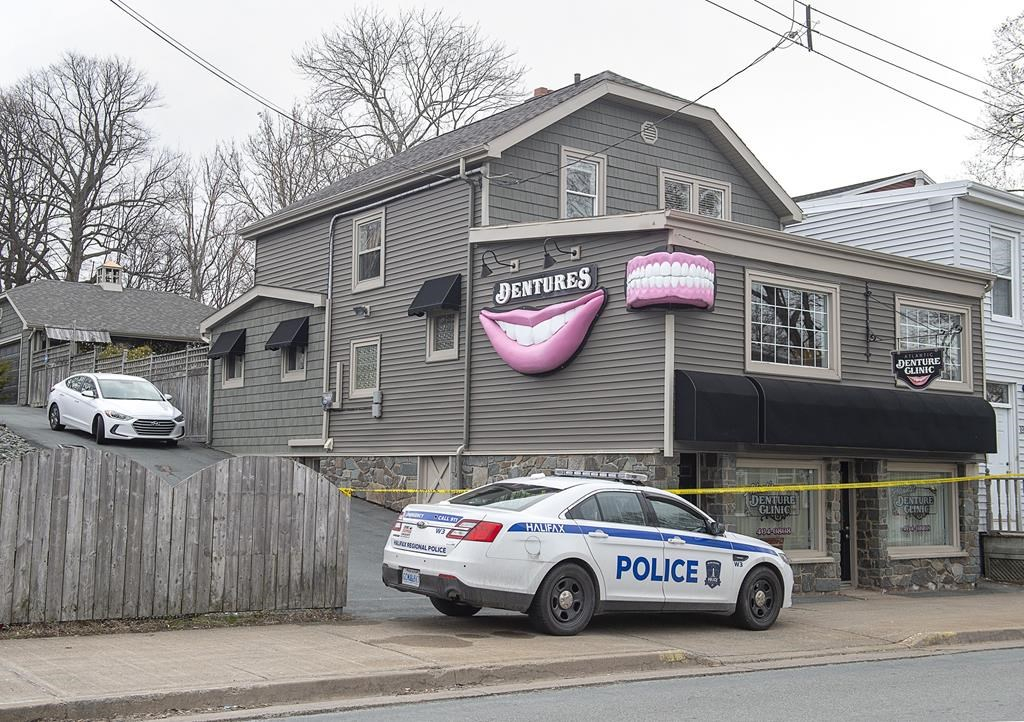 The Atlantic Denture Clinic is guarded by police in Dartmouth, N.S. on Monday, April 20, 2020. File photo by The Canadian Press/Andrew Vaughan
Previous story
Next story

The repeated threats and isolation a Nova Scotia mass shooter allegedly used against his spouse show why such cruelty should be a criminal offence in Canada, experts on domestic violence say.

Acquaintances and former neighbours have described the 51-year-old killer as a clever and manipulative millionaire who would threaten harm to his spouse's family, control her money or cut off her means of escape by removing the tires from her car or blocking the driveway.

Carmen Gill, a professor at the University of New Brunswick, says if there's a public inquiry into the shooting, she expects it will demonstrate how a law similar to the United Kingdom's 2015 "coercive control" offence may help prevent other abusers from escaping detection.

"Coercive control is a horrible form of violence because it's a way of controlling people and depriving them of their basic rights," the sociologist said in a telephone interview.

Wortman's killings were preceded by a domestic assault against his spouse on the night of April 18 at one of his properties in Portapique, N.S. After the woman escaped, the 51-year-old denturist killed 22 victims before police shot and killed him at a service station on April 19.

The woman has spoken to the police about her partner's use of a replica police vehicle and his guns, but requests by The Canadian Press to speak to her directly have been declined by a family member.

However, neighbours and multiple police witnesses have said there were many forms of intimate partner abuse before the night of the rampage.

In court documents released last week, acquaintances told police they'd witnessed "abusive," "controlling" and "manipulative" behaviour by Wortman in the past, though details are blacked out.

In an April 20 interview with The Canadian Press, Portapique neighbour John Hudson, who knew Wortman for 18 years, described one of the gunman's methods of isolating her.

How N.S. mass shooting could bring law that makes abusers' tactics a crime

He witnessed Wortman locking his partner out of their home to prevent her from gathering her belongings after an argument and then removing the tires from her vehicle and throwing them in a ditch.

Gill said this is the kind of isolation and intimidation that would likely lead to prosecution under Section 76 of the Serious Crime Act passed in the United Kingdom.

"Someone who is controlling their spouses will take all kinds of tactics to minimize their ability to reach out," she said. "This was a disturbing situation which clearly shows he was isolating his partner."

Another former neighbour, Brenda Forbes, has told The Canadian Press that in the early 2000s, the spouse came to her front door saying Wortman had harmed her, but she was afraid to report the abuse to authorities because he said he would hurt her family.

"She was afraid. He had blocked her car so she couldn't get out," she recalled.

Forbes said her neighbour had little financial security, as Wortman had encouraged her to leave her prior job and sell her car, while he provided a vehicle and employment.

Gill said a U.K.-style coercion law would allow acquaintances and colleagues to report exactly these patterns of threats and control.

It would shift police focus from trying to pin down specific incidents of physical assault, allowing them to instead look for repeated actions abusers take to control their spouses over time, she added.

The sociologist recently submitted a paper to the federal Justice Department's ombudsman for victims of crime on this potential legal reform.

It notes Criminal Code provisions prohibit specific abuse, such as criminal harassment, uttering threats, making indecent and harassing phone calls, trespassing at night, and mischief but says there is no offence that fully captures the ongoing, coercive control of intimate partners.

Provincial laws in Nova Scotia and other provinces allow for protection orders giving victims the right to stay in their home and use the family vehicle, and they may also restrain the abuser from having any direct contact with the victim, children or other family members.

"This is an important support to victims, but it is not fully addressing the problem," Gill wrote.

The British law, first enacted in England and Wales, says coercion applies if the partner's behaviour is repetitive and has "a serious effect" on the spouse and they know or ought to have known it will.

A guideline by prosecution services outlines a number of examples of coercion, including isolating a person, monitoring their phones, depriving them of access to support services, threatening family members, and controlling their finances — all activities that Wortman was reported to have carried out.

By the end of 2018, over 308 people had been convicted and sentenced under the law in the United Kingdom, 97 per cent of them male.

Heidi Illingworth, the federal ombudsman for victims of crime, said she'd been thinking of recommending similar coercive control legislation prior to the killings in Nova Scotia. She said the case, along with Gill's research paper, is giving her further reason to make such a recommendation.

"I'm definitely in favour of bringing a piece of legislation forward that would amend our Criminal Code in Canada, because we can only really deal with physical (intimate partner) violence," she said during a telephone interview.

Statistics Canada compiles police reports of violent crime that indicated in 2018 about one-third of reports of violence — more than 99,000 cases — were intimate partner violence, with about 80 per cent of this violence committed against women.

A good article related to the

A good article related to the Nova Scotia mass shooting and how the Criminal code in Canada falls short when it comes to protecting partner abuse in Canada. The reference to UK law "coercive control" law is needed in this country. The current use of restraining orders really does nothing to stop the abuser, it's a toothless order. It is time for the Criminal code to be amended to provide the Police to take positive action against the abusers. The only problem I see is the willingness of the federal government to take such a step. Serious abusers need to be taken out of society completely.