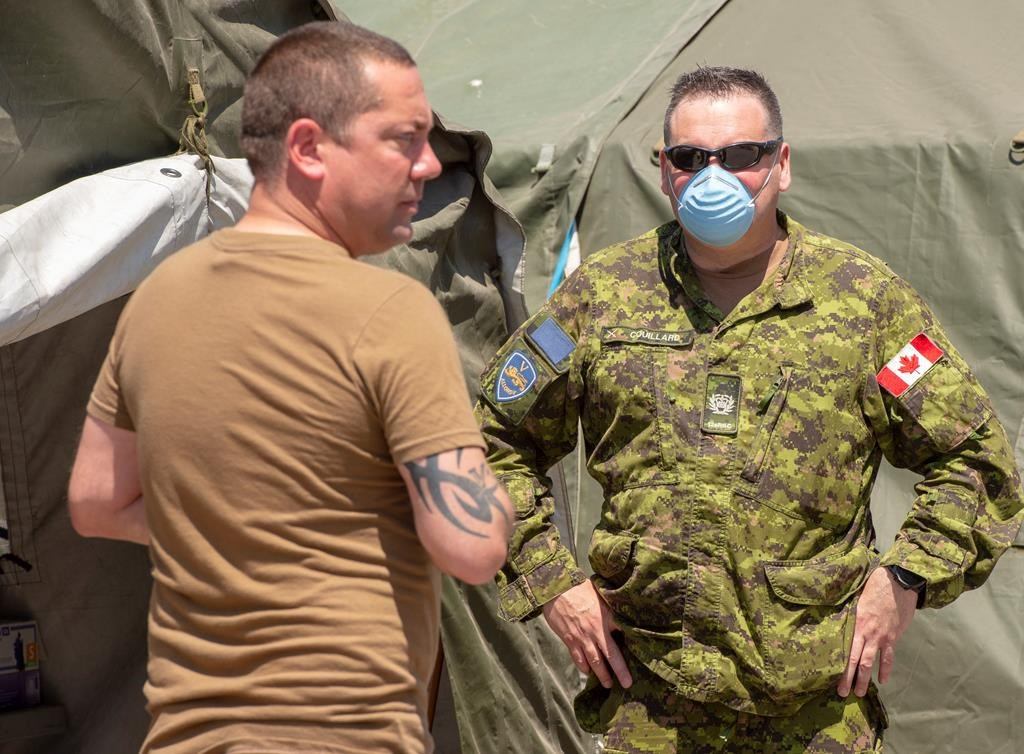 Canadian Forces personnel take their break at the Vigi Mount Royal CHSLD seniors residence on Tuesday, May 26, 2020 in Montreal. File photo by The Canadian Press/Ryan Remiorz
Previous story
Next story

Ottawa and the Canadian Armed Forces have started looking for an exit strategy amid talks with Quebec about the continued provision of military personnel to long-term care homes hit hard by COVID-19.

Quebec Premier Francois Legault asked the federal government this week to keep hundreds of Armed Forces members in about two dozen long-term care facilities until September while the province looks for civilian support workers to replace them.

The troops have been assisting in Quebec since April following an earlier request by Legault as outbreaks of COVID-19 ripped through some of the province's nursing homes. Military members were also deployed to a handful of long-term care facilities in Ontario.

Yet even as senior federal officials said discussions with Quebec had been launched Thursday, questions were being raised about the military's ability to keep hundreds of trained military medical personnel in the homes — and what impacts doing so could have over the long term.

Prime Minister Justin Trudeau underscored that deploying troops into nursing homes was never intended to be a long-term solution and that the federal government is looking at helping provinces get a handle on the crisis themselves.

"It is a stop-gap measure that is there to help out because our Armed Forces have the fundamental role of serving Canada and protecting Canadians," Trudeau said following a UN conference on the COVID-19 pandemic.

"I look forward to continuing conversations with Premier Legault on next steps, but obviously we are very much hoping Quebec is going to be able to get the situation under control. But we will be there to help them while they do."

The Canadian Armed Forces had 1,475 troops deployed to support 23 long-term care homes in Quebec on Thursday and another 285 in four facilities in Ontario. Those include a significant portion of the military's medical personnel

The Quebec facilities, home to some of the most vulnerable elderly, have recorded 64 per cent of Quebec's 4,228 COVID-19 deaths.

A report compiled by the military and released this week identified severe staff shortages as one of the main challenges for the homes as they continue to struggle with the pandemic. Legault has said he wants Quebec to hire 10,000 new support workers for the homes but needs the military's support until they've completed up to three months of training.

"(T)he government of Canada has received a request and we are working the government of Quebec to find the best solution to care for our vulnerable seniors in these long-term care facilities," said Todd Lane, a spokesman for Defence Minister Harjit Sajjan.

While retired military officers say the Forces can and will continue to work in long-term care homes if required, they noted the military does not have a glut of medical personnel — and those it does have are primarily focused on caring for other troops.

"Even in peacetime, they are fully occupied," retired commodore and surgeon general Hans Jung said.

"So when they are removed from that environment to go to an area to support non-military, then who's there to look after the military members on the base? So that is an equation that has to be carefully (managed) because you are kind of robbing Peter to pay Paul here."

The Armed Forces has been able to provide a large number of military personnel to various missions in the past, said retired vice-chief of defence staff Guy Thibault. In 2010, for example, it had personnel working on the Vancouver Olympics while also in Haiti and Afghanistan.

"We sustained all that through that period," said Thibault, who is now chair of the Conference of Defence Associations Institute.

"So the capacity is there. But the issue is there are consequences for delaying training and areas where you're really short. When everything is in the shop window, you have longer-term effects. So there will be effects that will lag."

Senior federal government officials who spoke the condition of anonymity because they were not authorized to discuss the ongoing talks say Ottawa is looking at whether the Canadian Red Cross can shoulder more of the burden and if there are ways to speed up the hiring of workers in Quebec.

The Canadian Red Cross is delivering personal protective equipment and training to new support workers and seniors' homes in the Montreal area and provided components of a field hospital, Red Cross spokeswoman Leianne Musselman said in an email.

The government and military commanders are clearly looking for a way to hand over responsibility to — and withdraw from — the care facilities, said Thibault, as they would be doing with any mission.

"For all of the deployments of the Canadian Forces that is undertaken, including this one, the question is: How does this mission end? What is the endgame?" he said.

"So whether it be September or late August or even mid-August, the question is: Are the provinces on track to be able to replace the Canadian Armed Forces?"

Ultimately, the piper has to

Ultimately, the piper has to be paid and the longer payment takes, the more extortionate it becomes. Ontario and Quebec, our most populous provicnes gambled that the onslaught of the babyboom bulge in the LTC sector could be fudged, delayed, stick handled with "stop gap" measures. Both provinces refused to acknowledge the inevitability of demographics. Humanity refuses to acknowledge the inevitability of old age and death. Capitalism sees only another opportunity to fleece people/governments of their savings and tax revenues.

We see another symptom of the ignoring of senescence in Alberta's Oil/Gas sector - its legacy of rotting poisonous abandoned wells that only adds to the ills of life cycling.

Politics is the psychopathic step-sibling of responsible governance. It's mind set can calculate no further than the next election.

This situation in LTC

This situation in LTC facilities is serious. As a 74 year old member of the long-storied Baby Boom, let me say that I am still and active and busy person with no thought of being in and LTC facility for a long time to come yet. The Baby Boom has barely reached these facilities yet. There are many, many more of us still active and abroad in the world. In the years to come (about 20 years, in fact) LTC facilities will be filled to bursting by my contemporaries . Many more facilities will have to be built, just as the school systems were built up in the 1960s. We probably will have a Covid-19 echo coming soon. More pandemics are on the horizon as well. This future we all face must be planned to be more effective that it currently exists. They can’t be building “portables” around all the existing places for the next two decades.

I wonder things. I wonder

By Emma McIntosh | News, Politics | May 28th 2020
Coronavirus in Canada