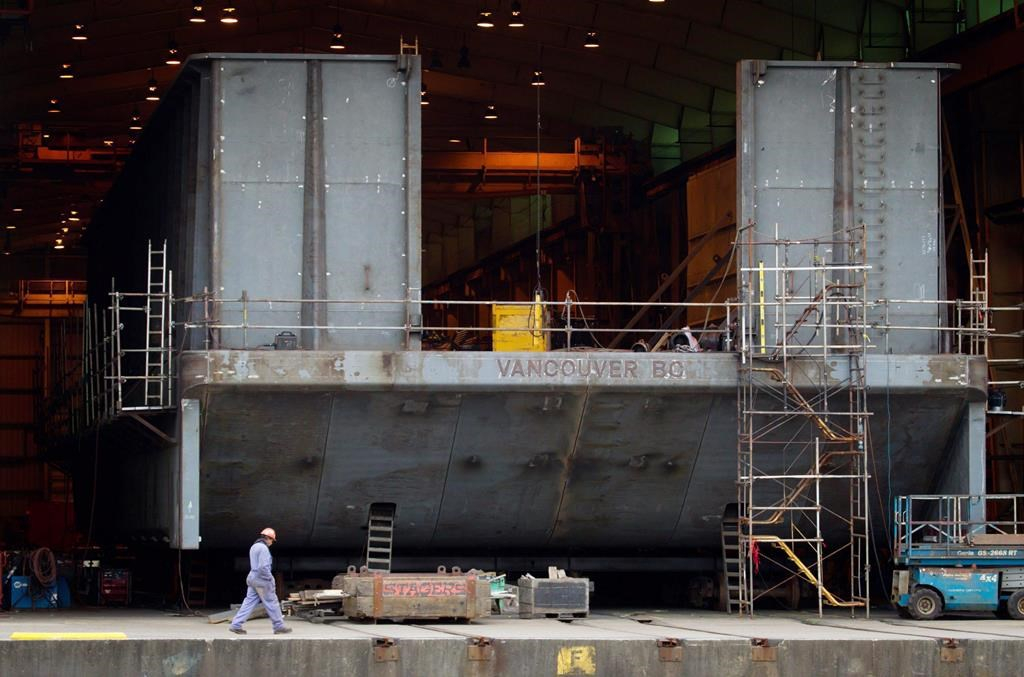 A Seaspan Vancouver Shipyards worker walks past a barge under construction in North Vancouver, B.C., on Wednesday, November 2, 2011. File photo by The Canadian Press/Darryl Dyck
Previous story
Next story

The surprise agreement between Seaspan Shipyards in Vancouver and Ontario-based Heddle Shipyards is a type of co-operation rarely seen within Canada, where shipyards often fight tooth and nail against each other for work.

The two companies, along with Quebec-based shipbuilder Chantier Davie, had each expressed interest earlier this year in competing for the contract to build the CCGS John G. Diefenbaker, which will become the coast guard's flagship once it is finished

But the pair now say they believe they can be stronger together, with Seaspan leading the charge for the polar-icebreaker contract and Heddle offering to help it build modules and other components should the Vancouver yard win.

"With today's announcement, Seaspan is partnering with a Canadian-owned and -operated shipyard to deliver economic and social benefits to Ontario and the polar icebreaker to the Canadian Coast Guard," Seaspan CEO Mark Lamarre told The Canadian Press.

"If Seaspan is awarded the polar, Heddle will fabricate modules in its three Ontario shipyards, which will create and sustain predictable long-term work for Heddle in Hamilton, St. Catharines and Thunder Bay."

The Diefenbaker was originally supposed to have been built by Seaspan along with several other coast guard ships and two naval support ships after Seaspan was selected as one of two shipyards in the federal government's national shipbuilding strategy in 2011.

Irving Shipbuilding in Halifax was the other yard and is currently building a fleet of Arctic patrol ships and the Royal Canadian Navy's next generation of warships, which will replace Canada's frigates.

But the federal Liberal government took the icebreaker away last year when it reshuffled the shipbuilding program and later asked yards across Canada to explain how and why they should get the contract.

Canada's cutthroat shipbuilding industry saw a surprise alliance on Tuesday, June 9, 2020, as two competing yards announced plans to team up to win a multibillion-dollar contract to build a new polar icebreaker for the Canadian Coast Guard.

The Diefenbaker was first announced by Stephen Harper's Conservative government in 2008. When it was awarded to Seaspan in 2011, the cost was pegged at $720 million — later increased to $1.3 billion — with delivery expected by 2017.

But scheduling conflicts, technical problems and other issues scuttled the timeline and budget before Ottawa lifted the ship from Seaspan's order book. The government has not said when it will award a contract while the cost of the ship is under review.

The heavy icebreaker it is slated to replace, the CCGS Louis S. St-Laurent, is more than 50 years old.

Quebec's Davie shipyard is expected to be the main challenger for the contract after it was the only shipyard to qualify during the reshuffle to build six smaller coast guard icebreakers in what Heddle at the time alleged was a fixed selection process.

Heddle launched a trade tribunal case against the government to that effect last year, but abandoned it after the government invoked a controversial national-security exception that prevents such investigations by the Canadian International Trade Tribunal.

Neither Lamarre nor Heddle president Shaun Padulo would directly comment on Davie as they announced their partnership.

But Seaspan is still smarting over the Diefenbaker's having been pulled from its order book and replaced with 16 smaller ships last August, with Lamarre saying the yard invested millions in equipment and infrastructure needed to build the icebreaker.

"We believe we won this work in 2011," he said. "There's disappointment that comes along with operating under one assumption and having that change. We invested in a facility that was meant to build the entire package, including the polar."

Following news of the deal between Seaspan and Heddle, Davie spokesman Frederik Boisvert touted his own shipyard's chances of winning the Diefenbaker contract after being the only company shortlisted to build six other icebreakers for the coast guard.

This report by The Canadian Press was first published June 9, 2020.

Icebreakers in an era of

Icebreakers in an era of climate change, a fleet of Arctic patrol ships, a next generation of warships -- I mean, if something actually happened in the north, a misstep on the part of some other country, a misbegotten aspiration, would we send in warships or would we instead lodge a complaint at the UN? As for Arctic patrol ships, really? Don't we have drones capable of functioning in the far north?