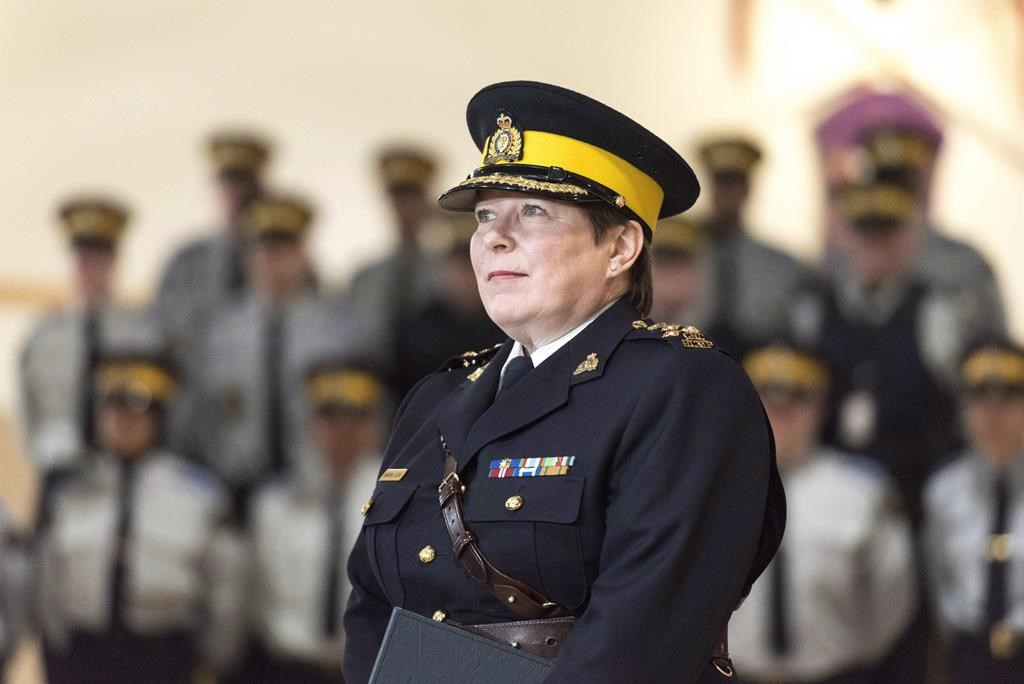 Brenda Lucki speaks during a press event at RCMP "Depot" Division in Regina on March 9, 2018. File photo by The Canadian Press/Michael Bell
Previous story
Next story

Sen. Lillian Dyck said Lucki has shown recently she does not fully understand systemic racism or have the knowledge and skills be the country's top policewoman.

The commissioner's departure would benefit all Canadians, including Mounties, said Dyck, a member of the Progressive Senate Group and of the Gordon First Nation in Saskatchewan.

In a sudden reversal Friday, Lucki spoke with regret for not having done so.

"During some recent interviews, I shared that I struggled with the definition of systemic racism, while trying to highlight the great work done by the overwhelming majority of our employees," she said in a statement.

"I did acknowledge that we, like others, have racism in our organization, but I did not say definitively that systemic racism exists in the RCMP. I should have."

Trudeau has expressed confidence in Lucki.

"There are some deep changes we need to make in our institutions, and we need to work with people who want to make those changes, who want to be part of the solution — and I know Commissioner Lucki is one of those," he said Friday.

Dyck noted that two years ago Lucki apologized at a hearing of the inquiry into missing and murdered Indigenous women "for the way we were treated by the RCMP" and promised that the force would do better.

"It is clear now that she does not possess the knowledge or leadership skills to keep her promise," Dyck said in her statement.

"Canadians and Indigenous women, in particular, deserve to have the best possible commissioner who will be able to initiate and lead the necessary changes in the RCMP to keep us safer and protect us from violence."

An RCMP spokeswoman said the force "does not comment on statements provided by individuals."

This is an interesting

This is an interesting article and has merit in relation to questioning the RCMP bosses understanding of the anti racial bias present in the force.
I had occasion to view the video of RCMP inter-action with Chief Allan Adam. The video does not provide a reason why the police are present in the first place. Viewing the video only, as to what happened, Police are there to observe, cause trouble with Chief Adam and escalated the situation by turning on the cruisers flashing lights, continued discussion with the Chief that infuriated him. The video did not support the action taken by the police. Bottom line the RCMP are responsible for the entire inter-action and arrest by the RCMP. As to the take down by the additional officer arriving on the scene, he immediately attacked Chief Adam knocking him to the ground. NO question police did little to deescalate the situation.

It is a cheap shot and cop

It is a cheap shot and cop-out for Senator Van Dyke to throw the RCMP chief under the bus. As a woman herself she also fails to understand the deadly underlying dynamics of male hegemony, and white male fear of loss of privilege.

Systemic bias is another way of describing genetic encoding that reaches back to the lizard brain era. Few, if any of our educational/political institutions seem capable of rewiring that encoding which is the main reason humanity is driving itself into lethal territory.

Fear is a fearsome emotion that suspends rationality and sends individuals back into instinctual fight or flight reaction. Those indoctrinated with the false narrative of good vs evil, of natural "superiority" and knee jerk mental pathways have come to dominate the evolutionary totem pole. Superficial analysis and blame gaming is not going to achieve any lasting change.

So, Trudeau has confidence in

So, Trudeau has confidence in this do-nothing-political-weasel. So far, Lucki's track record speaks for itself. The question becomes now that the spotlight is on, whether she can pull up her socks and produce enough effective change in a short time to quell the impatience the public has developed over the continued lack of any meaningful change in the RCMP. One of the traits of systemic problems is their inherent resistance to change, which is what helped make them systemic in the first place. The thing is, she's part of the systemic resistance to meaningful change within the RCMP; the rot extends right to the top. Asking her to fix the RCMP is a bit like asking the foxes to help improve hen house security.
While there are likely only a small minority of trouble-makers in the RCMP creating the headlines, there are around 18,500 officers in the RCMP, making that minority a sizable one for generating bad press. My prediction is that Lucki has run out of luck. She'll scramble around trying to save herself with optical-quality changes only to get mowed down with yet more bad press from additional instances of systemic racism. Then we'll hear noises of regret from the politicians, praise for past service, and a move to a new politically inspired appointment that Trudeau will have supreme confidence in....until he doesn't. Being indigenous will continue to be dangerous.

Once again, the numbers of