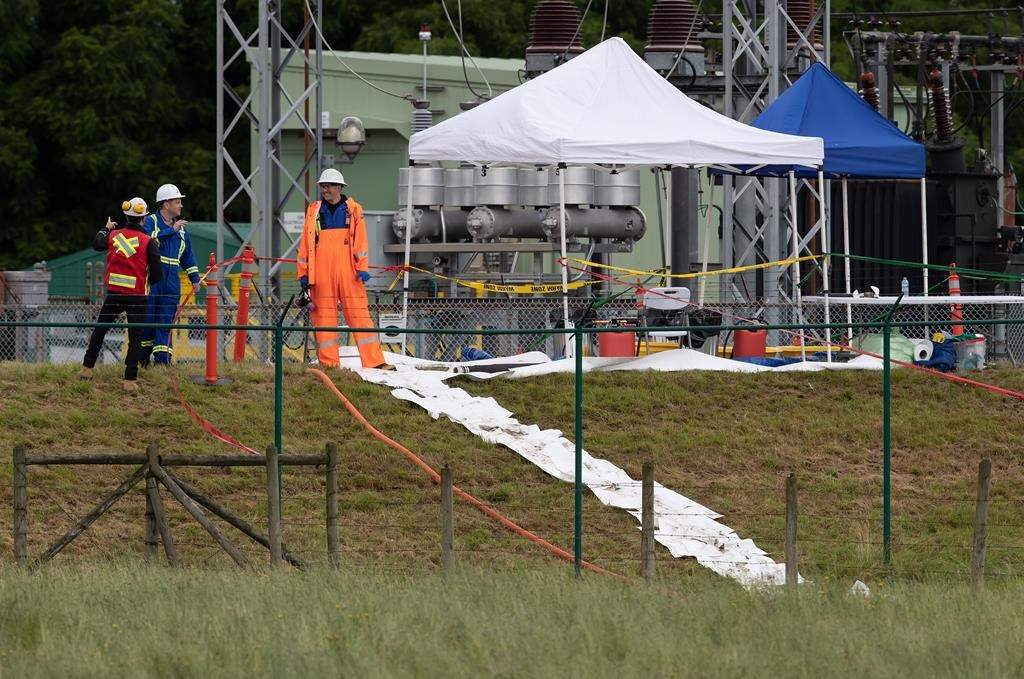 Workers are seen at the site of a crude oil spill at a Trans Mountain Pipeline pump station in Abbotsford, on Sunday, June 14, 2020. Photo by The Canadian Press/Darryl Dyck
Previous story
Next story

While an investigation is ongoing, the Crown-owned company said in a statement the cause of the spill appears to be related to a fitting on a one-inch, or 2.5-centimetre, piece of pipe.

The statement said the pipeline was expected restart Sunday after all safety protocols were completed.

It said the spill was fully contained on Trans Mountain property, the free-standing oil has been recovered and it will be disposed of at an approved facility.

He said in a statement Sunday that it's the fourth time in 15 years that there has been a spill from the pipeline on their land.

"Our main concern is for the clean-up of this spill and preventing further impacts to our territory. We need to have our monitors on the ground immediately."

Trans Mountain said the site has permanent air and groundwater monitoring in place there's no indication of a risk to the public or community.

"An Incident Command Post remains active and the company continues to work with local authorities, area Indigenous groups and regulators, including the Canada Energy Regulator, Transportation Safety Board and B.C. Ministry of Environment, in the oversight and cleanup of this incident," the company said in a statement.

A spokesman for Minister of Natural Resources Seamus O'Regan said the department is "monitoring the situation closely."

The pipeline was shut early Saturday when an alarm was received about the spill at the station in the B.C.'s Fraser Valley, not far from the U.S. border.

The pipeline moves about 300,000 barrels of crude a day between Alberta and B.C.'s waterfront terminal near Vancouver.

The federal government approved the expansion of the Trans Mountain pipeline last June that would see the crude capacity triple.

“The pipeline moves about 300

“The pipeline moves about 300,000 barrels of crude a day between Alberta and B.C.'s waterfront terminal near Vancouver.” This incorrect. Typically half or more of this amount goes to Washington State refineries via Sumas. The amount going to the waterfront terminal in Burnaby is highly variable, but recently is only about one tenth of the total. The data can be found at https://www.cer-rec.gc.ca/nrg/ntgrtd/pplnprtl/pplnprfls/crdl/trnsmntn-en....

Canadian Press should do better.

Transmountain claims that all

Transmountain claims that all the oil which remained on the ground was successfully cleaned up, how much of the 190,000 L of spilled oil was actually recovered during the clean up operations?
Transmountain also claims the monitored air and groundwater contamination levels remain safe, but how much, if at all, has the contamination level increased? (and what is the risk level, how fast is the level rising from normal operations and how much buffer is left before the levels become unsafe?)

Some things to consider when

Some things to consider when reading about releases from oil and gas facilities:
1) volumes are frequently under-reported, sometimes by an order of magnitude
2) the spill is always “confined to the lease or right-of-way”
3) water resources are “not impacted”
4) the material released was “fully recovered”
5) air and water monitoring “failed to detect substances of concern”

Under-reporting is rampant in this sector. Be cautious accepting “facts and figures” at face value.

Here we go again. Oil, gas, and mining companies have proved over and over again that they're incompetent and unable to prevent terrible long-lasting damage to the environment. The feds seem to take little notice and continue to kowtow to Trans Mountain and other corporate villains so that Alberta's unsustainable practices can continue to wreak havoc on BC and the global environment. Alberta is Texas North, and its premier is Trump Lite--irrational and irresponsible. When will we learn?