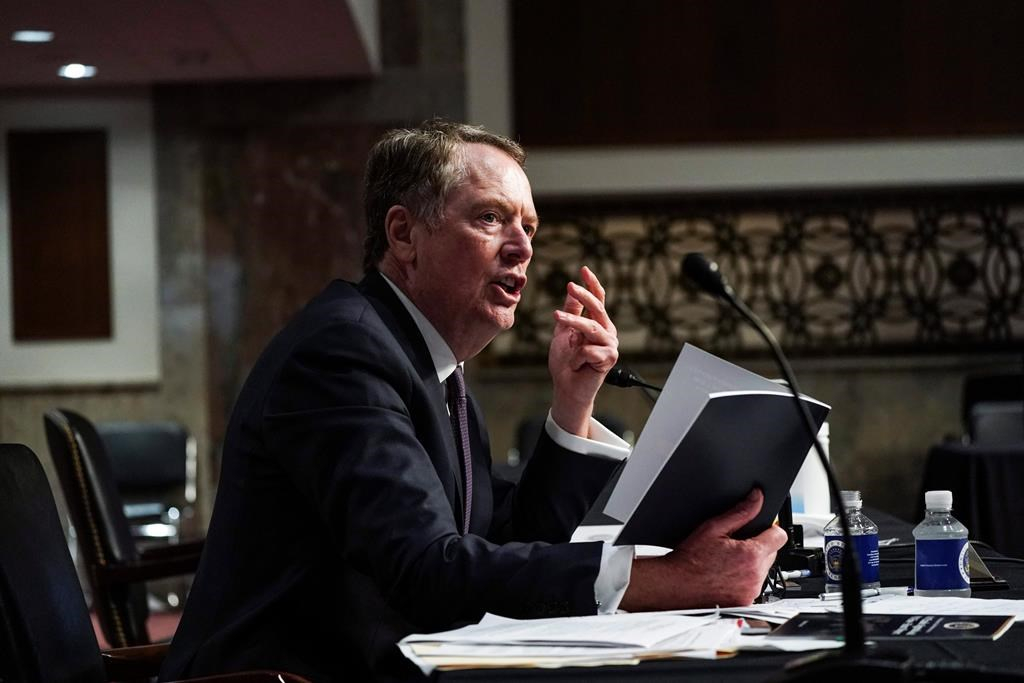 If the long-awaited debut of Canada's new trade pact with the United States and Mexico heralds a new dawn in North American relations, Robert Lighthizer sure has a funny way of showing it.

With the U.S.-Mexico-Canada Agreement coming into effect Wednesday, the U.S. trade ambassador reminded a congressional committee that within the velvet glove of trade diplomacy, Donald Trump's White House wields an iron fist of zero-tolerance enforcement.

And instead of friendly declarations of trilateral solidarity, the prospect of punitive Section 232 tariffs on Canadian steel and aluminum — an economic headache that tormented negotiators during a low point in Canada-U.S. relations — is back and looming large.

"One would think that this would have heralded a new era, but in some respects, this is a situation that just continues to roll on and persist," said consultant Eric Miller, president of the D.C.-based Rideau Potomac Strategy Group.

In his testimony earlier this month to the Senate Finance Committee, Lighthizer promised to take "the necessary steps" to ensure the agreement's small-business provisions are honoured. And he threatened legal action in the event of shenanigans by Canada's dairy sector, which is giving up 3.59 per cent of the domestic market and restricting exports on key products like skim milk powder and infant formula.

"There are a number of ways that they could implement their program that would be less helpful to us than others," he said. "If there's any shading of the benefits to American farmers, we're going to bring a case against them."

Notwithstanding the tough talk and the threat of tariffs, the long-term predictability and stability that will accompany Wednesday's new managed-trade regime vastly outweighs whatever hiccups and disagreements will occur in the early going, said Nick Guzman, an international trade lawyer with Faegre Drinker in Chicago.

"The administrations in all three countries took advantage of the USMCA rewrite to modernize the agreement and incorporate some efficiencies that are going to make trilateral trade a lot more efficient, a lot better," Guzman said.

Aside from more U.S. dairy products in Canadian grocery stores and slightly higher postage costs for cross-border shipping, the average Canadian likely won't see dramatic changes right away, he added — although modestly higher prices for cars and trucks are a possibility, given the upheaval likely from the agreement's new rules of origin and labour provisions.

"You'll certainly see some big decisions being made by automotive manufacturers on where their production facilities are located, the volumes that they're producing at those facilities and things like that. A lot of the changes to the automotive sector will be pretty significant and pretty drastic."

Canadians who get small-ticket items delivered from the U.S. via Canada Post or the U.S. Postal Service will pay more on items worth more than $20, while couriers will enjoy a new $150 exemption under USMCA — the so-called "de minimis" threshold, said Graham Robins, president and CEO of B.C.-based A & A Customs Brokers.

If the long-awaited debut of Canada's new trade pact with the United States and Mexico heralds a new dawn in North American relations, Robert Lighthizer sure has a funny way of showing it.

"If you're an e-commerce store and all your items are $80, it's a big issue," Robins said.

Lighthizer is resurrecting the spectre of tariffs because of recent "surges" in steel and aluminum exports, "substantially from Canada," contrary to the agreement that ended the year-long stalemate in May 2019.

In a letter to Lighthizer, the Aluminum Association — a consortium of 16 U.S.-based producers of finished aluminum products — broke ranks Thursday with the American smelter operators who are calling for new penalties, and urged the U.S. trade representative to reconsider.

"The integrated North American aluminum supply chain has been a crucial element of the U.S. aluminum industry’s ability to invest and grow over the past several decades," they wrote.

"Even at full capacity, U.S. primary aluminum smelters can only meet about one-third of the demand for this vital material. The aluminum industry has no choice but to import a significant amount of primary aluminum to meet demand — the only question is from where."

Experts are divided on whether tariffs are coming, given the political and economic challenges confronting the famously mercurial U.S. president.

The landscape is dramatically different than it was in 2018, when trade talks had yet to produce a deal, the U.S. economy was healthy and it would have been political suicide for Republicans on Capitol Hill to disagree openly with White House strategy, said Dan Ujczo, a trade lawyer and Canada-U.S. specialist with Dickinson Wright in Columbus, Ohio.

"The president may try to go back to his old playbook, but it's a whole new ballgame in 2020. The U.S. industry itself is divided on this issue right now. There's not a huge political win here."

That said, the May 2019 agreement did little to mitigate the risks of tariffs down the road, once the economy is recovered and the election is over, he added.

"Aluminum tariffs, much like softwood lumber, have the potential now to take on a life of their own that exists outside of the facts on the ground," he said.

But to Miller, Trump resembles a wounded animal, cornered by negative polls, a struggling economy and nearly 130,000 COVID-19 deaths amid a pandemic that appears far from under control.

"Actions that look bold, or could be construed as bold, will become more and more in favour with this administration the closer we get to the election."

This report by The Canadian Press was first published June 28, 2020.

Feds will push back against any new U.S. tariffs on aluminum, Duclos says

By The Canadian Press | Opinion, US News, Politics | June 24th 2020
Coronavirus in Canada

This article relies so

This article relies so heavily on the return of things to how they were. It would benefit from a rewrite that works with variables as the economy will likely not return as it was, especially in the US. Or to just eliminate those elements that refer to the returning (same) economy.