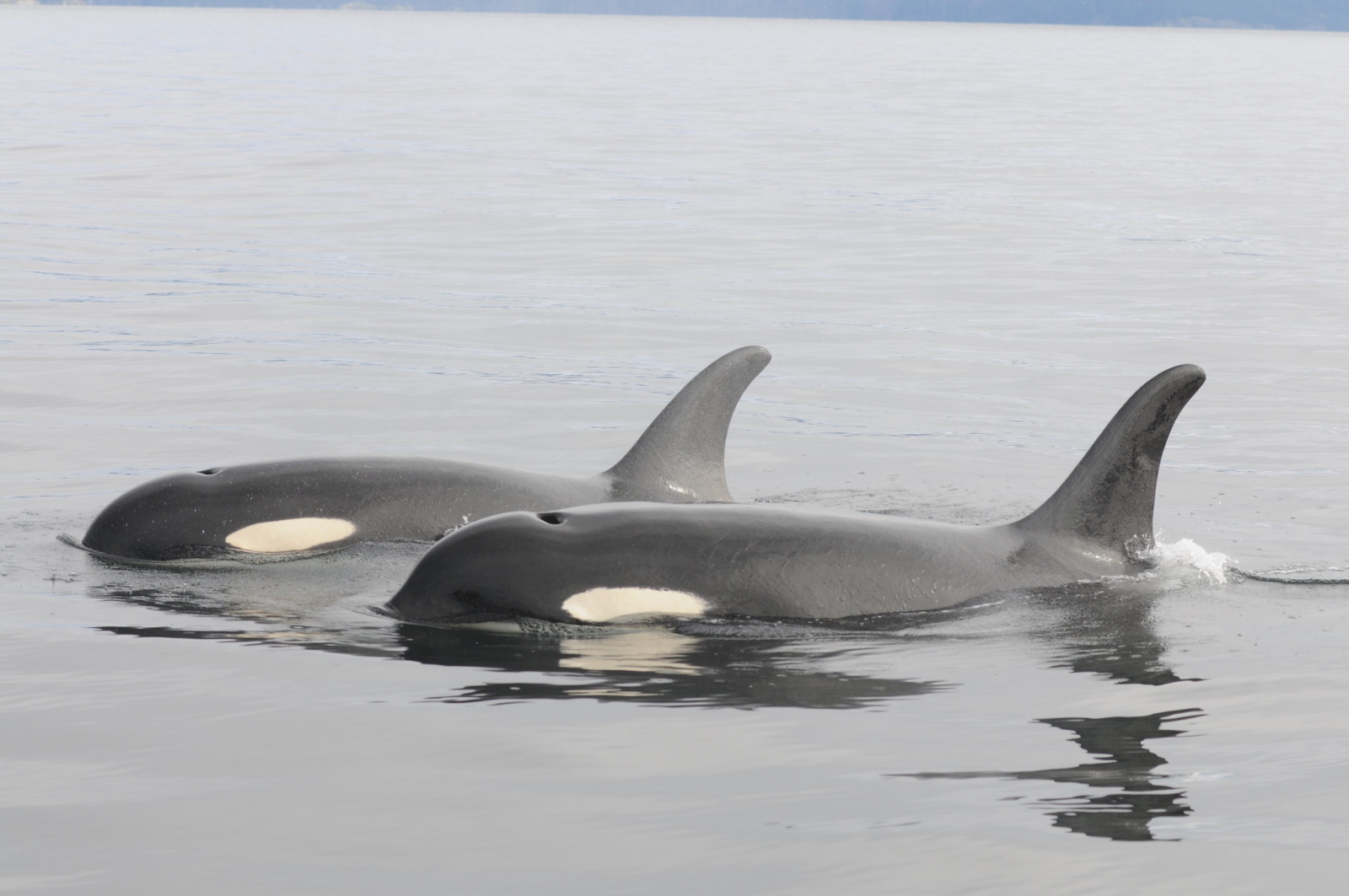 File photo of southern resident killer whales on the west coast in 2015. US NOAA Photo
Previous story
Next story

Environment Minister Jonathan Wilkinson said he will need to “personally be convinced” that the environmental impacts of a proposed Metro Vancouver shipping terminal — including on endangered southern resident killer whales — could be mitigated.

The Vancouver Fraser Port Authority says the Roberts Bank Terminal 2 project — a new three-berth terminal planned to be built next to Deltaport and the Westshore terminal — is needed to keep up with shipping container demand and to meet international trade objectives through the next two decades, and would provide economic benefits for the region.

But the project is running into fresh opposition, including from the nearby City of Delta, which recently produced a report recommending Prime Minister Justin Trudeau block the terminal’s approval. Delta’s mayor says he’s worried about the project being approved over concerns raised by scientists.

On Wednesday, Nanaimo—Ladysmith Green Party MP Paul Manly also said in a statement that he had written to Wilkinson last month expressing his concerns about the port expansion, arguing that the harms outweigh the benefits. “It doesn't take much to disturb the balance of a fragile estuarine ecosystem,” he said.

A review panel that carried out a five-year environmental assessment process concluded in March that the project would result in “significant adverse and cumulative effects on wetlands” in the area and impact numerous wildlife species including southern resident killer whales, as well as likely result in adverse effects on Indigenous communities.

There are reportedly 72 southern resident killer whales currently alive, and they are listed as endangered under the Species at Risk Act. Roberts Bank encompasses the whales’ critical habitat, according to the City of Delta report.

Wilkinson, the MP for North Vancouver, made the comments Tuesday after announcing a program meant to help protect and restore species-at-risk habitat in the Kootenay region of British Columbia.

He said he will have to make a determination in the coming months as to whether Terminal 2 has significant adverse environmental impacts. If he decides that there is, it will go to cabinet for a “conversation about whether those impacts can be mitigated to the extent that the project should proceed, or not.”

“Certainly I’ve been very clear, about all major projects, that if there are significant environmental impacts, they would have to be addressed in very substantive ways, for projects to be able to go ahead,” he said.

“In this case, one of the most significant concerns...(are) southern resident killer whales — something that I have worked both long and hard on, both in this role and in my previous role as minister of fisheries and oceans. I would need to personally be convinced that we can mitigate those impacts in a way that would not be significantly detrimental to the whales.”

In an interview after the minister’s comments, Delta Mayor George Harvie said he is not satisfied that the concerns raised by the city have been properly addressed so far, including the impact on whales, as well as whether the project would take up valuable agricultural land.

Canada's environment minister says he will need to "personally be convinced" that the "significant concerns" raised over a proposed Metro Vancouver shipping terminal’s potential impact on endangered southern resident killer whales could be mitigated.

“We’re relying on the next process, which is the minister of environment ... if he says it needs a cabinet decision, then the cabinet (should) know that the City of Delta wants to have those issues addressed before we do any means of supporting the development in Delta,” he said.

“Part of our official community plan is that decisions have to take the environment into consideration ... This is already the largest port in Canada. If it gets larger it must, must address the concerns that scientists have raised.”

The review panel found whales would be significantly adversely effected given the effects of the project and the marine shipping associated with it. It cited issues like underwater noise, the availability of Chinook salmon prey, and the potential for ships to collide with whales, as well as a lack of mantatory mitigation measures.

The panel said it was informed by several participants that the whales “may be at a tipping point, beyond which their population would not be able to recover.”

Ecojustice, for example, said increased shipping traffic would push the population into decline, while the federal Department of Fisheries and Oceans said more disturbances could lower whales' ability to forage, potentially leading to reduced survival.

The port authority said it will develop a plan to “maintain and enhance natural productivity of the Roberts Bank ecosystem,” including potentially making a “meaningful contribution to the future health and recovery of iconic west coast species” such as the southern resident killer whale.

The port authority also said it would implement a series of mitigation measures for construction activity including using marine mammal observers and “underwater noise reduction and dampening methods and technologies,” as well as putting in place buffer zones.

Mr. Wilkinson must know by

Mr. Wilkinson must know by now that our single species is on the path to ultimate suicide if he thinks that economics trumps all scientific projections re the fate of the remaining species we haven't yet extinguished. The asteroid that took care of the dinosaurs was just a faster way of clearing the decks than our species is doing. But our unwillingness to look back 66 million years and assume it can never happen again just because a different agency will be responsible for the clearance is the ultimate in stupidity similar in our willingness to chop down all the old growth trees in BC and pretend we are practicing a policy of sustainability. I wonder what life form will be exhuming our fossils in another few million years if Mr. Wilkinson overlooks that inevitability?

What about the word "mitigate

What about the word "mitigate" is it that Wilkinson seems to think means no danger?
Mr. Wilkinson: mitigate is what you do once the damage is done. There is no mitigation of dead animals. There is no amount of "mitigation" that can possibly pull back from further damage a species already facing extinction .
Time for him to grow up and stop his magical thinking.
Along with our PM and his hacks & cronies.

I suspect that Wilkinson and

I suspect that Wilkinson and other semi-scientifically-literate federal ministers are in the minority in cabinet. Recent comments on the leanings of the cabinet majority by the Minister of Natural Resources (definitely pro-oil) illuminate that fact.

Would that the federal Minister of the Environment draw the same attention to the Trans Mountain pipeline expansion project and the effects of even a moderate oil spill from a tanker in the Salish Sea would have on not just orcas, but on every ocean ecological system and the marine-based economy within 200 km of the spill site. At least the giant reset imposed by the pandemic and the latest international economic and policy action away fossil fuels (but not, as it were, in Canada save for the lowest hanging fruit of a national carbon tax) provide some hope that TMX will be slowed down, if not declared DOA.

Would that the Minister of the Environment at least try to address the contradictory shipment of thermal coal through federal ports while concurrently climbing the climate rhetoric ladder. Most of the coal arriving at the same Roberts Bank dock site for export comes from Wyoming; all the US West Coast ports rejected it, while Canada accepted it, even with very few new jobs created. This kind of hypocrisy is costing them votes. Ports Canada giving notice under a directive from the government that it will place a hard deadline on the coal export permits will (i) indicate that the feds are actually serious about real climate action after years of strategic delays, and (ii) free up that existing dock space for container ships with little (if any) net increase in the number of ships in transit in the Salish Sea, and negligible port expansion, likely moderate rebuilding of the existing docks. Is that not an acceptable compromise?

Mitigation? What a farce --

Mitigation? What a farce -- there can be no adequate "mitigation" of any of the damaging effects of more tanker traffic in the Salish Sea, or damage to the wetlands and other nearby areas, or any of the other significant ecological harms noted in the "summary of key findings" in the report. Also, what part of "climate crisis" do our governments fail to understand? Apparently they fail to understand any of it, paying lip service and then charging ahead with anything new and destructive that will make short-term profits, regardless of harm to the biosphere. The willingness of our governments, both provincial and federal, to pander to corporations at the terminal expense of life on earth, is corrupt, treasonous or simply wilfully blind and stupid. If this terminal is given the go-ahead it will just be one more spike in our collective coffin. If it doesn't, I may retain a tiny glimmer of hope.