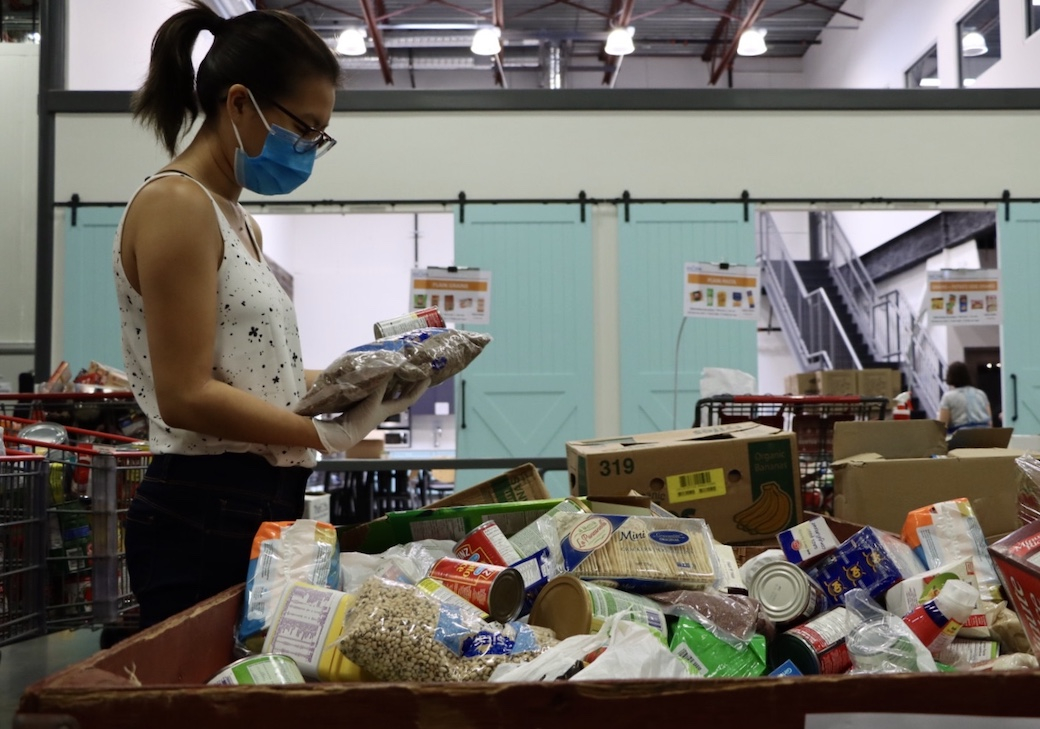 About 48,800 kilograms of food pass through the Greater Vancouver Food Bank each week. It takes about 80,000 volunteer hours each year to sort and distribute the food. Photo by Marc Fawcett-Atkinson.
Previous story
Next story

Mounds of mangoes and pallets of peanut butter sit on a monochrome concrete floor.

They’re islands of sustenance, dwarfed in the Greater Vancouver Food Bank’s cavernous warehouse — and a fraction of the roughly 40,800 kilograms of food that pass through the distribution center each week, explained the organization’s CEO, David Long.

That volume of food — and the number of people eating it — has ballooned since March. Adapting the change hasn’t always been easy.

“I don’t think I’ll ever forget March 16th, March 17th when literally everything closed down,” he said. “Overnight, we were distributing out of the back of a truck.”

The organization estimates it feeds about 28,000 people a week, providing food through a combination of grocery bag deliveries, pick-up locations, and by supplying charities that offer cooked meals to those in need.

When the pandemic hit, said Long, most of those distribution locations closed. Many of the volunteers who keep the food bank running stayed home.

“There’s 45 full-time employees (at the food bank). And then we have somewhere in the region of 80,000 volunteer hours a year,” he said.

Meanwhile, the number of people using the food bank soared.

In June, Statistics Canada reported that 14.6 per cent of Canadians lacked food at least once during the previous month, a four per cent increase compared to 2018.

That’s about 5.1 million people, or twice the population of Vancouver.

Children are particularly vulnerable: Almost a fifth of Canadian households with kids reported a lack of food in May.

It’s the kind of increase Long anticipated when the pandemic struck. Closing the food bank, he said, wasn’t an option.

“We realized pretty quickly we had to make some changes.”

Within a week, the organization had set up a new distribution system.

Fewer volunteers are allowed in the warehouse at once to allow for social distancing, and the space is sanitized every hour. Clients can’t browse — prior to the pandemic, the distribution center was modeled off a supermarket — but instead ask volunteers to fill a box with items they want.

The changes were essential said Long. Had any of the organization’s staff or volunteers became infected, especially in the early days of the pandemic, the whole team would have been quarantined.

The pandemic didn’t only affect distribution. Donations of cash and food surged — including a donation of excess food worth over $200,000 from Holland America Line — an increase that, so far, has continued he explained.

“It’s been quite overwhelming. People’s generosity, not only in the public but from businesses as well,” said Long.

The federal government has also provided $150 million to support food banks across the country and connect them with surplus Canadian food.

“We absolutely have the food — this pandemic proved it. Even with people hoarding at the start, there’s so much food out there.”

That excess isn’t unique to the pandemic.

A 2019 report by Second Harvest, an organization that redistributes excess food, noted that about 35.5 million tonnes of food produced in Canada is wasted each year. Thirty-two per cent of it was perfectly edible food — but only about 0.1 per cent of it makes it to food banks.

“Corporations should be forced to figure out what to do with their food waste,” said Paul Taylor, the executive director of FoodShare Toronto and anti-poverty activist.

“They should not be dumping it on charity. The volunteer hours that have been diverted to sort through corporate waste is appalling.”

Nor does this excess food help the majority of hungry Canadians.

Going to the food bank is an “act of desperation,” the report noted. Families using them are “likely behind on bill payments, rent, and other basic necessities…showing it takes substantial improvements to a household’s financial circumstances to shift them out of food insecurity.”

The burden doesn’t fall evenly. Black households are almost three times more likely to be food insecure than white ones, while 36.6 per cent of black children live without enough food.

The pandemic has exacerbated this discrepancy. Not only is it visible in people’s direct access to food, Taylor said, but also in the economic, social, and physical forces that determine if they can afford food — and purchase it safely.

For instance, he noted that many of the essential workers who needed to keep working at the height of lockdowns were women of colour. Many were not able to socially distance on the job or on transit, or eligible for adequate paid sick leave. That left them and their families exposed them to the virus — and food insecurity, should they lose their jobs.

“We need to be thinking about food apartheid,” he said.

“There are largely racialized neighbourhoods with little to no fresh food options, which means that folks have to get on transit, spend money, travel far distances to work. All this just to get food for their families in the midst of this crisis.”

Data from Ontario shows that the rate of COVID-19 in the province’s most racially diverse neighbourhoods is about three times higher than in its least.

People living in these areas are also more likely to experience severe outcomes: hospitalization rates and ICU admission rates were four times higher, while death rates were twice as high.

B.C. doesn’t keep similar data, but about half the infected workers in long-term care facilities are people of colour.

That’s on top of the health challenges facing people without enough food.

Researchers at the University of Toronto note that adults in food insecure households are more likely to suffered from chronic conditions like diabetes, hypertension, and anxiety disorders. Children who don’t have enough to eat are also more likely to develop chronic health conditions.

For Taylor, this points towards a need for deeper reforms. People need to have enough money to buy their own food — and that’s where government support will be most effective.

It’s a sentiment echoed by Graham Riches, a professor emeritus of social work at UBC whose research focused on hunger.

“Food insecurity is an income problem. It’s not a food problem,” he said.

And even with the CERB, Canadians who couldn’t work during the pandemic were almost three times more likely to lack food than those who had remained on the job.

That should be a warning, said Taylor.

Canada was ill-prepared and scrambled to protect Canadians.

In the next decades, the effects of climate change could be even more catastrophic, with droughts, hurricanes, forest fires, floods, heat waves, and pandemics all predicted to become more common and virulent.

“We’ve got to get our house in order. We’ve got to challenge inequities in every system so people can flourish and so that we are better prepared to tackle climate change,” he said.

Bottom line, we shouldn't need food banks at all. We could and should have a social safety net, including social housing, that ensures everyone can afford to eat. Not to mention adequate wages at the low end; lots of people visiting food banks are working.

Corporate waste, indeed. And they take a charitable donation tax write-off for the retail value.
The part that's not waste? Customers pay $10 for a mystery bag of processed "stuff", and the companies get a charitable receipt for that, too: they get the profit, the excess they charge customers for the contents, and then take the write-off.
Once again, the solution's in the tax system.