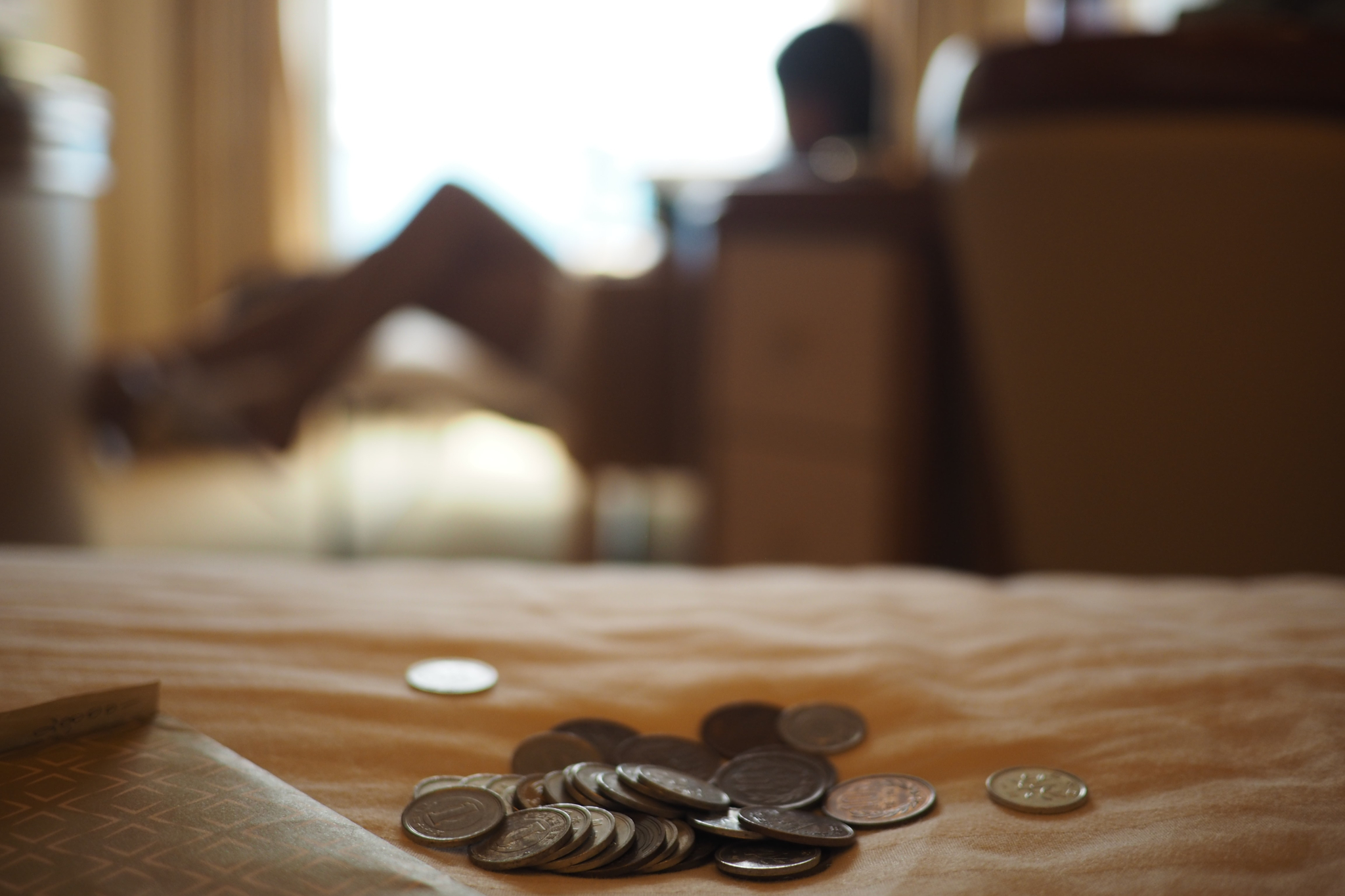 The idea of a universal basic income, a system through which everyone is guaranteed to receive a base level of money periodically, is quickly gaining traction in Canada as the federal government looks for ways to tackle the economic downturn left in the wake of mandatory pandemic shut-downs.

Implementing a universal basic income would mean that every Canadian, regardless of whether or not they have a job, would receive enough money to cover the basic cost of living. Politicians and activists alike have been urgently discussing the need for a basic income as Canada's Emergency Response Benefit (CERB) comes to an end.

CERB provided Canadians who were put out of work because of the pandemic with $2000 every four weeks. But as the financial aid is slowly being phased out, many Canadians are still struggling to find their way back into employment and worried about staying afloat.

Prime Minister Justin Trudeau’s government has been pressured to make universal basic income policy a top priority as the throne speech, where he is expected to lay out a federal agenda, quickly approaches.

While the idea of a guaranteed income has been touted as unfeasible by some economic critics, Sheila Regehr, chair at Basic Income Canada Network, a non-profit that advocates for universal basic income, says that financial programs put in place during the pandemic prove that the government is capable of making it happen.

“They found ways of getting money to people fast, on the ground, at a point when they really needed it,” said Regehr, attesting to programs such as CERB.

When CERB was first launched in April, Statistics Canada reported that nearly 6.7 million Canadians had applied. That number has slowly declined as businesses have been reopening. But many Canadians still remain out of work as the federal government looks toward transitioning people out of the program and into employment insurance, which Trudeau’s government is in the process of revamping.

While CERB isn’t comparable to a basic guaranteed income program, because it isn’t universal, Regehr said the program has laid down groundwork for running a universal basic income policy.

CERB showed that the government was capable of running a financial aid program at the federal level, and was able to adapt quickly, adjusting the program or enacting new ones to address groups such as pregnant people and students, who weren’t initially eligible for CERB.

“The learning was great,” Regehr said. “The learning from that, I think is something that we really need to use to take forward.”

Is it time to seriously consider a Universal Basic Income program in Canada? #cdnpoli

And moving forward, Regehr said, means implementing a program that includes everyone. When it comes to the question of whether a program like that is even feasible, especially given Canada’s current economic downturn, Regehr says the answer lies in existing programs such as the Canada Child Benefit, a program that was enhanced by Trudeau’s government in 2016.

The study Regehr is referring to was published by the Canadian Centre for Economic Analysis in September 2019. It surveyed the economic impacts of the program and found that CCB gave families more purchasing power and generated economic activity that was “almost twice the size of the CCB payments themselves” while also alleviating issues of child poverty and food insecurity.

The concept has also been put in motion through a pilot project in Ontario. The Ontario Basic Income Pilot project was launched in April 2018, with a select number of participants in certain regions of the province.

It was shut down in March 2019, when Doug Ford took over the premiership of Ontario.

“A research project that helps less than four thousand people is not the answer and provides no hope to the nearly two million Ontarians who are trapped in the cycle of poverty,” said Lisa MacLeod, Ontario’s former minister of children, community and social services in a statement announcing the program’s closure.

Researchers from Ryerson University and McMaster University who studied the effects of the program found that participants had seen improvements to their health and job prospects.

“In this sense, the pilot was nothing short of successful,” concluded the study.

“It’s an alternative to allowing your population to deteriorate,” she said. “People are the economy, you need to be able to allow them to be in the economy.”

However, Regehr suggests that the Canadian government look into existing systems and build a basic income program on top of processes that have already been proven to work.

Regehr proposes a kind of program where the level of financial aid is scaled down depending on how much income the person brings in.

“Universal is like the way we consider universal health care,” she said. “You get the care when you need it.”

What Canada will have to figure out specifically is at what level of government the program should be implemented. Again, Regehr pointed to existing systems, such as provincial-federal shared agreements put in place for child benefit programs, where funds are provided by the provinces but administered at the federal level through the Canada Revenue Agency.

Supporting a basic guaranteed income program would also require some level of tax reform, she added.

“With that better tax fairness, then you can deliver a basic income that actually makes society better for everybody.”

Researchers from the University of British Columbia have also looked into the merits of a universal basic income, and found that the federal government would have to figure out complex details before they could move forward with a program. They include considering whether payments will be made out to individuals or families, when they would be given out, how they would be taxed and how the existing tax system would have to adapt to finance the program.

“Taking a basic income seriously as an option means having an evidence-based discourse about how one would both design and implement it,” concluded the study. “Simple claims about the simplicity of a basic income on one side and simplistic characterizations of what proponents of a basic income are setting out on the other side do not move us toward the goal of building on what has been both revealed and achieved in this crisis to create a more just society.”

Trudeau delivers his throne speech on Sept. 23; whether he will move toward a universal basic income program remains to be seen, but activists and politicians alike are urging the government to make it happen.

I am unsure if this move will

I am unsure if this move will only entrench an acceptable poverty level income, in the absence of a federally mandated minimum wage requirement for all vendors who get government contracts, a major CMHC commitment to fund affordable housing, denticare funding (to the provinces) and other measures that make any basic income dollars real dollars.

I agree completely ... and

I agree completely ... and would caution that the version of Basic Income that was contemplated by some proponents was on welfare rates level and it contemplated removal of all other "state payments." No more OAS, GIS, welfare, disability benefits, etc., and it became quite clear the thrust of their purpose was to subsidize a less-than-livable minimum wage.
No reason, either, why some transfers from federal to provincial governments couldn't be conditional upon livable minimum wages, and provinces to mandate the same requirements re government contracts, at the provincial and municipal levels. It has to be across the board, or it will be subvertible and subverted, because that's the nature of the beast.
The other thing is, what constitutes a livable income varies from region to region, or from one municipality to another.
As with everything good in general principle, the devil's in the details.
So to push away the possibility of "universal basic income" turning into minimal basic income, I'd urge people to refer to it in conversation at least as a universal *livable* income.
Heaven knows there are plenty of people trying to maintain a roof on considerable less than half of what CERB paid out.

That said, there needs to be a guarantee of *livable* income ... whether that's accomplished by way of a universal basic income, or that plus better health coverage (most provinces have some level of pharmacare for low income people, but there isn't access to even basic dental care for many people)

It is so exciting to hear

It is so exciting to hear there's pressure within the government to seriously work on UBI policy. The evidence in places like Alaska, or the Cherokee in North Carolina is so positive. Experiments in UBI are popping up all over the world (India, Kenya, Ontario, Finland) because it aligns with modern understanding of human psychology - that people are more creative and productive when their basic needs are met and they have some hope in their future. I know so many low-income, single moms who's families would be transformed by this, and single moms on disability who could enjoy volunteering somewhere or take part-time work of some kind if it wouldn't jeopardize their already-too-little income. It will be difficult to overcome the urge, as a country, to want to control what people do with redistributed wealth but hopefully the evidence from the examples we have will speak louder than our fears.

Not all people with

Not all people with disabilities are able to volunteer ... lone parents in particular have plenty to do without having to add volunteering.
We don't seem to have difficulty redistributing wealth without conditionality to people who already have plenty of it. Consider all the non-refundable tax benefits (many of which used to be refundable).

Perhaps a universal basic income would help to correct the income and wealth distribution by discouraging workers taking jobs at too low compensation. But it's practicality is very much in question. I don't think we have government with sufficient willpower to stop other public funding programs that should be displaced when a basic income is introduced, nor to keep the guaranteed income low enough to not be a disincentive to find other income.

With the CERB example it's possible to estimate cost and funding for a universal income program. Obvious questions are: how much did CERB cost? How was/will it be paid for?

See what I mean? Where do

See what I mean? Where do people get the idea that people are too lazy to work without being "incentivized" -- I put it in quotes.
How "practical" is it to be paying a basic income to bank presidents?
Somehow, no matter what the forum, someone brings up the "lazy welfare recipient" trope, people who are well-meaning and might not recognize what they've said as being in those terms.
But again: we have no problem at all paying OAS to seniors who have other income in excess of the average household income. There are no minimum wages in Canada that are as high as that.
In fact, claw-backs of all the refundable tax benefits have low threshholds, and low ceilings.
At some point, the question of need has to be addressed as applied to all people, not just those who can work, not just those who are working age (people with disabilities and old folks have received short shrift from the perspective of helping them deal with the extra costs engendered by lockdown. Lord knows most of them were beyond struggling already.
Who else is expected to trek halfway across town to get groceries (aka get usually second-rate food from the foodbank). Fresh produce for everyone else: sardines, peanut butter, canned soup and kraft dinner for the rest. (Too bad about those food allergies!)