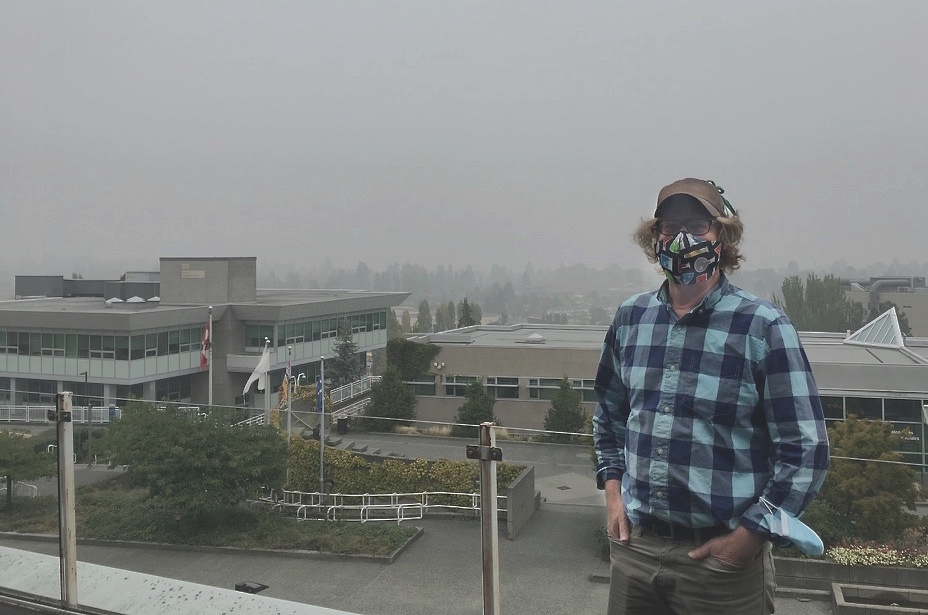 The acrid blanket of smoke from wildfires raging in the U.S that is cloaking southwest British Columbia and Vancouver Island is expected to continue for the next couple of days.

Very high air quality health risk advisories established over the weekend are still impacting the lower half of the province.

Though immediate air quality health risks will abate shortly, the cloying wall of smoke is a stark indicator of what’s in store as climate change continues to amplify the risk and ferocity wildfires, said air quality researcher Erik Krogh.

“You only have to look out the window right now to see the effects of climate change,” said Krogh, a co-director of the applied environmental research laboratory (AERL) at Vancouver Island University.

“These images are vivid, dramatic and scary, and have a big impact on human health.”

Smoke gets in your eyes

Krogh, who monitors atmospheric data in the Vancouver Island region, said the air quality currently was “severely impacted” across the southern swath of the province.

“It doesn't really matter where you are at the moment, whether you’re in Campbell River, Nanaimo or Abbotsford,” he said.

The B.C. government’s air quality health Index (AQHI) map indicated most communities in the south of the province were at the highest range of risk due to the smoke, as of Monday.

“You only have to look out the window right now to see the effects of climate change,” Erik Krogh, Vancouver Island University air quality researcher, as smoke from U.S. wildfires smothers southern B.C. @VIUniversity #wildfires #climatechange

The public, especially the elderly, children and pregnant people, is advised to avoid any strenuous outdoor activity until the air quality improves.

Environment Canada also warned that individuals with heart or breathing problems are at greater risk and should follow medical advice about exercising and managing any health conditions.

The smoke should dissipate Tuesday through Thursday in B.C., according to Chris Rodell, a weather forecast researcher with the Earth, Ocean and Atmospheric Science department at the University of British Columbia.

A trough of low pressure and southerly winds drove the wildfire smoke into B.C., Rodell said.

“But winds are shifting to the typical westerlies we see in this part of the world, and the smoke will be transported east,” Rodell said, adding the smoke will likely move into Alberta.

On Tuesday, Canada Post announced it was suspending mail delivery due to poor air quality in several areas of B.C., including Metro Vancouver, much of Vancouver Island and in the Oakanagan Valley and Similkameen regions.

The wildfires in the western U.S., and the environmental and health impacts currently being experienced in B.C., pose no real surprise to scientists, Krogh said.

Scientists have long been measuring and expecting impacts from global warming, he said. But, given the gradual changes over extended periods of time, it is often hard for the public to envision or grasp how climate change will impact them, Krogh said.

However, this year, a number of events have demonstrated the impacts of climate change clearly and concretely to the public, he said.

Wildfires ravaging California, Oregon and Washington states provide a vivid image of the negative impacts of global warming, he said.

While conversely, the COVID-19 pandemic illustrated a positive effect tied to drops in global emissions, he said.

“People all of a sudden got a clear view or vision of the human environmental footprint, particularly on the atmosphere and air quality,” he said. “The connection between us, what we do, and the environmental impacts became undeniable.”

“And this fire event has also shone a light on the more difficult, or more nebulous, connection between human activities and climate change.”

Although contrary in effect, both the U.S. wildfires and the emissions drop tied to the COVID-19 crisis underscore fact that climate change impacts and solutions transcend borders, Krogh said.

“It's not unique, local political problems that we have to solve here,” he said. “It’s a global problem which requires global solutions.”

A long held scientific consensus is becoming visible. Let's hope the 'seeing is believing' crowd get it, but whether they do or not, change is coming from several directions at once. The good news is, that just as climate disasters manifest on many vectors, resistance to a rising green house gas future comes in many forms.
We can all do something; many of us can do several things. Everything, from refusing to fly, taking public transit, putting panels on suitable roofs, looking into EV bikes and vehicles, growing a backyard garden, learning to can and dry food, buying less and buying local...............all reduce our carbon footprint, and open doors of satisfaction and purpose lacking in much of consumer culture.

Already, families are reporting being less in debt under covid conditions; we can continue that restraint in spending and get back into the black financially. Disruptive business models and technologies will increase in scope and scale, if we support them....and who knows, we might even discover its more satisfying to live in community than vacate on, from islands of urban isolation.

Or we can just refuse to change and hum 'burn baby burn' to our wee ones.

This year nearly tops 2017 for terrible Beijing-like air quality in Vancouver, with 2018 following up. Another very bad year was 2003, with the infamous Okanagan Mountain Park fire in BC that destroyed over 200 homes in the suburbs of Kelowna, BC. What makes this year different is that the worst fires are occurring south of the border with the smoke drifting north, and ending up far, far away over both the Pacific and Atlantic oceans in the next few days, according to the linked Fire Smoke animation.

Horrendous! Simply horrendous for us Westcoasters, especially for those with medical conditions like asthma.

In future we can expect 40-degree days and weeks in summer, which places the Metro Vancouver North Shore forests at risk. Those forests cover the mountainsides in the watersheds that protect the high-quality regional water supply. The thickest smoke we have seen in Vancouver was in the summer of 2017 when big local fires burned in Pemberton and Squamish. It's hard to imagine the North Shore mountains that loom above the city to be ablaze.

There are those who believe that breaking capitalism and consumerism this afternoon will result in a cooler world tomorrow morning. That is delusional, according to the scientific evidence. There is enough global warming already in the pipe from all existing GHGs in the atmosphere to continue the warming for at least another century even if all new CO2 emissions stopped overnight, according James Hansen, one of the world’s pre-eminent climate scientists, in his seminal book, ‘Storms of My Grandchildren’. We must both adapt to ever hotter conditions AND reduce our emissions. Starting a war on capitalism will never create the necessary science and multiple policy front conditions required to do the job, let alone prevent a lot of people who have the means to help from being turned off by the effort. Of all entities, cities are in the best position to fight and defeat climate change, followed by agricultural districts. Electrification of our domestic economy and the fixation of carbon into the vast strata of soils (and forest biomass) are key.

It will take hundreds of billions of dollars over the years in tax-based expenditures and private capital to redesign our cities, transport systems, neighbourhoods, workplaces, buildings and food systems to both use less energy and produce fewer GHGs. I am optimistic, mainly because the leading edge (world finance and democracies) have now started the turn away from carbon. Barely. Recycling our plastic bottles, eating organically, paying our fair share of the carbon tax and commenting about climate on media platforms will not cut it alone.

There are many beneficial net zero ways and means being practiced today in several sectors, but they are considered too new, too small and somewhat experimental to be part of the mainstream (e.g. widespread conservation tillage in agriculture, urbanizing the suburbs, net zero buildings). Due to vested interests and bureaucratic inertia, not to mention quite a lot of residual ignorance, the effort hasn’t even come close to the point where emissions have been reduced, not even during the moderate pause of a worldwide pandemic.

Until it does, we and several future generations will have to mitigate choking on the smoke during superheated summers and freezing under polar vortexes in winter brought on by jet streams distorted by a warmer Arctic Ocean. Adaptation is now equal with the reduction of emissions in importance.