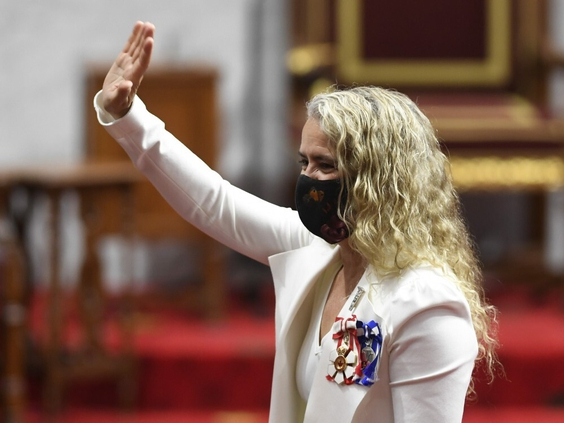 Though the Trudeau Liberals promised an “ambitious green agenda” ahead of the throne speech, the vision for the coming months unveiled Wednesday focused more on COVID-19 and its economic fallout.

The government reiterated existing climate promises and made a few new ones, including a fund meant to attract investments in clean technology. But the throne speech lacked a sweeping green vision — instead, it focused mainly on how the country will ride out the second wave of COVID-19, with the Liberals promising to create a million jobs and bolster the health-care system.

“The first foundation of the government’s approach is protecting Canadians from COVID-19,” Gov. Gen. Julie Payette said in the speech.

“This is priority number one.”

But his government walked back that rhetoric in recent weeks as COVID-19 case numbers began to tick upwards and experts began warning a second wave of the virus is imminent.

Although one portion of the throne speech focused on climate, the vast majority of the government's plans revolved around how it will manage COVID-19 and support the economy as the pandemic rages on.

In the speech, the government renewed its promises to reach net-zero emissions by 2050, plant two billion trees, and ban single-use plastics. It also pledged more investments in clean energy, funding to retrofit homes and buildings to reduce emissions, infrastructure to lessen the damage from climate-related natural disasters such as floods and wildfires, and moves to make zero-emission vehicles more affordable.

New promises in the speech included plans to launch a fund to bring in more investment in clean technology, and to cut the corporate tax rate in half for those companies. The government also promised to “modernize” Canada’s Environmental Protection Act.

Like most throne speeches, the one delivered Wednesday did not go into details about how the government would implement its plans, or assign anything a dollar figure. The government will release a fiscal update later this fall, Payette said.

In Wednesday's throne speech, the government reiterated existing climate promises and made a few new ones. But their plans lacked a sweeping green vision — instead, it focused on how the government will ride out the second wave of COVID-19. #cdnpoli

But Payette said action on the environment file would be a “cornerstone” of the government’s job creation measures, and the government would “immediately bring forward” plans to meet Canada’s 2030 climate goals.

“This is where the world is going,” she said. “Global consumers and investors are demanding and rewarding climate action … Canadians also know climate change threatens our health, way of life, and planet. They want climate action now, and that is what the government will continue to deliver.”

She also reached out to extraction industries, saying the government will “support” oil and gas and other natural resource sectors as they “transform to meet a net-zero future.”

“Canada cannot reach net zero without the know-how of the energy sector, and the innovative ideas of all Canadians, including people in places like British Columbia, Alberta, Saskatchewan, and Newfoundland and Labrador,” Payette said.

Payette also hinted that the government will boost types of mining, saying Canadian copper and nickel are “needed” for clean technologies.

At the same time, she said the government is committing to implementing the United Nations Declaration on the Rights of Indigenous Peoples — a landmark international document meant to protect Indigenous rights — before the end of 2020.

In a televised address to Canadians later in the evening, Trudeau kept his message focused on COVID-19, imploring Canadians not to lower their guard when it comes to public health measures.

On March 13, when the lockdown began, there were 47 new cases — yesterday there were “well over 1,000,” said Trudeau. “We’re on the brink of a fall that could be much worse than the spring,” he added.

Canada is at a “crossroads,” he said, and if Canadians can continue to do their part, it will change the trajectory of the country in the months to come.

“It’s all too likely we won’t be gathering for Thanksgiving, but we still have a shot at Christmas,” said Trudeau.

The speech from the throne also prompts a confidence vote in the House of Commons. Since the Trudeau government holds a minority of seats, it must win the support of at least one major opposition party to avoid an early election.

In response to the speech, Conservative deputy leader Candice Bergen — speaking for leader Erin O’Toole, who, along with Bloc Québécois Leader Yves-François Blanchet, has tested positive for the novel coronavirus — said her party would not support the speech.

Bergen said it was “full of Liberal buzzwords,” failed to deliver a “real plan to deal with the pandemic,” and did not address western alienation.

“We are very, very displeased,” she added, accusing Trudeau of trying to distract Canadians from the fallout of the WE scandal.

In a televised address after Trudeau's speech, Blanchet said his party would only vote for the speech if Trudeau promised “unconditional” transfers of health-care funding to Quebec, an outcome that is very unlikely.

That means the Liberals' main hope is in the NDP, but party leader Jagmeet Singh said he was undecided Wednesday night. Though he said the New Democrats don't want an election, Singh also said Trudeau can only count on his support if the government extends the Canada Emergency Response Benefit (CERB) and provides paid sick leave for all Canadian workers.

“My goal is not to threaten an election,” Singh said, adding that he isn't afraid to have one, either.

CERB is currently slated to end Sept. 27, with the Liberal government saying workers who are still using the benefit will be transferred into a reformed version of employment insurance. A new program called the Canada Recovery Benefit will also be implemented for people who need financial support but wouldn't normally qualify for EI.

In the throne speech, the government didn't specify plans for paid sick leave, but it did allocate $1.1 billion in July to give workers 10 days of federally supported time off if they get COVID-19.

Today, the government's throne speech was full of promises we’ve heard before

It doesn’t need to be this way

New Democrats will keep fighting for you & the help you need pic.twitter.com/qTzmV10o1d

Environmental groups largely welcomed the priorities outlined in the speech, but called for the government to do more and faster.

Though it's good to see the Liberals reaffirm their commitment do doing more for the environment, the government has promised that for years and is still falling behind on its current targets, said Environmental Defence executive director Tim Gray in a statement.

“Although today’s speech from the throne hits the right notes, the implementation of these promises will be what matters most, including in the upcoming economic update,” he said.

“All government spending on recovery and stimulus must align with a climate-safe future. Support for clean technology should not go towards the industries fuelling the climate emergency.”

Jessica Clogg, executive director of Vancouver-based West Coast Environmental Law, said in a statement that the speech was “promising,” but it won't be clear whether it counts as a “green and just” recovery until the government introduces policy to back it up.

“One contradiction that cries out to be addressed is how the climate goals set out in the throne speech tally with the federal government’s continued support for climate-destructive projects, such as the Trans Mountain pipeline and tankers project,” she said.

Though the government's stated plans are all “essential” to green recovery, a more “transformational approach” is required, Climate Action Network Canada said in a statement.

“Canada must diversify our economy away from fossil fuels while safeguarding workers and communities,” the statement said. “That means actively identifying and investing in the sectors that will be the source of Canadian jobs and prosperity for decades to come.”

This story was updated to include comments from Prime Minister Justin Trudeau, opposition politicians and environmental groups.

Evidently your reporter missed the 20 minutes of Climate Action announcements in Throne Speech 2020. As your publication is deliberately overlooking most of the Liberal Government of Canada's climate action from 2016 to 2020.