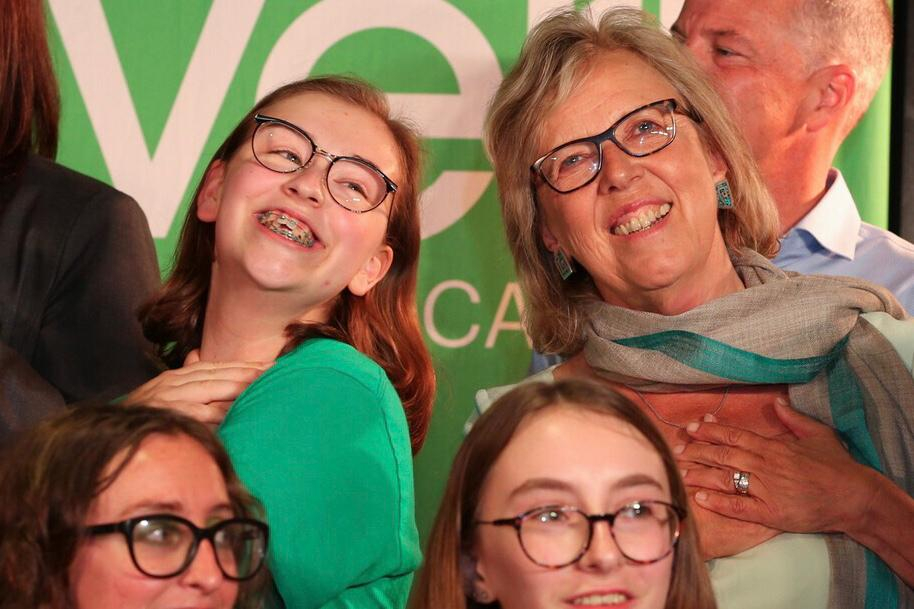 Emma-Jane Burian is seen with the former leader of the Green Party of Canada, Elizabeth May, in September 2019. Photo by Matt Watson
Previous story

Annamie Paul wasn’t Allie Rougeot’s first choice to become leader of the federal Greens, but the young Toronto climate striker is hoping the movement will have her ear regardless.

“My personal favourites were Dimitri and Meryam, although I also liked Amita’s ideas,” she said, referring to second-place Dimitri Lascaris, Meryam Haddad and Amita Kuttner, who are all positioned left of Paul on the political spectrum.

“I would have loved to see those younger, more-clearly-on-the-left voices get elected,” said Rougeot, who joined the party in order to vote in the leadership contest. “They brought in a lot of the strength and courage that young people are showing everywhere else.”

Instead, Toronto lawyer Paul won the race to replace longtime leader Elizabeth May on the weekend, becoming both the first Black person and the first Jewish woman to become permanent leader of a federal party, something Rougeot acknowledged as an “undeniable historic moment.”

Rougeot said she plans to write to the new leader to invite her to speak to climate strikers, but is not currently compelled to campaign on her behalf in the Oct. 26 Toronto Centre byelection Paul hopes will get her to Ottawa.

Winning the support of young people behind the climate strikes could provide Paul with a small army of motivated campaigners for that vote.

“To really attract people like myself, younger people, she really needs to listen and talk to people about what it is that we really want,” said Emma-Jane Burian, a first-year political science student at the University of Victoria who campaigned in support of Kuttner.

“Their platform and their approach to campaigning and leadership really inspired me,” she said of Kuttner, who is non-binary and uses they/them pronouns.

“I saw somebody who was a young person in politics not because they wanted to be in power or authority, but because they saw it as a necessity, just like me,” said Burian, who got involved with the federal Greens last year, frustrated with the lack of engagement from politicians to the massive climate strike movement.

She said Paul has a tough job ahead of her to unify a party that has been riven by internal conflicts and must first ensure everyone’s voices are heard.

Young climate strikers say new Green party Leader @AnnamiePaul has some work to do if she wants them to feel heard and engaged.

“We can disagree on ideology, we can disagree and have really important conversations about what should be brought to the table, but we must do it with respect and compassion for each other,” she said about infighting in the party.

During the leadership campaign, Paul backed the idea of a guaranteed livable income, a policy notion particularly popular with younger people, as well as universal post-secondary education and pharmacare.

She has also called for a ban on fracking and in support of Indigenous self-determination, and for a just transition to a green economy, a common refrain among several federal parties, including the governing Liberals.

Ahead of last month’s speech from the throne, where the Trudeau government set out its legislative priorities, Paul said she wanted to see a binding commitment to a 60 per cent cut in greenhouse gas emissions from 2005 levels by 2030, a 12-month extension of emergency benefits that includes students and people with disabilities, an inquiry into long-term care and the formation of a citizens' assembly to work on electoral reform.

She has also said she wants to strengthen the party’s shadow cabinet and back up its policy critique with so-called “knowledge clusters” and “portfolio brain trusts” to advise its members.

For Rougeot, one of the main organizers of Fridays for Future climate strikes in Toronto, Paul appeared “highly qualified, extremely intelligent, but possibly not willing to lead a real leap towards a new system.”

She said she’d like to see more attention paid to the overall “system of extraction and waste” she and other protesters are fighting against on the streets, including by pushing for polluting industries to be held accountable for cleanup and regeneration of areas they damage.

Rougeot also wants a push for more resources that allow Indigenous communities to “heal before they can truly thrive, starting with honouring the treaties and restoring their access to their lands.”

“I don't see any of that so far in what she says. For now, it seemed more to be ‘including them in the conversation,’ which is what the Liberals say, too, and we know that's not even close to enough — when it actually happens,” she said.

Rougeot, who made clear she was speaking in a personal capacity, said Paul’s climate policies centred mostly on “carbon-focused measures,” such as pricing, technology and renewables, and that “this is clearly not enough.”

“I found her mostly on the ‘reform’ side of things for each issue, when I think for me and many of the youth, we need a replacement of most institutions and systems, with a focus on co-designing it,” she said.

The seat Paul is trying to win later this month, which includes Toronto’s downtown financial district, will be a tough one for the minor party candidate to take. It has been in Liberal hands for more than two decades and became vacant when former finance minister Bill Morneau stepped down.

Paul ran in the riding in 2019, coming fourth behind Morneau and the NDP and Conservative candidates with almost seven per cent of the vote.

"party policy is more developed by the membership than the leader"

True! I just learned this recently during the leadership campaign. The young climate activists in this article will be happy to know that policy proposal submission just opened up and they have 1 month to get their proposals in assuming they can find 20 party members to sponsor them.