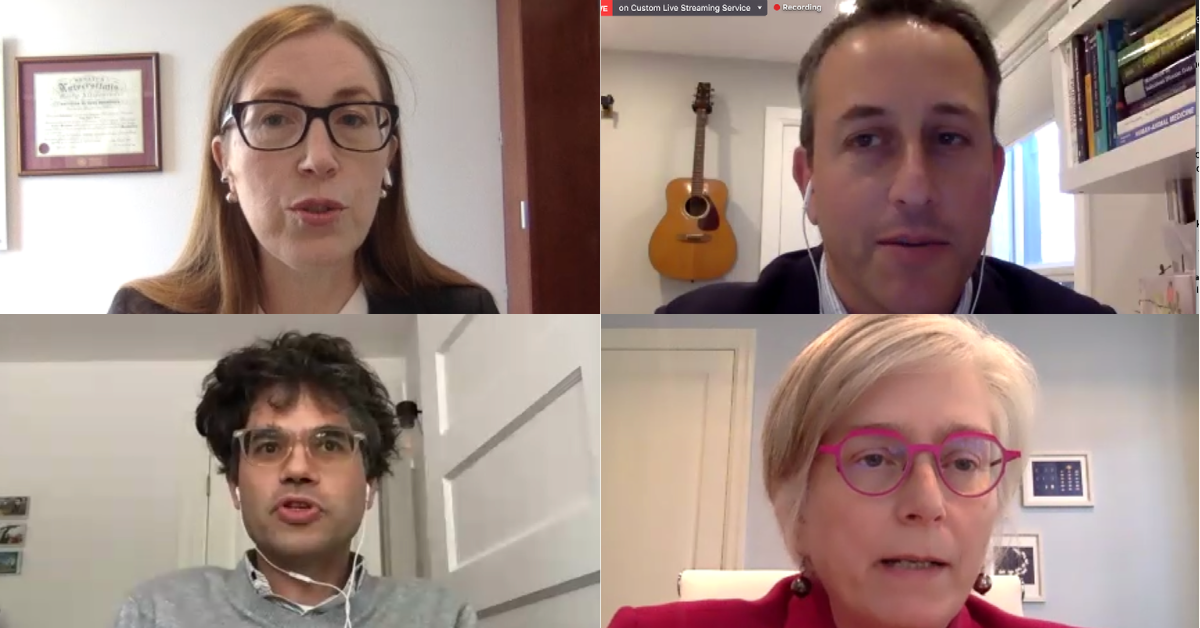 The health and ventilation experts Ontario’s education unions wanted to bring in front of a labour board to explain the dangers of the Ford government’s back-to-school plan never got that chance.

So the unions instead had them lay out those arguments to reporters on Wednesday, saying their recommendations would help avoid large-scale school shutdowns and limit the spread of COVID-19 between in-person classes and the wider community.

“Having kids crowded together can be a spur to disease transmission for the community as a whole, and that’s why we are raising our voices about the importance of improved ventilation, decreased class sizes, mask-wearing for all kids and the importance of cohorts,” said Dr. David Fisman, an epidemiologist at the University of Toronto’s Dalla Lana School of Public Health.

There have been more than 700 COVID-19 cases reported at Ontario schools since they reopened last month, including 111 recorded on Wednesday. Meanwhile, the daily addition of new cases overall in Ontario has ranged between around 500 and 700-plus in recent weeks, with most cases occurring in the Greater Toronto Area and Ottawa.

“Based on the available scientific evidence, and in light of increased community transmission, it’s critical to reduce school class sizes and school cohort sizes for students and education workers,” said Dr. Amy Greer, a Tier 2 Canada Research Chair in population disease modelling at the University of Guelph.

But with tens of thousands of students in the Toronto District School Board opting to learn from home, the country’s largest school board informed parents late on Tuesday that some 570 elementary teachers will be moved out of classrooms to bulk up its virtual school.

That will mean combining some in-person classes into larger groups as the TDSB’s virtual school prepares to add around 3,000 more students following a deadline last week for them to transfer between the two learning options.

Fisman, who is advising the government on its COVID-19 modelling, said a belief that children younger than 10 are unlikely to get infected or pass the virus to others “is likely wrong” and that masks should be worn in every Ontario classroom from junior kindergarten on, rather than from Grade 3 as current provincial rules state.

Jeff Siegel, a professor of civil engineering at the University of Toronto, said that in addition to wearing masks and keeping apart, students and education workers also need well-ventilated spaces to limit COVID-19 spread.

“We have to identify and correct the environments that are poorly ventilated, and then we have to add ventilation as much as we can in those spaces, and use central and portable filtration to further reduce the risk,” he said.

In older schools where it may not be possible to improve ventilation, he said filtration would be more important, noting that portable filters are easily deployable and flexible, able to be targeted at individual classrooms and controlled by the teacher.

The four unions representing 190,000 teachers and education workers in public English-language elementary and secondary schools, Catholic schools and French-language schools across the province filed a joint complaint to the Ontario Labour Relations Board regarding their health and safety concerns about the back-to-school plan in late August.

The labour tribunal dismissed the complaint last week, saying it did not have the jurisdiction to consider the merits of the complaint as applied to the whole province.

“This mammoth task is being downloaded onto teachers and education workers at a time when they are already stretched thin,” said Susan Ursel, a lawyer at Ursel Phillips Fellows Hopkinson LLP who represented the unions in their submission to the labour relations board.

Just ahead of the unions' news conference, Education Minister Stephen Lecce released a statement thanking “all front-line workers in education” while “calling on our teacher unions to work with — not against — our efforts to deliver safe schools.”

Liz Stuart, president of the Ontario English Catholic Teachers' Association, said the unions have been trying to work with the Progressive Conservative government since March.

“Each and every time we have attempted to do that, we've been shut out and shut down,” she said. “Their version of working with them is that we just agree with everything they’re bringing forward, which is just unconscionable because we know that it’s not working.”

Conservative governments have been chintzing education for decades.......unless it comes to private schools. In Alberta at least, those institutions receive public tax dollars so that the children of the wealthy receive state of the art education, with noticeably smaller class sizes.

It's not that different from long term care........the road to privatized warehousing is just being built a bit later in time. Covid is waking most parent's up to the real consequences of jamming too many young bodies into crowded, poorly ventilated and inadequately cleaned spaces.........but nevermind.

The msm won't make a big case of any student, teacher or support staff deaths. Contact tracing back to lost grandparents won't be pursued either......and when its all over, if there are any substantive changes at all.....it will be changes that encourage privatization of education, the delivery of corporate educational materials, and if possible the decertification of teachers.

Breaking professional teacher's unions has to happen after all...........if the needs of our children are to be met. Paying teachers less will save us the needed moola to put up those warehouses for the future benefit of all our kids.

It's money we adore; not children.

At this point in Toronto new

At this point in Toronto new daily infections outside of LTC homes are double or more what they were at the peak of the spring "wave."
And still the obstructionist provincial government will not close bars, or indoor dining, where 44% of all new cases originate. Instead, they opened casinos and criticized the school boards whose plans they kept kiboshing, and announced again that they're releasing more money: but from news reports, it seems that no one's seen any of what was announced in the first round, and they're not holding their breaths this one.
Meanwhile, some restaurants are closing for all but pick-up and delivery service, voluntarily, because they value their brand and don't want to be responsible for making people sick.
The City officials are doing their best, pleading with residents to close their social bubbles to households only, to spend Thanksgiving within households only, and to revert to staying at home and going out only as necessary for groceries, school, work and exercise.
The province's own statistics show an incidence of positive results in up to 8 and 9% of tests, whereas apparently the epidemiological standard accepted in cities and many countries, for need to bring in further measures, is anything over 3%.
So it's not only seniors and kids he's throwing to the wolves, but workers, caregivers, etc. as well. Because the higher the overall incidence, the more likely those workers are to get caught up in the illness statistics.
But he insists he needs to see "more numbers." More numbers of what, one has to ask. Bodies?
I wonder if his behaviour amounts to negligence causing death. By now it's only all to clear that he's the one making the decisions, not health professionals. Not science. Not anything but ... what ... hatred toward those who didn't vote for him last time around? I wonder if he thinks that's a likely path to re-election.