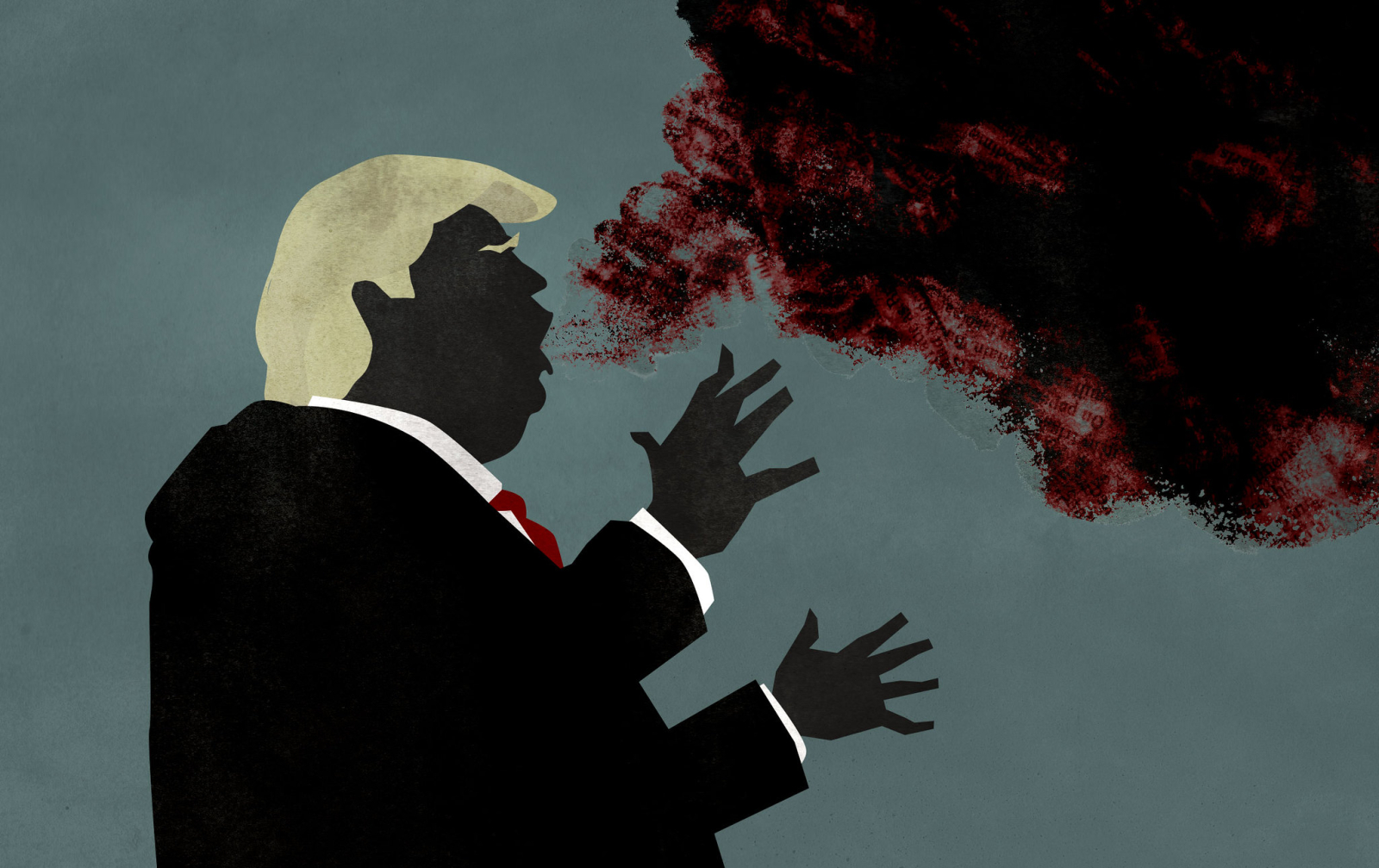 If President Donald Trump wins a second term in November, that would likely mean another four years in which the U.S. makes no progress on climate. Illustration by Jared Rodriguez/Truthout via Flickr
Previous story
Next story

This is the second of a series of stories Emma McIntosh is writing as part of National Observer's special coverage of the U.S. election. Read the first, third, fourth, fifth and sixth stories here.

Every summer, wildfire smoke on the West Coast turns skies in cities on both sides of the United States-Canada border an eerie, apocalyptic orange.

That’s not the only thing wafting across the border. Emissions from coal-fired electricity plants in the United States contribute to a changing climate globally and in Canada, which is warming twice as fast as the global average.

In the crucial years ahead in the fight against the climate crisis, each country’s environmental policy choices will impact the other. And with the U.S. choosing between presidential candidates with radically different views on what to do about the environment, this election feels like a crossroads, said Kathryn Harrison, a University of British Columbia political scientist who specializes in climate policy.

“It would be night and day,” Harrison said of the choice facing American voters.

President Donald Trump, who is seeking a second term, has questioned the science of climate change. His administration has revived pipelines that were halted under former president Barack Obama, supported the use of emissions-heavy coal, dismantled 70 environmental rules (and counting), opened up the Arctic National Wildlife Refuge for oil drilling and pulled the U.S. out of the Paris Agreement.

“It'll start getting cooler. You just watch,” Trump said in September, a statement that clashes with the scientific consensus.

A Trump victory would mean another four years in which the U.S. makes no progress on climate, Harrison said.

“If Trump wins ... I think it would be disastrous for the planet, for people’s health,” she said. “That would be a very distressing outcome.”

It includes a US$2-trillion plan to get the country to net-zero emissions by 2050 ⁠— Canada’s Liberal government has made a similar promise ⁠— and proposals to crack down on top polluters who disproportionately harm low-income communities and communities of colour. The platform also includes pledges to increase the country’s use of clean energy, help fossil fuel workers transition and build green infrastructure to drive economic recovery from COVID-19.

With voters choosing between presidential candidates with radically different views on what to do about the environment, the U.S. #Election2020 feels like a crossroads. Here's how America's climate choice this November will affect Canada. #cdnpoli

“When I think about climate change, the word I think of is ‘jobs,’” Biden said in August.

In general, his plan would bring a “higher level of motivation in terms of ambition” than Trump, Harrison said.

Even beyond the climate impacts, the fact that the U.S. is Canada’s top trading partner means America’s path forward will shape our economy as much as theirs.

A Biden victory could accelerate broader shifts to clean energy and have a huge impact on Canada’s oil and gas sector, said Warren Mabee, director of the Institute for Energy and Environmental Policy at Queen's University.

“I think the social movement that is going on right now is going to demand a shift to cleaner energy,” Mabee said. “I think Biden will bring it in faster.”

Right now, Biden is ahead in the polls. But Trump’s COVID-19 diagnosis has cast a shadow of uncertainty over the entire campaign, and no outcome is guaranteed.

President Trump points to forest management as the cause of the wildfires in the West, but avoids specifics on his climate change beliefs. #Debates2020 https://t.co/McrHYPnMbj pic.twitter.com/EIBsZYXZ1W

‘The longer we are out of line with the U.S., the harder it is’

Historically, Canada has followed the U.S. on climate action. That’s because our markets are very integrated, and it can be challenging for Canadian businesses to compete with American ones if they’re subject to different rules, Harrison said.

We’ve been out of step before. The U.S. and Canada originally committed to similar climate targets under the 1997 Kyoto Protocol, but the U.S. dropped out in 2001. When Canada tried to forge ahead anyway, industries lobbied against it, frustrated that they’d have harsher rules than businesses south of the border, Harrison said.

“There was significant risk that Canadian manufacturers would be at an economic disadvantage,” Harrison said. “We didn’t (implement) the kind of policies that were needed to meet our targets, and eventually the Harper government withdrew.”

Our two countries are currently out of step again: “We're ahead of the U.S. on carbon pricing,” said John Dillon, a senior vice-president at the Business Council of Canada.

Canada has a carbon tax that’s scheduled to increase until 2022, while the U.S. has no such national policy.

Though Canada’s federal and provincial carbon tax systems include adjustments to help Canadian businesses compete against American ones, that flexibility doesn’t fully even the playing field, Dillon said. Another four years with a president who doesn’t make climate a priority “doesn’t really change much” in that department, Dillon added.

Difficulty could arise further down the road, Harrison said. Canada’s federal government will have to increase the carbon tax significantly beyond what’s planned for 2022 if we’re to meet our current emissions-reduction targets under the Paris Agreement, a 2019 report by the Ecofiscal Commission found.

The Liberal government has refused to speculate about whether that price will increase beyond 2022. It will be politically challenging for any government to raise the tax if U.S. industries aren’t subject to similar rules, Harrison said.

“The longer we are out of line with the U.S., the harder it is to raise that carbon price … after 2022 because Canadian industries will complain,” Harrison said.

Neither Trump nor Biden has outlined plans for a carbon price, and previous attempts to pass such legislation in the U.S. have failed. But Biden has said he would, if elected, impose adjustment fees or quotas on carbon-intensive imports from countries that don’t meet their climate obligations.

“They could only justify that legally if they had their own carbon pricing regime in the United States,” Dillon said.

It’s unclear, however, what such a scheme could look like and how it would affect trade between the U.S. and Canada.

A Biden victory doesn’t guarantee a walk in the park for environmentalists ⁠— passing legislation is up to Congress, and it’s unclear which party will control the U.S. Senate and the House of Representatives. Biden was witness to such pushback when he was vice-president to Obama, who ran into significant roadblocks when he tried to pass climate legislation. Biden would likely also face a steep lobbying effort from industry in the U.S.

“I think we would be in the nice position of being able to follow a leader again,” she said. “It’s hard for Canada to lead because we’re the small player in this relationship. When the U.S. starts leading, it reverberates around the world, but especially in Canada.”

The U.S. under a Biden administration could be a good influence on us, Harrison said. If the U.S. starts using stricter emissions standards for cars, for example, Canadian automakers would likely need to do the same since auto production in North America is quite integrated.

Canada might also be in a good position to do business with the U.S. if it were to pursue Biden’s net-zero plan, Dillon said. Many Canadian provinces have excess hydroelectricity that could be sold to the U.S. if new power lines could be built, and many of the precious metals needed for clean technologies such as solar panels and electric vehicles are made in Canada.

“That's certainly an opportunity for Canadian manufacturers,” he said.

In other ways, it might be more complicated, Mabee said. The U.S. is a major importer of Canadian fossil fuels, and if demand there drops, that would be troubling for Canada’s oil and gas industry. Biden has already said he would cancel the Keystone XL pipeline, which would carry Alberta oil to American refineries on the Gulf Coast.

Mabee said he believes global markets are shifting more towards clean power anyway, and although a Trump victory wouldn’t change that, a Biden win has the potential to accelerate it. Canada’s fossil fuel industry must figure out how to harness its technology and knowledge to adjust to a world that increasingly relies on clean energy, he added.

“I think what the oil industry needs to be doing is really looking at this as a global change in markets,” Mabee said, pointing to energy giant BP’s prediction last month that oil demand could peak this decade and never recover.

“The writing is on the wall.”

To enact his climate agenda, Biden would have to win the election. And although he’s favoured right now, a lot can happen between now and Nov. 3.

To take the White House, the former vice-president will have to win over both progressives and centrists, some of whom may have voted for Trump in 2016. And when it comes to the climate file, that can result in an interesting balancing act.

Take, for example, Biden’s outlook on oil and gas. While he has spoken out against Keystone XL, he has also said he won’t ban fracking, which is an economic driver in certain swing states, like Pennsylvania, that Biden needs to win.

“I think that’s part of the calculus,” Harrison said.

Environmental organizations criticized Biden’s climate goals when he was seeking the Democratic nomination. He’s since won a few over ⁠— he struck a committee that included popular progressives like U.S. Rep. Alexandria Ocasio-Cortez and released a more expansive environmental plan.

And although Biden has distanced himself from the idea of a Green New Deal, calling it “not my plan,” it does have some similarities to the Democratic nominee’s climate strategy.

We won’t know how well that plays with voters until the election results are tallied.

No matter which way the vote goes and which path the U.S. chooses on climate, it will have ripple effects for Canada, Harrison said. Because the U.S. has a large economy and a significant share of global emissions, it has a huge impact on international discussions around climate, even beyond repercussions for trade.

Harrison pointed to some famous words spoken by the late prime minister Pierre Elliott Trudeau in 1969.

“Living next to you is in some ways like sleeping with an elephant,” he said in a speech in Washington, D.C.

“No matter how friendly and even-tempered is the beast, if I can call it that, one is affected by every twitch and grunt.”

When it comes to environmental rules, that remains the case for Canada, Harrison said.

“Canada is still in this tricky situation.”

Less like night and day and more like night and twilight if you ask me. I really don't see a Biden administration having any real intention to follow through on any of that; the Biden approach, left to himself, would be more like "Neglect that's a bit more benign". But a Democratic administration would resist a little less hard if people are able to mount a lot of political pressure for action.

go our own way, following the

go our own way, following the US does not end well unless they change. Quit making every decision on trade and more on the right thing to do, it will turn out better