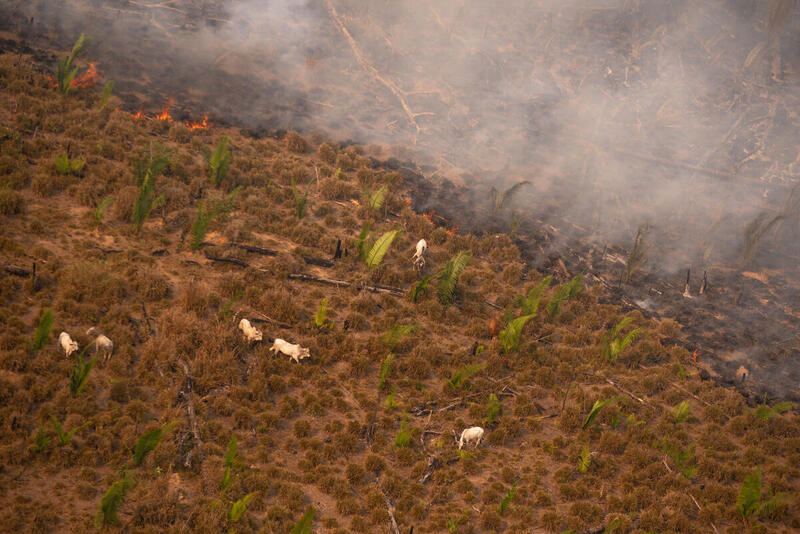 Fires and deforestation in the Brazilian Amazon increased 30 per cent last year, with minimal action from the Bolsonaro government to stop them — and the trend has continued into 2020. Photo by Cristian Braga/Greenpeace
Previous story
Next story

The assessment, which was released last week, is a standard part of trade deal negotiations meant to flag any proposed environmental issues that could arise from increased trade. Focused largely on potential impacts in Canada, it makes scant mention of devastating deforestation and fires in the Brazilian Amazon driven by cattle ranching and soy production.

Brazil is the region’s largest economy and the deal could increase its agricultural exports to Canada by about $10 billion.

“This environmental assessment of the Canada-Mercosur trade deal appears completely divorced from the reality unfolding in Brazil,” said Reykia Fick, nature and food campaigner with Greenpeace Canada, in an email.

Deforestation in the Amazon increased by 30 per cent in 2019, boosted by the Bolsonaro government’s anti-environment agenda. In 2020, more than 12 per cent more fires burned between January and September than last year, covering roughly 1.8 million hectares.

The region plays a critical ecological role, capturing vast amounts of carbon, regulating the region’s climate and hosting some of the planet’s most biodiverse ecosystems. It’s also home to hundreds of Indigenous nations whose human rights and cultural survival are threatened by deforestation and violence from ranchers and loggers.

There is “a possible risk” of deforestation, soil erosion and biodiversity loss arising from increased agricultural production as a result of the deal, the environmental assessment notes. However, a 2019 report by a coalition of climate and environmental researchers about the situation in Brazil found a close correlation between deforestation, fires and industrial soy production and ranching.

The document states that the deal would include provisions that “may … help mitigate negative (environmental) impacts, notably in relation to … agricultural practices,” a note that doesn’t convince Scott Sinclair, director of the Trade and Investment Research Project at the Canadian Center for Policy Alternatives.

“We have a model of free trade agreements that have powerful enforceable rights for traders and investors, but the environmental standards are weak, and they’re largely unenforceable. And the same is true of labour standards,” he said.

Sinclair sees no reason this lax approach to environmental and labour regulations would be any different with this agreement, a concern reinforced by recently leaked documents from a similar deal now being negotiated between the European Union and Mercosur countries.

Environmental violations are not considered “essential elements” in that document, meaning that sanctions or other enforcement measures can’t be implemented if a country violates the environmental standards outlined in the deal. Similar provisions could easily be included in the proposed Canada-Mercosur deal — a bad sign, especially in light of Brazil’s current political situation.

Brazil’s environmental legislation is currently being gutted by the Bolsonaro government, Fick said, with the administration attempting to legalize land grabs of protected areas and Indigenous territories while defunding the country’s environmental protection agency.

And despite thrice mentioning that Canada and Mercosur countries will “maintain high levels of environmental protection” and “improve their (environmental) laws and policies,” the assessment offers no details on how those legislative standards will be enforced.

“It’s a perfect storm where the regime is indifferent or even supportive of encroachment on this vital ecosystem to the point where experts think it’s threatened with collapse, but somehow that doesn’t factor into this environmental assessment,” said Sinclair. “If we entered into an agreement with Mercosur … we’d be sanctioning (and) legitimizing those practices.”

This is especially true as the environmental assessment skirts around the direct relationship between the Brazilian government’s policies and deforestation and fires driven by agriculture and cattle ranching.

Instead, it frames the environmental devastation as a technological problem that free trade between Canada and the Mercosur region could help solve by “broaden(ing) farmers’ access to new tools (and) enable(ing) a reduction in the use of pesticides and fertilizers, as well as greenhouse gas emissions.” That’s a baseless claim in light of Brazil’s current political, social and economic situation, Fick said. Nor is it the only red flags she sees in the document.

“The trade and Indigenous Peoples chapter is particularly worrying and disconnected from reality,” she said.

Still, the deal is not yet complete.

“There have been no new negotiations since last year’s forest fire season in the Amazon. In any potential future negotiations on an investment chapter for a Mercosur free trade agreement, Canada would reaffirm our right to regulate to achieve legitimate policy objectives such as respect for Indigenous peoples, and the protection of the environment,” said a spokesperson for the office of Mary Ng, minister of small business, international trade, and export promotion in an email.

“Indigenous leaders in Brazil are warning that the conditions (in the Amazon) threaten their survival — as land grabbers move into their lands, violence increases and the government refuses to recognize their rights,” Fick explained.

The assessment also only considers the increase in greenhouse gas emissions from Canadian companies that might result from increased trade with the region, not the overall rise in emissions from pre-existing trade arrangements or deforestation and forest fires in Brazil. Sinclair explained that such a narrow focus — standard practice for these kinds of environmental assessments — makes it possible to avoid the thornier environmental issues. And it also misses the point.

“It misses the big picture. It doesn’t look at the impacts of a free trade agreement as an institutional framework that’s destroying the Amazon rainforest in Brazil,” he said.

Editor's note: This article was updated on October 16, 2020, to include comment from the office of minister Mary Ng.

The rapacious exploitative colonialism of European powers toward the "new world" continues apace. We are totally without conscience when it comes to destroying other continents that the U.S. president has bluntly termed sh*thole nations. Well, who turned these once massive ecologically intact places into utter wasteland?

Most international trade deals are written primarily by participants from the particular industries that are expected to benefit, in co-operation with their respective "captive regulators" in government. Mutual back-scratching prevails.

Why would anyone be surprised that their environmental consequences are treated as "externalities", and therefore of no particular interest to the negotiators on either side?