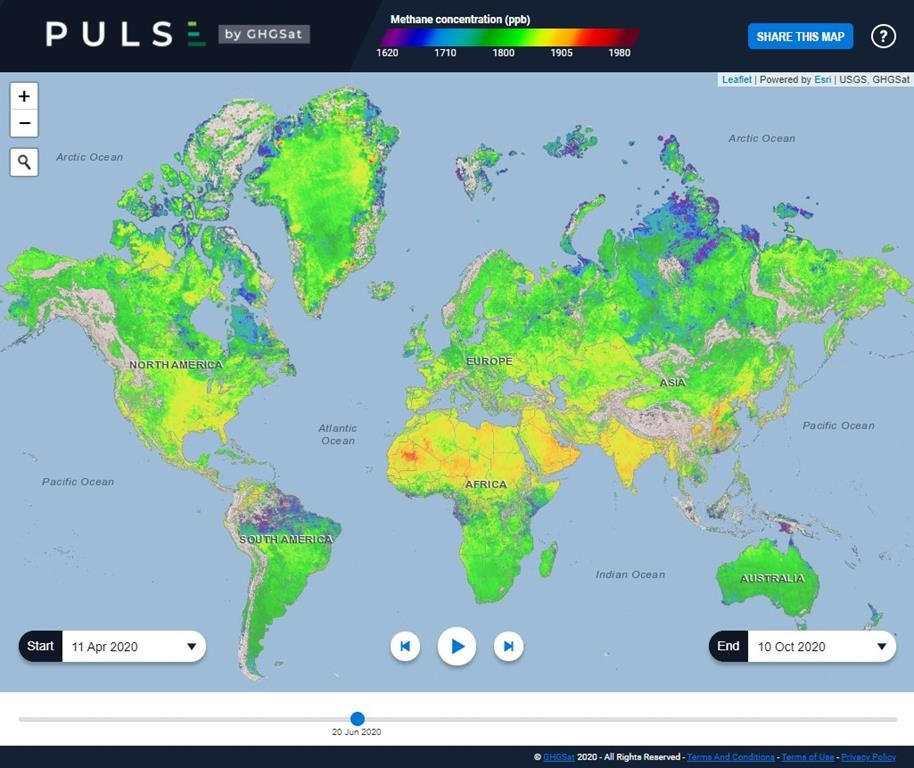 On the free version of the map, the data is refreshed weekly to indicate average methane emissions for the previous month. Image by GHGSat
Previous story
Next story

MONTREAL — A Montreal company has unveiled what it boasts is the most accurate map of global methane concentrations ever made.

On Wednesday, GHGSat unveiled Pulse, an interactive map available for free online that has a resolution of approximately two kilometres by two kilometres.

GHGSat produced the map from data generated by the company’s satellites along with information from partners such as the European Space Agency. A paid version of the map with a resolution of 25 metres by 25 metres is also available.

Methane accounts for a quarter of all man-made greenhouse gas emissions. According to the science journal Nature, methane emissions have risen by nearly 10 per cent over the past two decades — mainly from agriculture and the natural gas industry.

Company president and founder Stephane Germain told reporters earlier this week when he introduced the map that he hoped it will "stimulate discussion and inspire people to ask questions."

On the free version of the map, the data is refreshed weekly to indicate average methane emissions for the previous month. The map shows the evolution of methane concentrations over the last six months.

"We know that there is not a lot of industrial activity in Northern Canada," she said.

“The red areas (on the map) are natural sources of methane. One of the important consequences of climate change is the impact on permafrost melting, which can influence methane emissions. ”

GHGSat president and founder Stephane Germain told reporters when he introduced the map that he hoped it will "stimulate discussion and inspire people to ask questions."

In April and May, when the northern region is still largely covered with ice and snow, it shows up on the map in green and blue — colours that correspond to low methane concentrations.

"But when you go into summer — June, July, August — the colours start to change to red," Germain said. "It is reasonable to assume that there is more methane due to the melting permafrost."

About 40 per cent of the world’s annual methane emissions are from natural sources, Germain said. The rest is attributed to human activity.

"The global warming potential of methane is 84 times greater than that of carbon dioxide — the greenhouse gas we may be most familiar with," Gallagher said.

"It is important to know where, when and how methane enters the atmosphere. Reducing methane emissions is an important tool in the fight against climate change.”

Given the company's comments

Given the company's comments about drift, one wonders what impact the seasonal changes in direction and range of prevailing winds might be.

Thank you for this. Very

Thank you for this. Very interesting. Why are northern Africa (especially NW) and India such large sources of emissions? Or are they coming from somewhere else?