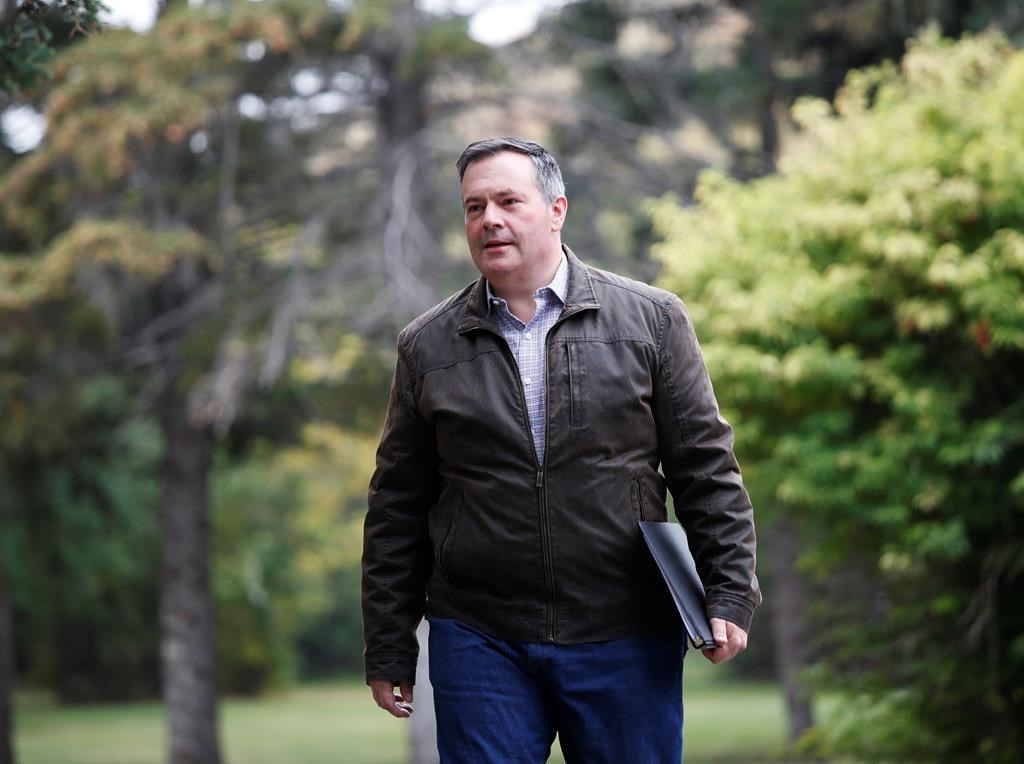 Alberta Premier Jason Kenney arrives for an announcement at a news conference in Calgary, Alta., on Tuesday, Sept. 15, 2020. File photo by The Canadian Press/Todd Korol
Previous story
Next story

His United Conservative government contends foreign interests have been working to undermine the industry for years.

The inquiry, headed by forensic accountant Steve Allan, was initially expected to report its findings this summer and its deadline was most recently extended to Oct. 30.

A lawsuit filed by environmental law firm Ecojustice argues the inquiry is politically motivated, biased and outside provincial jurisdiction

Kenney also says his government would be introducing legislation next year to make it illegal for foreign interests to fund political action committees.

He says the Canadian Energy Centre, a war room meant to counter what the UCP government considers misinformation about the oil and gas industry, will ramp up again after the COVID-19 pandemic put it on hiatus.

Kenney made his remarks Saturday during a livestreamed question-and-answer session capping off the party's convention, which was held virtually over two weekends due to the COVID-19 pandemic.

Earlier in the day, federal Conservative Leader Erin O'Toole told party members that Alberta has responded to the COVID-19 pandemic better than the federal government.

O'Toole addressed the meeting by livestream from Ottawa.

He said Liberal Prime Minister Justin Trudeau's talk of Canada "building back better" from the COVID-19 pandemic is code for excluding workers in the energy, forestry, auto and steel sectors.

O'Toole said the Liberals were confused and late at every step of the pandemic response, including closing the border, procuring personal protective equipment and implementing rapid testing.

He said Kenney has taken charge and not waited to make things happen, citing an early lead on testing as an example.

Alberta's daily case count began to surge over the 400 mark this week, up sharply from about a month ago when new infection totals stood in the mid-100s.

While Quebec, Ontario and Manitoba have toughened restrictions on certain businesses and activities in recent weeks, Kenney has said his government prefers encouraging personal responsibility over imposing new shutdowns on Alberta's frail economy.

Alberta chief medical officer Dr. Deena Hinshaw has warned the province is in the "danger zone" as hospitalizations and intensive care admissions rise.

Next year? Really? why

Next year? Really? why bother? There are so many more REAL problems all that money and brain power could be used to solve.
(Sigh) I suppose the Alberta government is having trouble finding jobs for it's multitude of inadequate politicians and public servants.

I hope Jason Kenney will have

I hope Jason Kenney will have an equally deep enquiry into the oil lobby. And that he will make it illegal for foreign companies to own Canadian resources

MAGA=Make Alberta Go Away. is

MAGA=Make Alberta Go Away. is how I have felt since I went to Uof C in 1974 and cringed at the "let the eastern bastards freeze in the dark" bumpersticker oil hysteria, paid for by Texas oil interests of course. The never ending fantasy that a national oil plan to make sure Canadian energy needs were protected was some terrible communist plot could only have come from a fevered cold-war state like Texas or ....anywhere in the US really.
What level of civil society destruction is required to break through the cradle to grave propaganda practised lo these past hundred odd years in Texas north?
How miserable does life under KKKenney have to get before Albaturdens throw the bastards out of power for good? Maybe the BC election offers some future hope for a shift to the real world of community not corporate health.