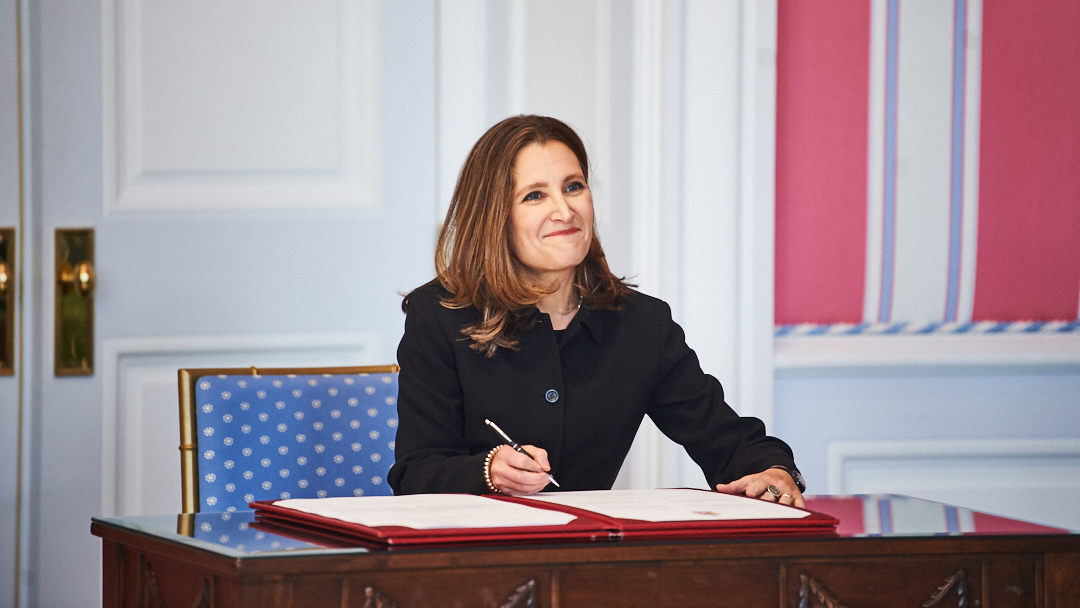 You have to hand it to the Canadian Taxpayers Federation. In the face of a pandemic and an unprecedented surge in government spending and economic support that has widespread public approval, the organization remains steadfast in its belief that governments ought to be doing less rather than more.

In a recent open letter to Finance Minister Chrystia Freeland, the CTF argued that “Canada’s debt is about to hit $1 trillion. Temporary programs are too expensive to go on forever. We need an economic recovery that’s realistic in the long term.”

Its proposed solution? Cutting taxes, reducing government spending and salaries and defunding the CBC. If nothing else, the CTF is consistent.

The Canadian Taxpayers Federation traces its roots back to a 1990 alliance between the Saskatchewan Federation of Taxpayers and something called the Resolution One Association, which Link Byfield — son of Alberta Report founder Ted Byfield — created in 1989.

Its goal? “To do all things and take all steps possible to have government at all levels recognize and realize that deficit financing cannot continue and must be opposed by reductions in expenditures rather than increases in taxes.”

And for the last 30 years, it has lived up to that objective by campaigning against every new tax measure imaginable and for every possible reduction in pay or compensation for public-sector workers.

But make no mistake: Despite its predictability, the Canadian Taxpayers Federation has punched way above its weight over the course of its existence. After all, the organization only has five voting members, and it counts just 235,000 supporters across the country — just a smidge more than 0.6 per cent of the Canadian population.

And yet it is consistently quoted in, and featured by, mainstream media organizations across the country whenever there is a dollar of government spending worth talking about. Its ubiquity may drive progressives up the wall, but they can’t pretend its media strategy isn’t effective.

Meanwhile, the organization has served as a de facto farm team for the Canadian conservative movement, with high-profile alumni serving in a wide variety of offices and roles. The biggest success is unquestionably Alberta Premier (and former CTF CEO) Jason Kenney, but the roster of former employees includes elected officials like former Wildrose MLA Derek Fildebrandt and Conservative MP John Williamson and media personalities like columnist Candice Malcolm and Toronto Sun editor Adrienne Batra, along with a litany of current and former political staffers across the country.

All of that is at risk right now, though. While it has long managed to cloak its obsession with fiscal austerity in the rhetorical finery of fiscal populism, the current moment is putting the lie to all that. After all, millions of Canadian businesses and households have gotten by this year because of the investments the federal government made in programs like the Canada Emergency Response Benefit (CERB) and the Canada Emergency Wage Subsidy (CEWS).

And what was the Canadian Taxpayers Federation’s reaction to those programs? Worrying that people might be fraudulently claiming benefits on behalf of their horses. No, really.

"(The Canadian Taxpayers Federation's) allergic reaction to any new government spending may have played well in more normal times, but recent times have been anything but normal," says @maxfawcett.

But for all the joking about horses that greeted federal director Aaron Wudrick’s suggestion that equine-related CERB fraud might be worth the government’s attention, his organization's response to the pandemic has revealed the danger that can come with being a one-trick pony. Its allergic reaction to any new government spending may have played well in more normal times, but recent times have been anything but normal.

Don’t expect the Canadian Taxpayers Federation to change its tune, though. Rather than reckoning with the new political landscape we’re in, it will almost certainly try to bring us back to the one we just left behind. It will demand spending cuts, reject new taxes or tax increases and fearmonger about debt and deficits, as Ontario director Jasmine Moulton did in a recent op-ed for the Toronto Sun.

“Perhaps the scariest part of Ontario’s recent budget was the forecast of double-digit deficits for years to come,” she wrote. “Each Ontarian’s portion of the provincial debt is already $25,000. Add in federal debt, and that number grows to $50,000. That’s $200,000 in government debt owed by a family of four.”

The real question is whether the public, and the media, will be as open to the familiar prescription of spending cuts and lower taxes as they have been in the past. That’s because the organization is starting to sound a little bit like the doctors who continued practising bloodletting deep into the 19th century long after more effective and credible procedures had been developed.

Yes, the Canadian Taxpayers Federation will talk about the dangers of inflation, even though we haven’t seen any of it for the better part of 20 years. And it will swear up and down that Canadians can’t afford a single penny of new taxes, even though that’s demonstrably false. But after a year in which government spending saved millions of Canadians from outright ruin, those Canadians may have finally realized that the treatment being prescribed by the Canadian Taxpayers Federation is worse than the alleged disease.

We should all appreciate an

We should all appreciate an organization such as the CTF. ALL political parties and Government bureaucracy have proven beyond a doubt that they are not capable of responsible spending. They need to be held accountable for their actions and the CTF has done so on many occasions. It is questionable journalism that would promote the idea that spending scrutiny is not required. Unless you happen to be a recipient of the Liberal Media favouritism purchase program. If you feel you are not paying enough taxes you can donate to the Government if you want. I personally prefer to use my money supporting the Canadian economy than giving to Politicians to support their friends and families (WE charity to start a very long list).
We all should be thanking the CTF, not trying to tear them down.

The CTF doesn't "scrutinize" spending. That would require a position that some spending is good and other spending is bad, with some way of evaluating differences between the two. The CTF's stated ideology is that ALL spending is bad. Thus it can't scrutinize or evaluate spending--give it an example of spending and it can only give one answer about it.
Therefore, journalism trashing the CTF in no way trashes the scrutiny of spending.
Incidentally, on the topic of "Liberal" media, virtually every single newspaper in the country regularly every election endorses the Conservatives. The one exception is the Toronto Star, which does usually endorse the Liberals. And of course none of 'em ever endorse the NDP, except I think one time the Torstar did. None of this is a surprise considering they're all owned by billionaires. Except our hosts at the National Observer.

That Ontario director: "That

That Ontario director: "That’s $200,000 in government debt owed by a family of four."
Um, and? Two hundred thou of debt is nothing these days, especially at the tiny interest rates the government of Canada pays. One of my daughters just took on nearly a million bucks in mortgage, and only managed to have it that small by going far out in the burbs to a town it takes a ferry to get to. And I don't think she gets an interest rate as favourable as the Canadian government.
For that matter, the latest round is mostly owed to the Bank of Canada, ie, to itself. Which brings us to a key difference between sovereign governments, on one hand, and households, on the other: Households generally don't own and can't print their own sovereign currency. Nor do the fiscal policies of individual households have major impacts on the economy.
The Canadian Taxpayers' Federation aren't fools. The key people at least know this stuff perfectly well. They're grifters who represent constituencies that profit from privatization and austerity.

After 30 years of demanding

After 30 years of demanding that the Social Safety Net be slashed and burnt and promoting unsustainable tax cuts, the Pandemic revealed that the Net is not a Net

The CTF doesn't go far enough. They complain about the level of taxes in Canada but never acknowledge the value in services and infrastructure taxes bring to society. They have never calculated that value at a large scale, but if they determine the value is too low for the tax dollars spent, then let's see their plan.

Here are a few proposals for the CTFers out there to bring to the public for consideration:

- Privatize the healthcare system. Use the US as a model, and let a small clutch of private insurance companies have complete control over premiums and services offered, and to discontinue said services at their own discretion. Leave the poor, disadvantaged and cut-off policy holders on expensive medication and treatments to their own fate.

- Privatize the sewer and water systems and watch fees climb when private utility companies inevitably merge to create another monopoly with the sole purpose to maximize profits by raising utility bills.

- Donate oodles more capital to buying out politicians (otherwise known as "donations") with the unexpressed purpose of not regulating roads, healthcare and utilities.

C'mon, CTF. Let's see you present these ideas to the public -- or at least admit that taxes are actually very reasonable for the better part. Should the above scenarios come to pass, then you'll see toll avoidance behaviour like trespassing, walking, biking and e-commuting, and probably a revolution in public transit planning and transit-oriented development in public corridors just to be able to afford mobility. You'll also see more people dying in the streets and thousands of backyard biffy's appearing beside wells.

This is just to illustrate that, as Nobel economist Joseph Stiglitz noted, reasonable government spending is crucial to improving and maintaining the quality of life. Also, deep debt and large-scale spending is justified in emergencies, like pandemics. He is arguably more experienced and smarter than all CTF board members put together.