By Christopher Reynolds | News, Politics | November 20th 2020
#972 of 1329 articles from the Special Report: Coronavirus in Canada 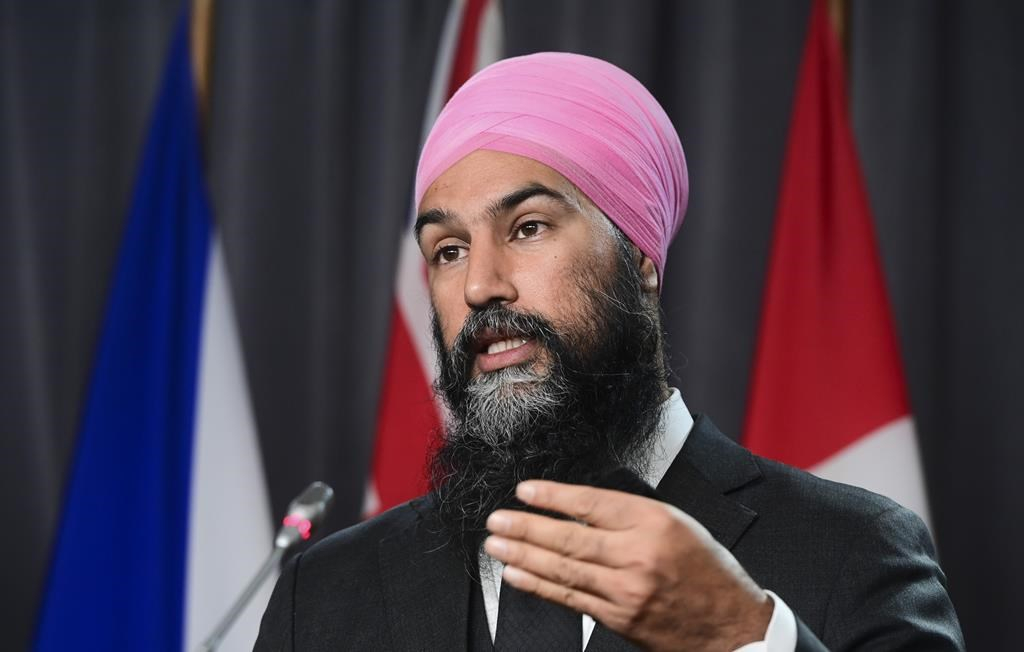 NDP Leader Jagmeet Singh and union officials are calling on the federal government to put a stop to its role in for-profit long-term care homes, where deadly COVID-19 outbreaks are worsening as the second wave of the pandemic takes hold.

Singh and two unions say the government must transform Revera from a for-profit corporation into a publicly managed entity.

The company runs more than 500 seniors' residences in Canada, the United States and the United Kingdom. It is owned by a federal Crown corporation that manages public-service pensions, which bought it out in 2007.

Revera confirms that 93 residents have tested positive for the novel coronavirus and 32 have died in an outbreak at just one Toronto facility over the past seven weeks, one of two dozen Revera homes where outbreaks have occurred.

"These are grandparents. These are our loved ones. And they are being lost in completely preventable scenarios," Singh said Thursday at an emotional rally on Parliament Hill alongside families of nursing-home residents who died this year.

"We are losing people we care for because profits are taking priority over people," he said, calling for-profit residences the site of "the worst conditions."

Chris Aylward, president of the 200,000-member Public Service Alliance of Canada, dubbed the treatment of residents in private seniors' homes a "national crisis" that is "absolutely shameful."

He is asking the government to initiate discussions between the Public Sector Pension Investment Board (PSP), the Crown corporation that owns Revera, and provincial health authorities to transition the company into a publicly owned and managed network of nursing homes.

A study published in the Canadian Medical Association Journal in August found that for-profit homes in Ontario were likelier to see more extensive COVID-19 outbreaks and more deaths, though the odds of an outbreak in the first place were no greater than at non-profit residences.

The rate of death was 29 per cent higher at for-profit homes than at non-profit ones at 23.4 per thousand, according to the study.

The results cited older design standards — including fewer single-occupancy rooms — and "chain ownership" as key reasons for the disparate outcomes.

Prime Minister Justin Trudeau said Thursday he "respect(s) provincial jurisdiction." At the same time, "we will be there as a federal government" to help protect our seniors' rights, he said, citing billions of dollars in extra support funds transferred to the provinces.

Ottawa asked the Canadian Red Cross to send workers into some care homes in Ontario facing outbreaks last month, after sending in the military to help out in homes in Quebec and Ontario last spring, Trudeau noted.

Health Canada spokeswoman Maryse Durette said questions about whether the Liberal government would consider trying to end Revera's for-profit model should be directed to the provinces, given their constitutional jurisdiction over health care.

Asked about its handling of nursing-home outbreaks, the press secretary for Ontario's long-term care minister said it needs more funding from Ottawa to address systemic issues after the province invested more than $500 million in long-term care supports.

"As we confront the second wave, we must continue to implement the lessons learned from Wave 1," said Krystle Caputo.

The success of that implementation is now in question.

Ontario reported 100 active outbreaks at long-term care homes and 619 cases among residents on Thursday, as well as 529 cases among staff.

Out of 7,857 total cases among long-term care residents in Ontario, 2,115 have died — about 61 per cent of COVID-19-related deaths in the province.

“These stories just continue to break my heart and turn my stomach,” said Sharleen Stewart, who represents more than 60,000 workers in Ontario as president of the SEIU Healthcare union.

“This is the second wave. We know what happened, we’ve seen it."

Stewart, who spoke to reporters virtually after a rally where 2,000 pairs of empty shoes dotted the Hill’s main lawn to symbolize those who died, said long-term care homes like Revera's should be run like hospitals to make them accountable to residents.

Revera is effectively a real estate corporation "masquerading as a resident-care company," she said, with a business model beneficial to investors but not seniors.

Perennial problems include low staffing levels, substandard wages and benefits and, amid the pandemic, a dearth of personal protective equipment, she said.

Revera says it developed a "comprehensive pandemic playbook" to keep COVID-19 off its properties and contain the illness when it gets in, with regular surveillance testing of staff to identify positive cases.

"Unfortunately, and tragically, in a handful of our homes, the virus has spread via asymptomatic spread and has only been detected after many staff and residents have been infected and developed symptoms," spokesman Larry Roberts said in an email.

Workers live in the community and residents travel to and from local hospitals for treatment, which puts long-term care homes at greater risk, he said.

PSP, the federally owned pension fund manager that owns Revera, said the safety and well-being of residents and employees are a primary focus.

It notes the 59-year-old firm's board is made up largely of independent directors, "including a former medical professional," and that its confidence in management and staff is "unwavering."