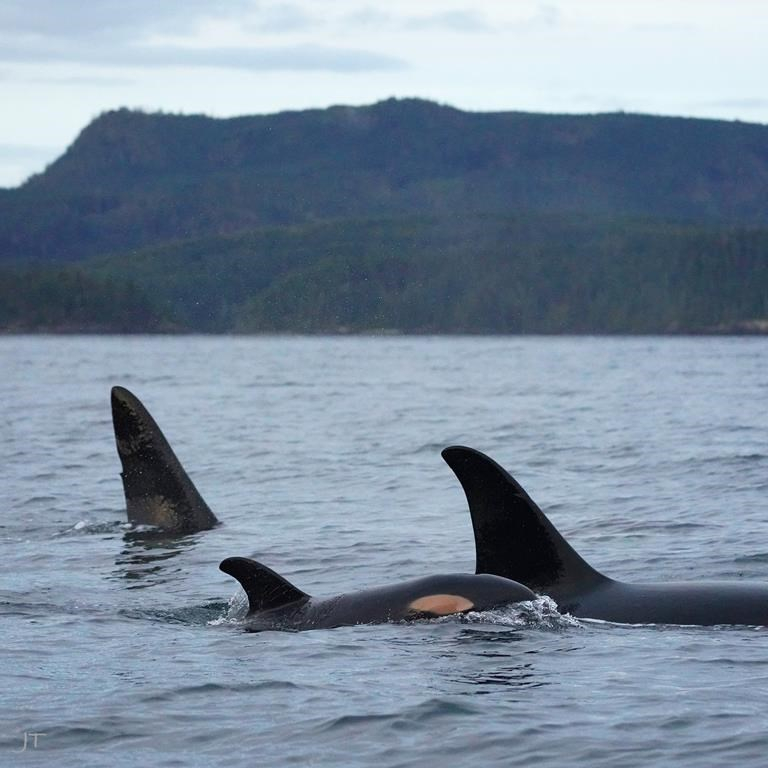 Members of the A5 pod, shown in this recent handout photo by Jared Towers, a scientist with the Department of Fisheries and Oceans, returned this week with a newborn to the Broughton Archipelago. Photo from The Canadian Press
Previous story

ALERT BAY, B.C. — Two northern resident killer whale families brought along a baby as they returned for the first time in 20 years to their traditional winter foraging grounds in British Columbia waters.

Jared Towers, a scientist with the Fisheries Department, said he spotted the group, collectively known as A5, this week in the Broughton Archipelago, where they once fed on chinook salmon before being driven out by deafening acoustic "harassment devices" installed by fish farms.

They were meant to deter sea lions and seals, but the noise also kept orcas out of the territory that they have now reclaimed, Towers said, adding the devices were removed several years ago because of their negative impact on killer whales.

"They just stopped using the area altogether for over two decades and now it's a sign of hope that they're revisiting these territories and perhaps feel safe enough going back into those waters," he said of the group of islands near Alert Bay.

Towers said he saw nine whales, including a calf that appeared to be about a week old, alongside its mother, Midsummer; great-great-aunt Corky; and great-uncle Fife.

"There are at least a couple of individuals who are alive now who were much younger the last time they were documented in that area, so these animals probably remember that when their mom was alive, that's where she took them," he said.

"It's amazing to see them swimming past a little tiny beach in the middle of the strait and all of a sudden they do a 90-degree turn and head right for that beach that's one of the only places on the entire coast where they'll rub their bodies."

Towers said the A5s were heard on a hydrophone in the water and identified by their dialect before he headed out to search for them.

Many of the northern resident orcas, which number about 300 and are classified as threatened in Canada, were shot by fishermen or captured for aquariums in the 1970s, he said.

They typically hang out in the waters of central and northern B.C., but don't spend much time in the Vancouver, Victoria or Seattle areas, unlike southern resident killer whales.

Ernest Alfred, a member of the Namgis First Nation based in Alert Bay, said the return of the northern residents is a sign that salmon stocks are rebounding.

"This is a place where we used to have a herring fishery and a salmon fishery," said Alfred, adding he occupied a fish farm for 284 days starting in the summer of 2017 as part of a protest against the industry.

He said acoustic devices piped in loud acoustic sounds in the area between about 1993 and 1999, "effectively blasting the A5 pod out of its home territory."

The B.C. government and three First Nations announced an agreement in December 2018 to transition 17 fish farms operated by two companies out of the Broughton Archipelago by 2023.

Orcas are actually dolphin species.....& are not whale species.

Actually, for those unaware,

Actually, for those unaware, Killer whales are actually not whales at all, but the largest of the dolphin species. Though they are still referred to as Orca, or Killer Whales by many.

And were originally called "whale killer," because as the fiercest as predators, they take down larger whales.

Excerpt: The tendency to take on other whales is where their terrifying name comes from. Long ago, sailors referred to these massive creatures as "whale killers." Eventually that nickname changed to killer whale.

And then of course, what Orca really are.

Excerpt: Orcas, or killer whales, are the largest of the dolphins and one of the world's most powerful predators.

I hope this lends some light, on these magnificent, intelligent creatures, that are all about family.

We need to save them. They're swimming hungry.