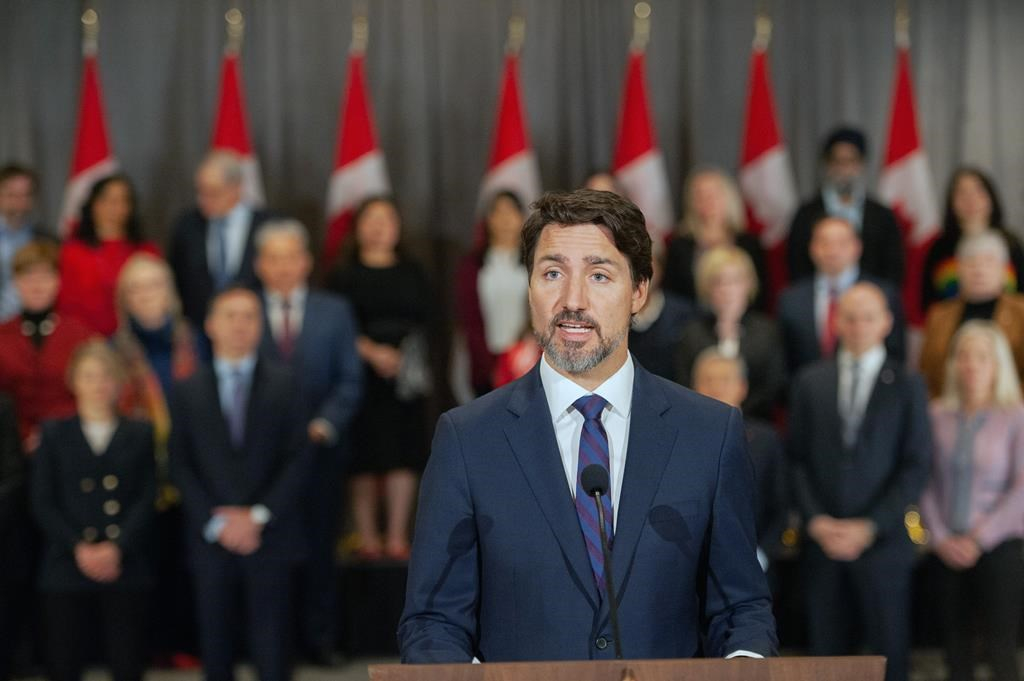 OTTAWA — Prime Minister Justin Trudeau has conducted a small shuffle of his ministers before holing up later in the day for a cabinet retreat to plot strategy for the resumption of Parliament.

The shuffle is due to the departure of Navdeep Bains, who stepped down as innovation minister Tuesday and is not intending to run again in the next election.

Toronto−area MP Omar Alghabra took over the Transport portfolio, which has seen 10 months of turbulence since the pandemic prompted a travel industry collapse and controversy over refunds for flight cancellations.

Jim Carr also returned to cabinet as minister without portfolio and special representative to the Prairies.

The former minister for international trade diversification stepped down after announcing his diagnosis with multiple myeloma, a blood cancer, in October 2019.

In a video message posted Tuesday morning, Bains said that after six elections, he wants to spend more time with his family.

"They have sacrificed so much over the last 17 years. This last year has been hard on families," says the MP from Mississauga, Ont. "My daughters, who are in Grade 5 and Grade 8, have needed me more in the last year and I’ve needed them, too. It’s time for me to put my family first, and I couldn’t be happier about it."

Trudeau has been clear that he wants departments crucial to the country’s economic recovery from the COVID−19 pandemic to be overseen by ministers who will be around to help sell the government’s agenda during the next election campaign.

The shuffle, which played out online in a streamlined ceremony stripped of pomp and ritual overseen by Gov. Gen. Julie Payette, follows a smaller round of musical chairs triggered by the resignation of then−finance minister Bill Morneau in August. Chrystia Freeland replaced Morneau while keeping her role as deputy prime minister.

The cabinet retreat — four one−day sessions to take place over the next two weeks — is to focus on what more the government needs to do to manage the pandemic, which continues to rage across the country, including ways to accelerate the rollout of vaccines.

It is also supposed to focus on the eventual economic recovery and the Liberal government’s plans to invest billions in the fight against climate change, job creation, affordable housing, skills training and a national child−care program.

The retreat is taking place as the government prepares for the resumption of Parliament on Jan. 25, in what is bound to be a more aggressively partisan environment.

The pandemic forced a measure of cross−party co−operation last year, which allowed Trudeau’s minority Liberal government to operate without any serious threat to its survival.

But the spirit of collaboration was badly strained by the end of last year and is likely to evaporate altogether this year, particularly once the the government introduces a budget expected to send the already−historic federal deficit into the stratosphere.

The government will need the support of at least one of the main opposition parties to survive a confidence vote on the budget.

Trudeau began holding periodic cabinet retreats six years ago, billing them as a way to encourage bonding among ministers while getting outside the Ottawa bubble.

COVID−19 put an end to the regional outreach aspect of cabinet retreats last September. Trudeau and his ministers confined themselves to a few days holed up in a government building in the nation’s capital to ponder how to get the country through what was then just the start of the second wave.

And now the pandemic is putting an end to the bonding aspect of retreats as well.

Trudeau will be hosting a retreat that will be entirely virtual, with ministers participating via videoconference from separate locations around the country.

Shuffle, shuffle. Trudeau cannot seem to find or retain the best and brightest of the available Liberal MP stable. I get the sense that many of the people who graced his cabinet in the beginning have lost the fire, the spark his new government promised after the dismal performance of the hidebound, tightly corseted regime of the ideologically rigid Harper. The only gratitude I have is that Harper and his misanthropic/misogynist party were not in charge of the Pandemic response. No doubt we would be in the same pickle as the U.S. were he still in charge.