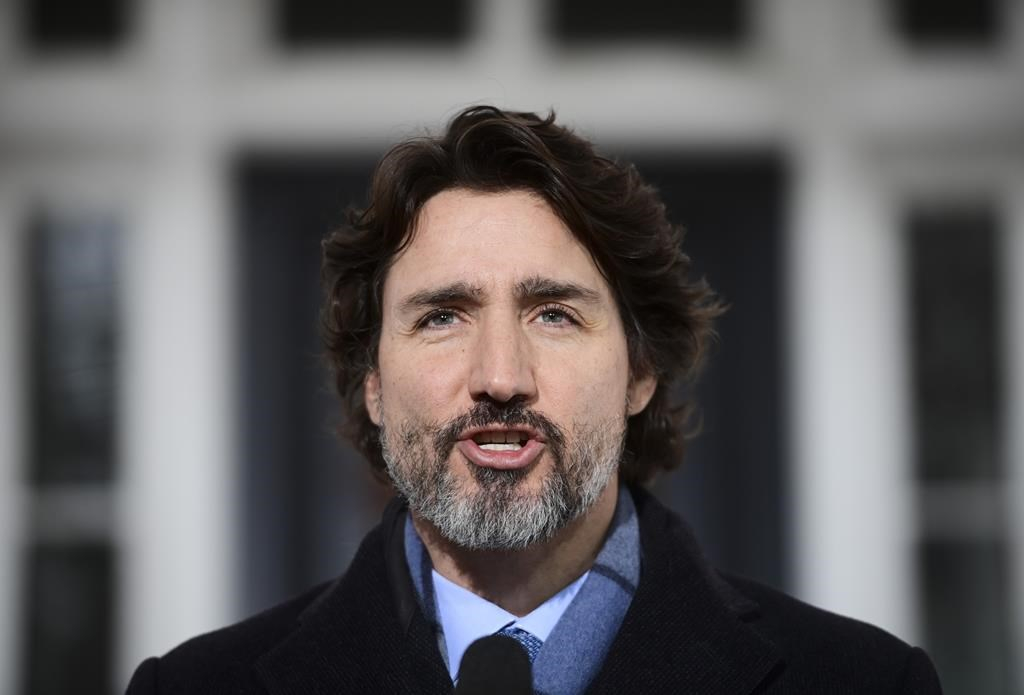 Prime Minister Justin Trudeau provides an update on the COVID-19 pandemic from Rideau Cottage in Ottawa on Tuesday, Jan. 11, 2021. File photo by The Canadian Press/Sean Kilpatrick
Previous story
Next story

Trudeau shrugged off media reports that Biden intends to revoke the cross-border project's presidential permit as early as Wednesday, the day he takes the oath of office and moves into the White House.

But even the prime minister's full-throated defence of the controversial US$8-billion effort to ferry Alberta bitumen to U.S. refineries betrayed a note of resignation, focused less on what he intended to do than what he'd done already.

He'd been singing the praises of Keystone XL for more than seven years, Trudeau said, including in a congratulatory phone call with Biden in the days immediately after his election win in November.

He said it would be Kirsten Hillman, Canada's envoy in Washington, who would be making Ottawa's case with what he described as the "highest levels" of the Biden team.

And he acknowledged the elephant in the room: that Biden's campaign team promised back in May that it would do precisely what transition documents reviewed by The Canadian Press suggest will happen Wednesday.

"We understand, of course, that it is a commitment that … the candidate Joe Biden made to cancel this pipeline," Trudeau said.

"At the same time, we continue to demonstrate the leadership that Canada has shown on fighting climate change and on ensuring energy security as a priority for North America."

Advocates for the project, however, are clinging to hope that the ensuing outcry — the Alberta government is already threatening legal action — will prompt the Biden team to give them a chance to change the president-elect's mind.

Canada has known ever since May "that we would have to work very hard to make our case for this project," Hillman said in an interview Tuesday when asked about reports of the project's imminent demise.

#Trudeau vows to keep up the fight to sway #US on merits of #KeystoneXL pipeline. #KXL #abpoli #CdnPoli

"I actually see it as something that has been ongoing for a long time. And I'll be honest, it's still ongoing," she said.

"We're continuing to have these conversations, regardless of what is out there in the press, and we are still having conversations with people within the Biden team about this, even today."

A readout out from the prime minister's office says Trudeau told Kenney that Canada has made the case for the project, including recently to president-elect Biden.

The Prime Minister said that workers in Alberta and across Canada will always have the government’s support.

"The Prime Minister looked forward to working with the incoming administration of president-elect Biden to fight climate change, protect jobs and grow the economy."

Kenney issued his own statement, saying he thanked the Prime Minister for his government’s continued support for the project.

He said he urged the federal government to do everything possible to convey a clear message to president-elect Biden that rescinding the Keystone XL border crossing permit would damage the Canada-US bilateral relationship.

The public relations campaign also continued Tuesday as a D.C.-based strategic communications firm hired by the Alberta government released details of a recent poll aimed at gauging public attitudes toward Keystone XL in the U.S.

The online poll by JDA Frontline Partners was conducted among 1,400 respondents over a 10-day period that ended Monday. It suggests nearly half of those surveyed supported the project, while 24 per cent opposed it and 25 per cent said they didn't know.

The poll also suggests that compared to high-priority issues like the COVID-19 pandemic and the state of the U.S. economy, the question of Keystone XL's potential effect on climate change did not rank very high.

"Voters don't think it's an urgent thing," said pollster Matt George. "And in terms of potential impact, voters don't think that rescinding that permit will have a major impact on addressing climate change."

Indeed, when informed construction on the pipeline had already begun and crossed into the U.S., nearly three-quarters of respondents — 71 per cent — said it should be completed.

Online surveys cannot be assigned a margin of error because they do not randomly sample the population.

The politically fraught project, originally proposed in 2008, aims to deliver more than 800,000 additional barrels a day of diluted bitumen from the Alberta oilsands to refineries along the U.S. Gulf Coast.

It has long been a linchpin in Canada's strategy for boosting fossil-fuel exports by delivering Alberta's landlocked underground energy resources to tidewater.

At the same time, it has become a lightning rod for partisan and public discord in both countries as debate continues to escalate over climate change, economic growth and society's long-standing dependence on fossil fuels.

As a result, it never found favour among the Democrats in Barack Obama's White House, which included Biden as vice-president. That administration slow-walked the approval process for the better part of eight years, much to the frustration of then-prime minister Stephen Harper, before outright rejecting it in 2015.

"When that dinner took place, there was lots of talk of bromance in the air, and lots of smiles all around, but very little discussion about the decision to abort the decision on Keystone XL," Chong said in an interview.

"I think the present decision is just a continuation of what happened in November of 2015."

Canada's pitch to the Biden team has for months framed Keystone XL as a vastly different, more environmentally friendly project than the original. And TC Energy Corp. plans to spend US$1.7 billion on a solar, wind and battery-powered operating system for the pipeline to ensure it achieves net-zero emissions by 2030.

It has also included the idea of talking about energy exports and climate change as part of a shared North American strategy, a proposal federal Environment Minister Jonathan Wilkinson repeated during an online panel discussion Tuesday.

"Canadian energy opportunities with the United States are bigger than any one project," Wilkinson said.

"It's important, not just for Canada but for the United States as well, to be thinking about how the continued use of fossil fuels in combustion fits in the context of a broader climate plan."

As for the question of whether an early Keystone XL decision by the Biden White House would put the Canada-U. S. relationship on an awkward footing, Hillman sounded unconcerned.

Trudeau: "we continue to

Trudeau: "we continue to demonstrate the leadership that Canada has shown on fighting climate change"
Where? When? What?
Under climate leader Trudeau, Canada's GHG emissions in 2018 hit levels not seen in a decade. Not on track to meet 2030 and 2050 targets.
Oilsands expansion enabled by new export pipelines will prevent Canada from meeting its inadequate targets for decades.
Canada does not even report its emissions accurately. As multiple studies based on actual measurements show, Canada's oil & gas industry grossly under-reports its emissions — of all types. The industry's emission stats are fiction. Grossly under-reported oilsands emissions do nothing but climb year after year. AB's emissions show no sign of falling.
On climate, Trudeau is full of hot air.

Federal Environment Minister Jonathan Wilkinson: "It's important, not just for Canada but for the United States as well, to be thinking about how the continued use of fossil fuels in combustion fits in the context of a broader climate plan."
The science is clear. The 2018 IPCC Special Report on Global Warming of 1.5°C warns that the world must nearly halve GHG emissions by 2030 and eliminate them by 2050 to keep warming below the danger limit of 1.5 C. We are on track for 3 C rise by 2100.
Doubling down on fossil fuels in the face of climate change is insane.
Trudeau, Kenney, Notley, Horgan, and the oil & gas industry have no viable climate plan to meet Canada's targets. Mired in denial, they are determined to fail.

Every piece of new fossil infrastructure like pipelines locks us into a fossil fuel future. Making it harder to change course. More profitable fossil fuels means fossil fuels for longer.

I smell the scent of an

I smell the scent of an election in the air.