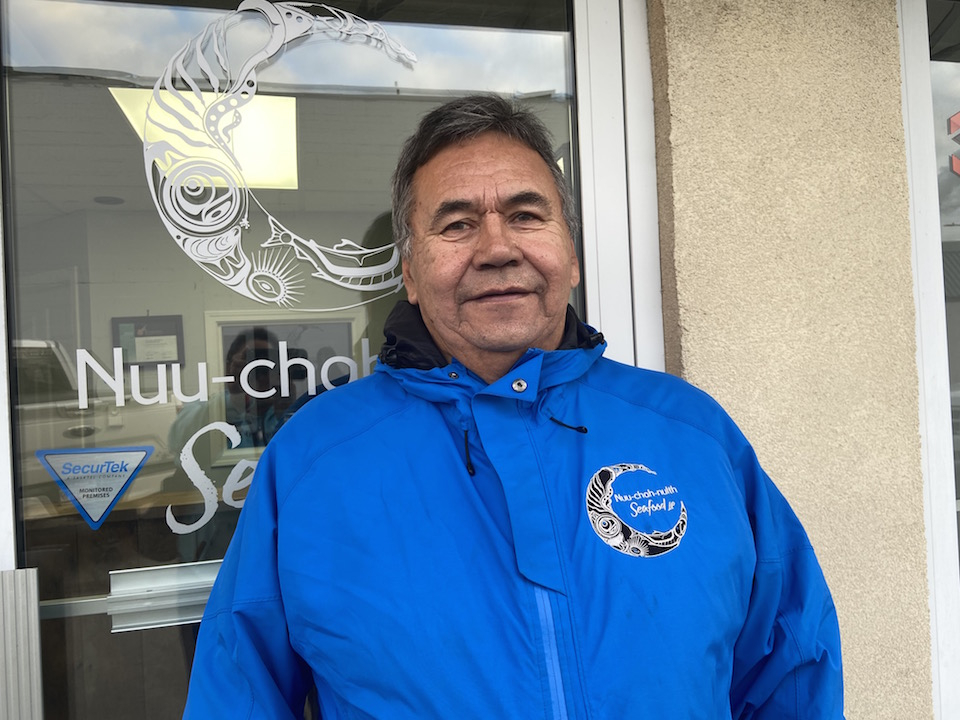 Larry Johnson takes the responsibility of his traditional name — Anii-tsa-chist, or Keeper of the Sea — bestowed to him three decades ago by a much-respected uncle very seriously.

“I’m very proud of the name,” said Johnson, the president of Nuu-chah-nulth (NCN) Seafood, and a fisherman descended from generations of fishermen.

“It is an honour to hold it and to try to live up to that name, and that's what I try to do every day,” he said.

It’s why Johnson is so excited by the prospects of seaweed aquaculture, one of the newest ventures NCN Seafood has undertaken in partnership with Cascadia Seaweed.

The First Nation owned enterprise had already been exploring opportunities around the commercial cultivation of seaweed though research projects with North Island College (NIC) when the newly formed aquaculture company, Cascadia, reached out, Johnson said.

Shared goals of providing economic diversification, employment opportunities and skills training for coastal First Nations communities make for a good partnership, he added. The two companies' operations on the west coast of Vancouver Island are expected to yield approximately 80 tonnes of seaweed this spring.

However, true to his name, Johnson thinks seaweed farming is ideal because it’s rooted in First Nations tradition and commitment to the sustainable use of resources.

“We knew exactly where we belonged and our role within this environment,” he said.

“It was to maintain a balance of nature and resources so that the resources and Mother Earth would be there for seven generations.”

#Seaweed cultivation could be the next big thing in B.C. — and coastal First Nations are banking on the sustainable product.

Cultivating seaweed, a nutritional plant-based food, requires no land, freshwater or fertilizer. It absorbs its nutrients from water alone and provides variety of ecosystem services such as carbon capture and marine habitat regeneration, noted Johnson.

“It ticks off a lot of the boxes,” Johnson said, adding he believes seaweed farming is going to be a growth industry in B.C.

“It’s a sector perfectly suited to First Nations up and down the coast.”

The Klahoose First Nation, based on Cortes Island northeast of Vancouver Island, is another coastal community ahead of the curve when it comes to cultivating seaweed.

“We're so excited about it,” said Muskee, adding kelp has been seeded adjacent to the Klahoose’s geoduck nursery in Squirrel Cove and alongside a mussel operation in Gorge Harbour.

Beyond the fact the seaweed might protect shellfish from increasingly acidic ocean due to warming waters, the fast-growing algae provides income and harvest opportunities while waiting for longer growing shellfish to mature, he said.

Kelp typically has about a six-month winter growing season while geoducks take seven years to grow to maturity.

“Geoducks are a longer-term game, so it would be just amazing to be able to grow kelp overtop of (them),” Muskee said.

If the initial seaweed cultivation projects perform well, the Klahoose hope to apply to the province to add seaweed licences to three other deep-water geoduck tenures, he said.

However the regulatory process is unwieldy and time-consuming, even with an existing shellfish tenure in place, Muskee said.

“It took eight months just to get kelp added as an accepted species,” he said.

Other First Nations applying from scratch for aquaculture tenure as well would likely face a much longer timeline, he added.

“I believe the biggest challenge for this industry is going to be getting enough tenures permitted in the next year,” Muskee said.

“We feel like (the regulatory process) is probably understaffed.”

But if they can get all their kelp licences online, the Klahoose hope to become a centre of regional production with the attendant sustainable jobs, Muskee said.

“We want to produce enough so we could become a hub and, maybe in the future, attract Cascadia to set up a nursery here or a processing facility,” Muskee said.

The Kwiakah Nation’s first priority is exploring kelp cultivation as a means to support its conservation goal of regenerating seaweed forests that have diminished in its traditional waters in the Phillips and Frederick Arm region on B.C.’s isolated central coast, Voelker said.

“The principle of seaweed farming is intriguing,” Voelker said, adding the sustainable and regenerative aspects of the sector are appealing.

But it’s early days in the industry, and the Kwiakah want to ensure cultivating seaweed on a widespread commercial basis won’t have unintended consequences or pose environmental risks typically associated with industrial farming, he added.

“If it really is as benign as it looks like right now, that would be fantastic,” Voelker said.

However, there are logistical and economic factors that play into cultivating seaweed, he added.

Seaweed farming might not make sense for every coastal First Nation, he said.

Remote coastal First Nations may not be close enough to processing facilities to make the transport of a fragile, perishable product economically viable, he added, noting Kwiakah traditional territories are 70 kilometres away by water from the nearest port of Campbell River.

But it’s worth exploring what processing could be done in a remote community for seaweed products, even if not destined for the more rigorously regulated food market, Voelker said.

“But does it make sense that every individual band creates their own products, and having their own processing facilities?” he asked. “I don't think so.”

Plus, First Nations communities would have to find enough capital to start up and maintain the infrastructure, he said.

“I'm cautiously optimistic that there is a business case for seaweed farming,” Voelker said, adding he’s not suggesting those already involved in the sector have jumped the gun.

The Kwiakah are simply doing more research to answer questions around seaweed cultivation based on their individual circumstances and location, he said.

“We're just exploring whether there are ways to do it that are economically feasible.”

This is awesome -- keep it

This is awesome -- keep it coming Rochelle. Any downsides? How does the seaweed protect the shellfish from acidification?

I very strongly share the Kwiakah Frist Nation's concern "to ensure cultivating seaweed on a widespread commercial basis won’t have unintended consequences or pose environmental risks typically associated with industrial farming." -- I hope the impacts on other species will be considered and carefully monitored, and that funds invested (or jobs created) won't be used as an excuse to continue the practice if it appears to be causing problems with other populations of the coastal ecosystem.