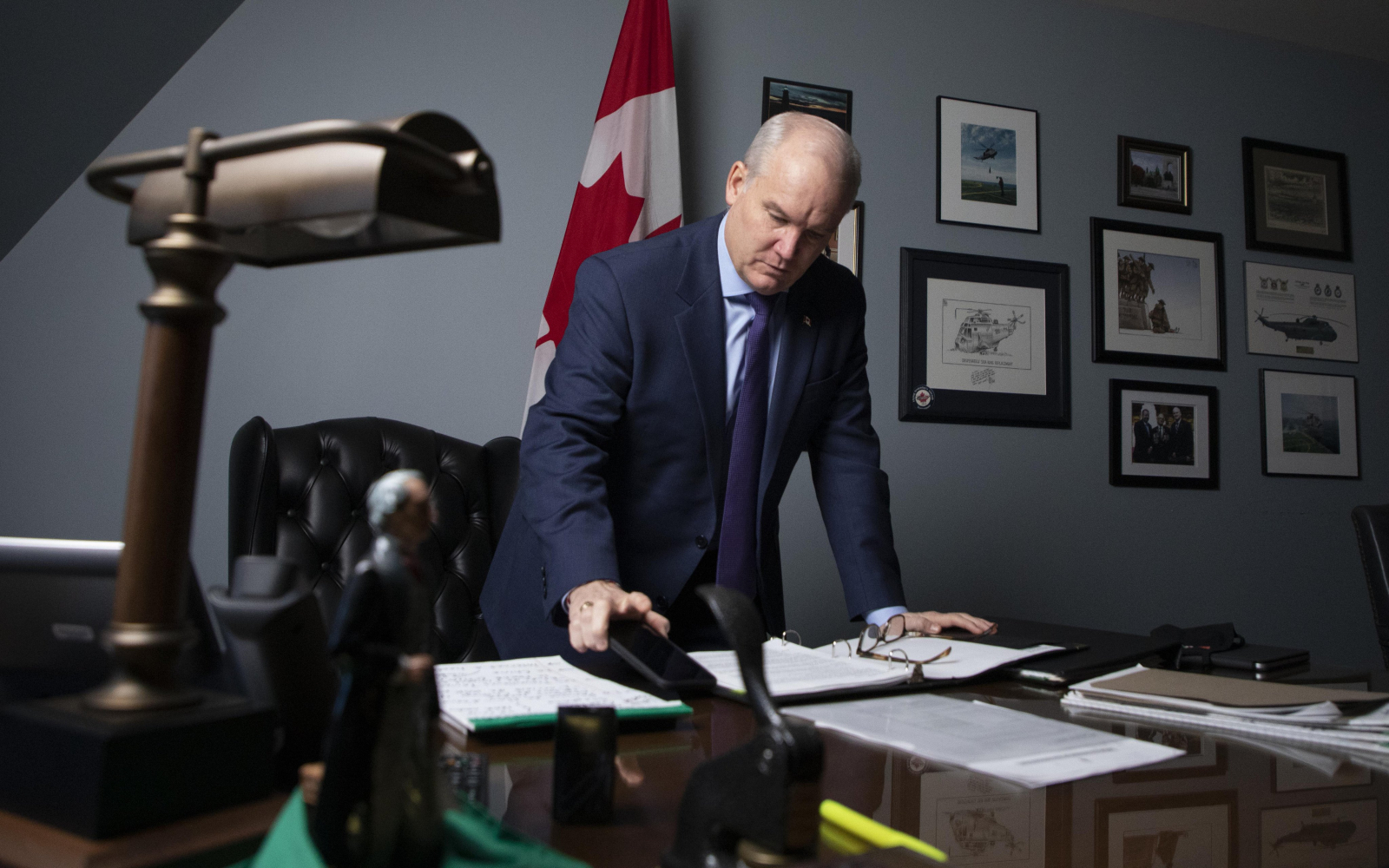 Lawmakers from Canada’s federal opposition Conservative Party have embarked on a campaign to place a legal and environmental dispute in Michigan over the Line 5 oil pipeline at the feet of Prime Minister Justin Trudeau.

Several Conservative MPs have been sharing an image on social media that warns of an impending “Liberal pipeline failure” if the Line 5 pipeline, running through the environmentally sensitive Straits of Mackinac, is shut down — a decision that was taken months ago by Michigan Gov. Gretchen Whitmer, and that Enbridge is currently challenging in U.S. federal court.

This is yet another decision by the US government that will harm Canadians.

A Conservative government would stand up for our Canadian oil and gas! pic.twitter.com/gg9NZzTmxD

The Calgary-based energy company is seeking an injunction to stop the state from revoking the pipeline’s 1953 easement, which Whitmer said she did after the company “refused to take action” to protect the Great Lakes, and “repeatedly violated” the terms of the easement by “ignoring structural problems” with its aging, dented pipeline.

While this legal drama is playing out, Conservatives are also urging their followers to sign a petition that calls on Trudeau to “appeal” to U.S. President Joe Biden to “intervene” in the pipeline dispute in order to “prevent” Whitmer from following through with her decision.

Conservative Party Leader Erin O'Toole also wrote an op-ed in the National Post accusing the Liberals of being “silent” on the matter and suggesting the pipeline was not a “priority” for the prime minister. On Thursday, his party called for a special House of Commons committee that would address Line 5, among other Canada-U.S. issues.

Trudeau, however, has said in Parliament that the federal government and Canada’s ambassador in Washington have been advocating for Line 5 to U.S. officials. Transport Minister Omar Alghabra also revealed Feb. 3 he has spoken with U.S. Transport Secretary Pete Buttigieg about the pipeline.

A productive first call with my new counterpart from the 🇺🇸 @PeteButtigieg. We continue to collaborate closely on our strong commitment to reducing GHG in the transportation sector. We discussed Line 5 and our shared priorities, notably on transportation safety. pic.twitter.com/No5uSOlBWl

“Line 5 is a vital source of fuel for homes and businesses on both sides of the border,” said Trudeau on Feb. 3.

Conservatives have embarked on a campaign to place the legal and environmental dispute over the #Line5 pipeline at the feet of Prime Minister Justin Trudeau. #cdnpoli

“That is something we have argued strongly, and will continue to argue strongly, with members of the U.S. administration. Our ongoing engagement with the Biden administration and with partners in the United States on this and many issues continues to be on the front burner.”

Whitmer said she was ending the easement because Enbridge was imposing an “unacceptable risk of a catastrophic oil spill” in the Great Lakes. The pipeline lies exposed at the bottom of a “busy shipping channel” in the straits, she said, “vulnerable to anchor strikes, similar dangerous impacts, and the inherent risks of pipeline operations.”

A 2018 study by Michigan Tech’s Great Lakes Research Center said a worst-case oil spill would affect over 643 kilometres of shoreline, releasing up to 58,000 barrels of crude oil into the Great Lakes and putting dozens of species and thousands of acres at risk. A 2016 University of Michigan study showed a majority of open water on Lake Huron and 15 per cent of open water in Lake Michigan could be affected.

Critics also point to a history of actions by Enbridge to fortify the dual pipes that run along the bottom of the straits, including using anchor supports to hold the pipes in place. They note incidents that the pipes have faced, like being dented by an anchor in 2018, and argue the 67-year-old pipeline has outlived its lifespan.

Ask @JoeBiden to support #shutdownline5. We need 1000's of signatures. Enbridge is already asking the Canadian government to help keep it operating. STAND UP for the Great Lakes and climate!

Green Party Leader Annamie Paul said she had no reason to doubt the results of the research that informed Whitmer’s decision.

“We know that the line is very old, we know it has begun to deteriorate, we know that it’s dented in places, we know it would be catastrophic if there was a major oil spill with that line, so I am sure she has taken all of that into account,” Paul said.

Enbridge has insisted that the worst-case oil spill scenario is “extraordinarily unlikely to happen” and has touted its safety measures, including regular inspections of the pipeline and 24-hour monitoring of the straits crossing.

The company is also moving forward with building what it considers a “safer” tunnel under the straits to house the pipeline.

“The Great Lakes Tunnel will encase a replacement section of Line 5 well below the lakebed, eliminating the risk of an anchor strike and virtually eliminating the potential of any (oil) release from Line 5 into the straits,” said Enbridge spokesperson Ryan Duffy.

There has not yet been a court date set for the case, Duffy said Feb. 2. “We would prefer to meet and come to a resolution, and we continue to offer to meet with the state to resolve any differences,” he said.

O’Toole declined to answer questions for this story through his director of communications.

Paul said Canada was at a crossroads in many respects, and needs to be planning for a green recovery. She said she hoped the Conservatives and all other parties join the Greens in preparing for a sustainable future that “leaves no one behind.”

“In that we join the United States and its new president, President Biden, and his commitment to moving towards a green recovery. We join the 27 countries of the European Union, and many of our international peers who have decided that the future is green, the future is in clean tech and renewables, and the investments we should be making are investments in those sectors — rather than in sectors that are in an irreversible decline,” she said.

“That is something we do on behalf of people in Canada, and in particular, those workers out in the oilpatch, and in provinces that are particularly impacted by the decline in that sector.”

Line 5 carries Western Canadian oil to Ontario, where it supplies refineries that produce gasoline and other fossil fuels, and feeds another pipeline that heads to Quebec.

Conservatives are warning of “fuel shortages,” “higher fuel prices” and job losses linked to the industry if Line 5 closes; “6,500 good-paying jobs in Sarnia, Ontario are on the line,” O’Toole wrote in his op-ed.

It is unclear to what extent this will materialize. Sarnia Mayor Mike Bradley has suggested the number of potential job losses in his city would be closer to 3,000, but he has also said he can’t estimate how many jobs would actually be lost if alternative sources like rail and trucks were used.

That is what Imperial Oil, which runs a Sarnia refinery, is looking at doing, according to a report in the Globe and Mail. The energy company has already laid out plans to obtain crude oil through other pipelines, or by moving it on ships or by rail.

Paul said she understood the implications for Canada, but it was a “false choice” for politicians of any stripe to portray the Line 5 pipeline battle as a choice between jobs and the environment.

Decades ago Alberta Conservatives made a choice of ignoring climate science and took the easy-in-the short-term route of doubling down on resource extraction instead of taking actions to broaden the economic base of the province (country?). That makes the inevitable pain that much greater for Albertans. Sad!

It would be interesting to hear what scientific facts the Conservatives dispute from Michigan's decommissioning findings that were based on unacceptable risk. Why are Canadian Conservatives willing to accept this unacceptable risk? As an Ontarian who is concerned about the risks identified with Line 5, I support Michigan's opposition. Thank goodness our new Green Party leader supports evidence based decision making in the public interest.

Michigan has every right to

Michigan has every right to remove and ban a pipeline that is 70 years old and if it leaks would jeopardize drinking water for millions of citizens. There is likely a way to fix this without it being outright banned and removed but the opposition is still propping up a failing and fading industry. An industry with some spokespeople saying pipelines are not the answer.

It seems clear that Enbridge

It seems clear that Enbridge is crying foul over a situation that is of their own making. This perceived safety issue has been evident already for some decades. Enbridge appear to have first denied/dismissed/minimized the problem, then ignored it, then have been foot-dragging over a effective fix. Now that Michigan has got to the point of being pissed off with their inaction and applied their own solution, Enbridge are claiming blamelessness in "moving forward" with building a tunnel to relocate the pipeline that has been a safety hazard for 67 years.

How is making this a partisan

How is making this a partisan issue even remotely helpful? And WHEN is Enbridge going to build and move the pipeline into a much safer, secure, tunnel environment where flow can be constantly monitored and releases contained?