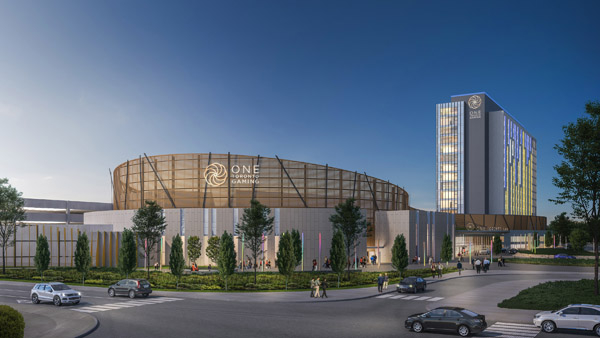 A rendering of the proposed Durham Live development, slated to be built in Pickering, Ont. Part of the development would involve paving over a protected wetland. Handout photo
Previous story
Next story

Behind the contentious Pickering, Ont., project at the centre of a battle over development in Ontario is a billionaire family keen on building a "mini Las Vegas."

The casino complex called Durham Live is in the spotlight after the Ontario government introduced a bill last week in hopes of changing a law to push it through. The developers, Triple Group, are seeking to build a warehouse connected to the project on top of a protected wetland where construction is normally forbidden.

Before that, Triple Group ⁠— run by the billionaire Greek-Canadian Apostolopoulos family ⁠— was best known for a failed bid to turn the Silverdome arena in Detroit, Mich., into the home of a soccer franchise. The building has since been demolished and the site sold to Amazon.

More recently, the company has come under fire for allowing a historic office tower in downtown Detroit to fall into disrepair, to the point that the city has threatened to file a lawsuit. The Penobscot Building went months without heat this winter, its toilets consistently overflow with excrement, and it lost power for a few days last month, disrupting hearings at a courthouse that has servers there.

In 2015, selling a vision of a sprawling entertainment district for the outer Toronto suburbs, the family said Durham Live was a different kind of endeavour.

“There is huge demand for this type of entertainment in the GTA,” Steve Apostolopoulos, son of the company’s late founder, Andreas, told Canadian Business magazine at the time.

“All of our studies have indicated that it is viable.”

The company has billed Durham Live as a massive entertainment complex and a "mini Las Vegas" near Highway 401 and connected to the GO Train.

The contentious Durham Live project was proposed by a billionaire family keen on building a ‘mini Las Vegas.’ Before that, they were known for a failed bid to turn the Detroit Silverdome arena in Michigan into the home of a soccer franchise. #onpoli

But now, Durham Live is facing increasing levels of backlash. Despite the protected wetland on the site, the Ford government issued a special zoning order ⁠— called a ministerial zoning order (MZO) ⁠— in October to fast-track the project, pointing to its potential economic benefit.

Pickering’s city council signed off, and Triple Group has agreed to try to replace the wetlands elsewhere. But neighbouring Ajax is against the project, regular protests have been held at the site since November, Williams Treaties First Nations have raised concerns that they weren’t consulted, and opposition parties have pledged to revoke Durham Live’s permit if they win the next election.

The Toronto and Region Conservation Authority, which has said the development would cause serious damage to the Lower Duffins Creek wetland complex, said it was giving the project a permit "under duress" after the province ordered it to do so Thursday.

The Apostolopoulos family has donated at least $15,000 to the Progressive Conservatives since 2018, an Observer analysis released last month found.

Triple Group and the province have said the contributions were unrelated to the MZO. The company hasn’t weighed in on the recent backlash to Durham Live.

“This whole thing is an example of what not to do,” Ajax Mayor Shaun Collier previously told the Observer, calling it a “poster child of abuse of a MZO system.”

Casinos, meanwhile, contribute a significant amount to Ontario’s coffers. The Ontario Lottery and Gaming Corporation (OLG), a Crown corporation responsible for gambling in the province, brought in $2.3 billion in revenue the year before COVID-19, a significant portion of which came from casinos.

Nearly all of that revenue is expected to have evaporated due to the pandemic, which has largely closed casinos, the province said in November. OLG is forecast to bring in just $200 million in 2020-21.

Multimillionaire developers seem to have a myopia to nature. We have our fair share in the Kingston area - developers that profess a 'love of nature' but then, without requirement even of an MZO, proceed to destroy it on their private properties.

Developers in general have

Developers in general have myopia on so many levels it is difficult to enumerate them.
No doubt Durham Live (an oxymoron if ever I heard one) was conceived years ago - pre-pandemic. The entire mini las vegas concept is most likely entirely unsustainable in the world we are now facing. Between viruses and climate crises - all bets are off - floating on the winds of change.

Moreover, a property owner who allows sewage to overflow in his historic Chicago building is going to have the devils own job controlling water flow in Durham Live. Building on wetlands is a dicey proposition because, do what you will, water has a way of defeating mere human engineering Expect perennial wet basements and/or multiple sump pumps running 24/7 - or prepare to build on stilts. We really don't know how climate changes will affect our topography.

Of course our current PC government can't see beyond the $$ signs dancing before their eyes. Gaming, Gambling, is another dicey proposition as Trump Atlantic City proves and besides which it is always flirting with criminality, anti-social behaviour, added public security costs, anti-social outcomes The age old adage, (Trump excepted) "The House always Wins", means that the public never does.

Is there an organized way we

Is there an organized way we can pressure the developer, just as we are pressuring MPPs to do the right thing? It's hard to continue down a blatantly wrong path when the world is watching.

When will developers realize that it is in their own best interests to develop sustainably? When will governments? Why is acting in the common good and for future generations so at odds with economic health? The financial cost of this fiasco of a development will FAR outweigh any short-term gains.

I would like to see public officials acting as public servants, acting FOR us and for the future, making decisions that are measured and in accordance with science and sustainability. This is not too much to ask or to expect.

If something isn't sustainable, why, in this age of "100-year storms" coming every couple of years, would you proceed? It makes no sense to me.

So we're supposed to let a

So we're supposed to let a wetland die so that . . . we can have a casino, something which is in itself worse than useless. I'm not seeing a lot of benefit to balance the cost here; we're talking something the country would be better off without even if it weren't imposing any costs on us!