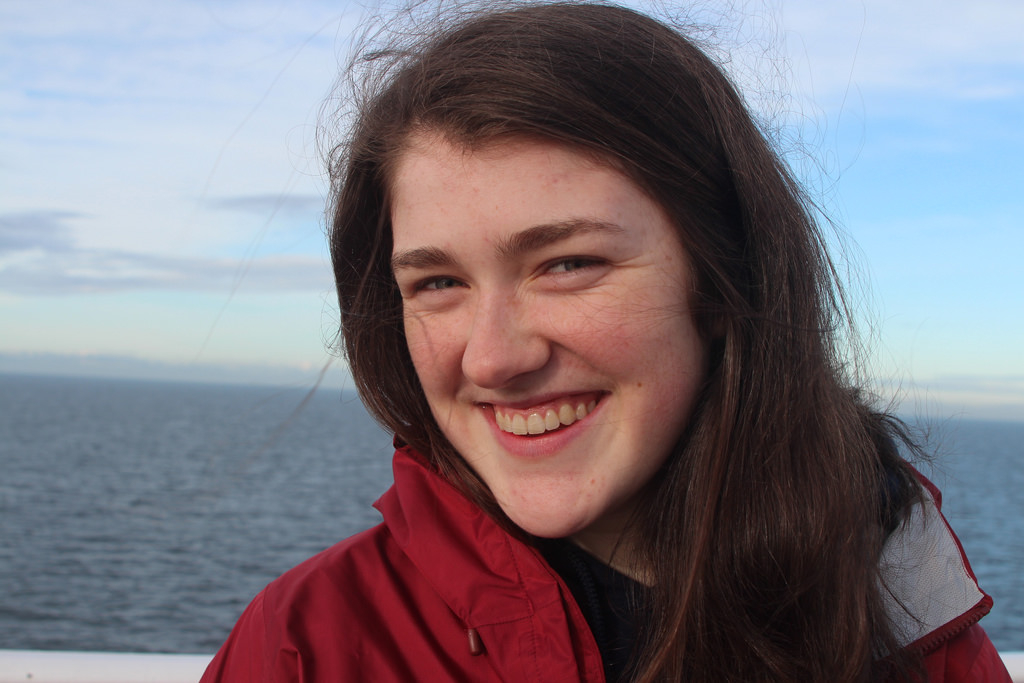 As part of a series highlighting the work of young people in addressing the climate crisis, writer Patricia Lane interviews Mireta Strandberg-Salmon, who led a campaign to ban bottled water sales in her high school.

Bottled water producers will be watching warily to see where 21-year-old Mireta Strandberg-Salmon chooses to do her graduate studies. In 2017, she led her high school, Moscrop Secondary in Burnaby, B.C., to ban vending machine sales of bottled water. In January 2021, her student-led “Ban the Bottle” campaign persuaded Simon Fraser University, where more than 33,000 bottles of water were sold yearly, to follow suit. The university’s decision removed half a tonne of plastic from landfills and reduced carbon dioxide emissions by 2.75 metric tonnes (the equivalent of 1,170 fewer litres of gasoline). Last month, SFU invited her to join its Circular Economy Working Group.

Tell us about your high school campaign.

In Grade 11 social justice studies, we carried out a year-long change-making project. I worked with another student to stop bottled water from being sold in school vending machines. We researched environmental and social impacts, learning that Canadians recycle only nine per cent of plastic, and significant emissions are produced while harming vulnerable communities where the oil and water is extracted. Since bottled water is 2,000 times more expensive than tap water, consumption is also a justice issue. We collected signatures with a petition and consulted with the principal, the school district, parents and gym teachers. The first year, we were not successful. The biggest barrier was long-term vendor contracts with the school.

But I didn’t give up. The next year, the school’s environmental club got those petitions going again, and we stood beside the vending machines talking about the impacts of bottled water. We fished reusable bottles out of the lost and found, sanitized them and refilled them at the drinking fountain to demonstrate a viable alternative. Since we enabled people to feel good and save money, we were popular!

Bottled water sellers beware: This student is coming for you. #ClimateChange #activist #TapWater

The principal responded by renegotiating contracts with vendors. By the time I graduated, Moscrop had banned vending of bottled water. The best news is that other high schools in Burnaby are now following suit.

How did you come to run a similar effort at SFU?

I joked when I graduated high school that my next target would be SFU, but I didn’t really take myself seriously. SFU is spread over three campuses, with many more stakeholders. But after hearing SFU professor and water security expert Dr. Zafar Adeel speak about the impact of bottled water, I was emboldened. If not me, then who?

Tell us about your campaign at SFU.

First, I found others interested in the idea. Then we listened. People with disabilities told us they needed accessible and safe water fountains and reusable bottles. Administrators said they needed students to lead, but also needed a budget to make tap water more available. No one was in favour of keeping bottled water if there were other, less costly, alternatives.

We launched a petition to gauge buy-in and met with decision-makers. Once the administration saw they could reduce climate impacts and increase justice with student support, SFU installed more accessible water fountains and renegotiated vendor contracts.

My mom helps businesses become sustainable. My dad advocates for poverty reduction in the Global South. My stepdad is a retired labour leader, and my stepmom an environmental champion in politics. My grandmothers challenged authority. All of them model thinking of others, listening openly, valuing and voicing my opinions and speaking truth to power. Frankly, not contending with the climate justice crisis never occurred to me.

My social justice teacher created the space for me to grow into a leader and encouraged me to persist in the face of setbacks.

Just because things are the way they are, does not mean they have to stay that way. Find others who think like you. Listen to others' concerns. Be persistent. The work you do today might not pay off immediately, but trust that you are having an impact.

Do you have anything to say to older readers?

Listen to youth voices. Step in when you are needed and then step back. Create space for young people to lead, and keep an open mind when young people challenge the status quo.

Sometimes when I am pushing for change, it feels uncomfortable, and I feel out of place. But I remember the rush of adrenalin and inspiration I got from being one of more than a million Canadians on the streets for climate justice in September 2019. Eliminating bottled water at one university won’t do much on its own, but the ripple effect is huge.

Thank you for this inspiring

Thank you for this inspiring article and thank you Mireta for what you have done and will continue to do.

Bottled water is an evil --