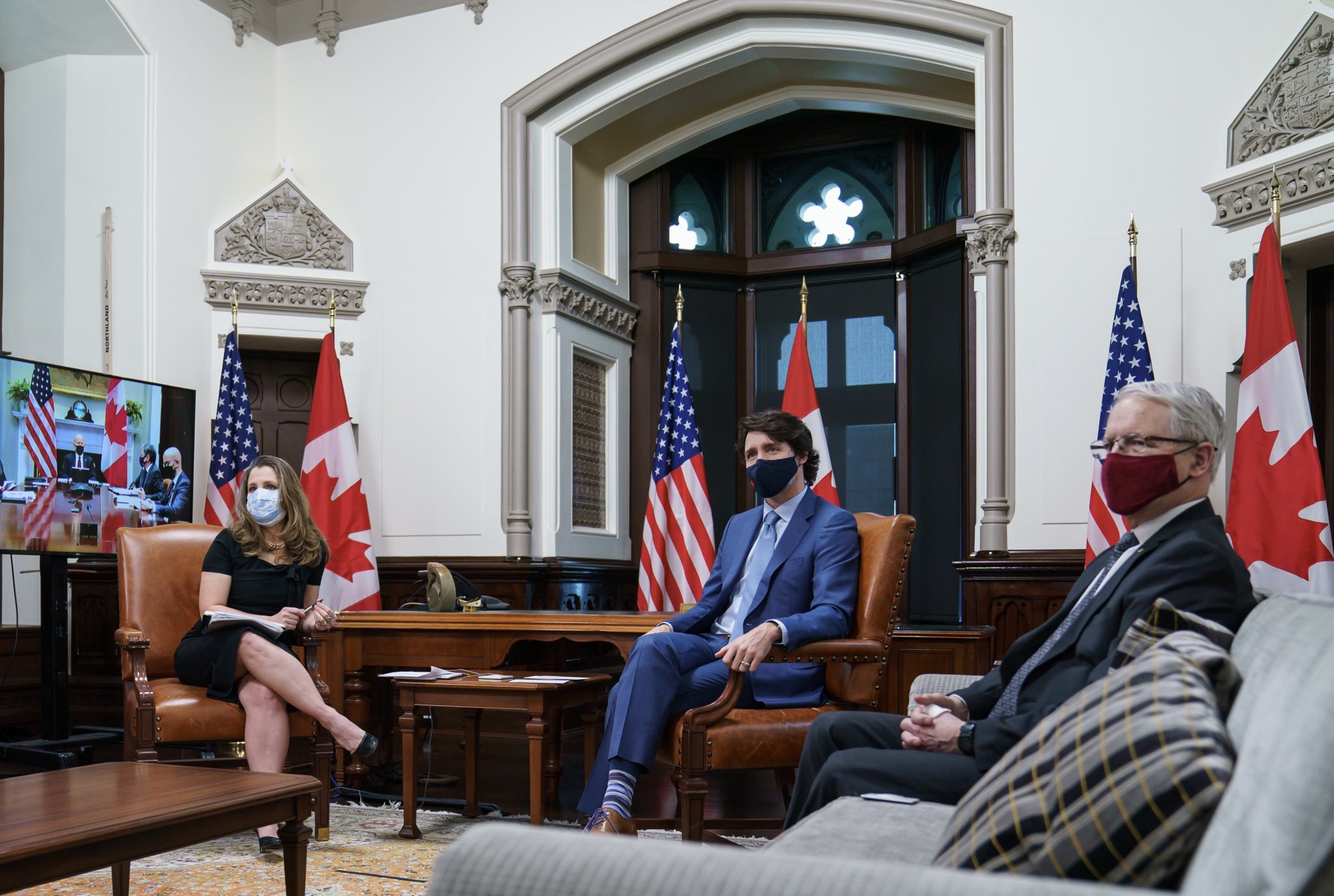 Canada is being outpaced on the international stage when it comes to green investments in electric vehicles and clean energy, environmental groups say.

The federal government has an opportunity to change course in about three weeks, when the Liberals table their first budget in over two years, the International Institute for Sustainable Development (IISD) argued in a new analysis endorsed by nine other climate action, ecology and conservation organizations.

“Canada’s international peers are ramping up commitments for green recovery, including significant investments from many European countries,” states the analysis, “Investing for Tomorrow, Today,” published March 29.

“To keep up with our global peers, sufficient investments and strengthened regulations must work in tandem to rapidly decarbonize all sectors of the Canadian economy.”

Deputy Prime Minister and Finance Minister Chrystia Freeland confirmed last week that the federal budget will be tabled April 19. The Liberals are expected to propose between $70 billion and $100 billion in fiscal stimulus to jolt the economy out of its pandemic doldrums.

The government has also proposed a wide range of green measures in its new climate plan released in December — which the think tank called the “most ambitious” in Canada’s history — including energy retrofit programs, boosting hydrogen and other alternative fuels, and rolling out carbon capture technology.

But the possible “three-year stimulus package to jumpstart our recovery” mentioned in the fall economic statement came with the caveat that the COVID-19 virus would have to be “under control.” While vaccines are being administered, Canada is currently dealing with a rise of highly transmissible variants of the virus.

Freeland spoke with United States Vice-President Kamala Harris on March 25, stressing the “need to support entrepreneurs, small businesses, young people, low-wage and racialized workers, the care economy, and women” in the context of an economic recovery.

U.S. President Joe Biden is contemplating a climate and clean energy recovery plan that could “exceed US$2 trillion,” White House officials told reporters this month. “Per capita, that is over eight times what Canada has announced so far for climate-related spending in the wake of the pandemic,” the IISD-led analysis stated.

Biden is contemplating a climate recovery plan that could exceed US$2 trillion. Per capita, that is over 8 times what Canada has announced so far for climate-related spending in the wake of the pandemic, according to a new analysis from green groups.

Biden’s election platform commitment of $508 billion over 10 years in clean energy was also seen as “significantly higher per capita than Canada’s recent commitments.”

Since October 2020, Canada has announced $36 billion in new climate-focused funding, the groups found. By comparison, they noted, a political agreement in Europe proposed that a minimum of 37 per cent of investments in each national recovery plan should support climate action. France and Germany have also committed tens of billions of dollars to support clean hydrogen.

As for electric vehicles (EVs), the United Kingdom has committed $4.9 billion, while Germany has put up $7.5 billion to expand EV adoption and charging infrastructure and sweeten incentive programs for prospective buyers. The U.K. has also committed $3.5 billion for bike lanes and other active transportation, the groups noted.

Two items stick out on the

Two items stick out on the climate action wishlist: carbon capture and electric vehicles.
Canadians should be wary of these dubious proposals.

EV rebates subsidize the rich. EV rebates are a very expensive and inefficient way to reduce emissions.
While EVs are far more efficient, and infinitely preferable in terms of air pollution, EVs are not a green solution.
EVs have a huge footprint. Car culture drives urban sprawl. Neither is remotely sustainable.
With their huge footprint, EVs wouldn't be green even if they ran on fairy dust. Much of that footprint is embedded in mining and manufacture of materials. About half of the energy used over the lifespan of a car is expended during its production. Using two tons of metal to transport a 150 lb human being is an ecological non-starter.
Canada boasts the worst fuel economy in the world. Why? Because Canadians prefer large vehicles and trucks.
But large EVs have a bigger carbon and ecological footprint than smaller ICE cars.
The larger the range, the bigger the battery, the heavier the vehicle, and the worse for our environment.
Halving our emissions but doubling the number of cars (in developing world) gets us precisely nowhere.
Long commutes in sprawled cities are also hugely inefficient. Sprawl makes efficient public transit impossible. In perpetuating sprawl, EVs exacerbate the problem and delay real solutions.

Cars drive sprawl, and sprawl drives cars. Sprawl forces people to drive everywhere they go. Once people get in that habit, it's hard to break. Obscene energy expenditure. Lost productivity, sedentary lifestyle (and health problems), millions of deaths and injuries, roadkill, and social isolation. Disintegration of community, loss of green space, endless freeways and traffic jams, inefficient public transit, lost productivity, strip mall blight, mega-mall culture, parking lot proliferation, accidents, and property damage. Insanely long commutes in bumper-to-bumper traffic. Sprawl multiplies congestion, energy consumption and waste, time and productivity loss, emissions, and footprint.
In perpetuating sprawl, EVs exacerbate the problem and delay real solutions. A one-Earth footprint cannot accommodate an energy-intensive lifestyle where people drive everywhere they go -- or an urban model relying on millions of cars to transport millions of people.
EVs support the unsustainable urban model underlying our high energy/resource consumption. We cannot solve the paradigm problem simply by replacing internal combustion engines with electric motors.
No solution to sprawl except to hit the brakes. The decisions we make now set the blueprint for generations to come.
We need to redesign our cities for people, not cars. Invest massively in public transit, cycling and pedestrian infrastructure — and smart urban design that allows people to live close to their place of work and amenities.
The automobile lifestyle will never be green. No car is compatible with a one-planet ecological footprint.

Carbon capture and storage (CCS) is a dubious idea to start with. Making taxpayers pay for it makes it worse.
An underperforming white elephant. If CCS were economic, it would not need hundreds of millions of dollars in subsidies.
Unviable without huge subsidies. And a high carbon price, which the fossil fuel industry rejects.
The two projects now online in AB required govt subsidy to the tune of hundreds of millions of dollars to capture a tiny fraction of emissions — and only from large emitters.
The biggest bang for our climate buck? Definitely not CCS. Surely, one of the most expensive and least efficient methods to reduce emissions. Huge opportunity costs.
If CCS is not viable now for large industrial emitters, how much less viable is it for countless small point sources, such as vehicles and buildings? CCS fails to capture emissions at the consumer end, where the bulk of emissions occur. CCS does not address or capture other air pollutants.
CCS is a delay tactic to keep the oil & gas industry on life support for decades.
Huge expense for tiny reduction at taxpayers' expense.

Current emission reductions from the Alberta Carbon Trunk Line are a drop in the bucket. Probably the most expensive way to reduce CO2 emissions.
$1.2 billion to bury 1.8 Mt of CO2 a year. $495 million from AB taxpayers. $63.2 million from Canadian taxpayers. $558 million in tax dollars for a drop in the bucket in emission reductions.
If the AB govt had invested $495 million in public transit, energy efficiency and conservation, building retrofits, and renewables, it could have cut far more than 1.6 Mt.
*
Saskatchewan's Boundary Dam CCS project has sequestered a total of 2 Mt of CO2 since 2014. About half of design estimates.
Carbon capture is not a transformative solution, because it keeps us hooked on fossil fuels. But industry likes CCS (especially for enhanced oil production), as long as govt subsidizes it.
Total scam.
*
Expensive and energy-intensive, CCS simply perpetuates the fossil fuel regime. If the priority is to prop up Canada's oil and gas industry, then by all means. If the goal is to reduce emissions, then those billions of dollars will be far better spent elsewhere.