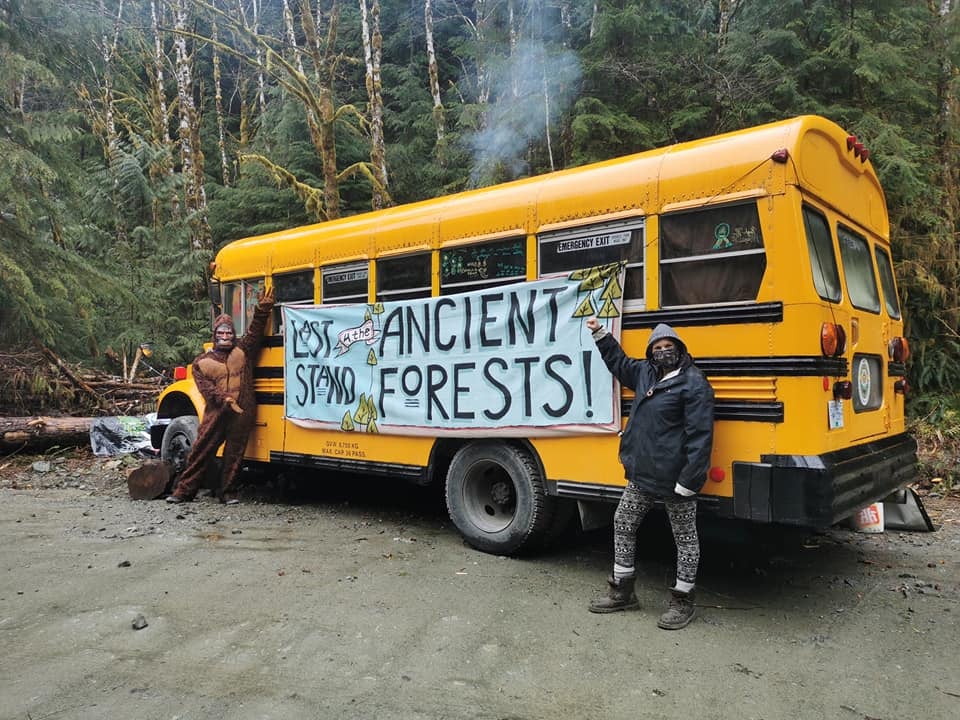 Fairy Creek blockade activists are gathering to consider a statement issued by Pacheedaht Nation chiefs saying activists are unwelcome in their territory. Photo by Glenn Reid
Previous story
Next story

The Pacheedaht First Nation wants Fairy Creek protesters blockading roads in an effort to protect old-growth from logging on southern Vancouver Island to leave their territory.

The First Nation does not welcome unsolicited involvement or interference in their territory, including activism, said a statement from the Pacheedaht released Monday.

“All parties need to respect that it is up to the Pacheedaht people to determine how our forestry resources will be used,” said the letter signed by Chief Jeff Jones and hereditary Chief Frank Queesto Jones.

The Pacheedaht’s constitutional right to make decisions in the territory must be respected, the letter added.

Protesters set up roadblocks last August to prevent logging company Teal-Jones’ access to old-growth areas within Tree Farm Licence (TFL) 46 as a means to save Fairy Creek as a pristine, intact watershed along with other remaining groves of old-growth near Port Renfrew.

Fairy Creek protesters have maintained the blockades in defiance of a court injunction served by Teal-Jones last week — although the RCMP have yet to enforce the order.

There had been mounting support for the blockade as environmental groups pressure the provincial government to meet recommendations of the old-growth strategic review, which calls for the protection of diminishing at-risk ecosystems.

The Pacheedaht Nation is concerned about the increasing polarization over forestry activities in their territory, the letter said, adding the community and the elected and hereditary leadership are developing a forestry resource plan to identify sites of special concern or traditional use and conservation areas.

The Pacheedaht has also negotiated deferrals from the province and forestry operators with logging rights, such as Teal-Jones, within specific areas in the territory.

“This will result in the implementation of an immediate interim conservation measure,” the letter said, although it did not outline which areas were protected.

“All parties need to respect that it is up to the Pacheedaht people to determine how our forestry resources will be used,” said Chief Jeff Jones and hereditary Chief Frank Queesto Jones in a letter indicating #FairyCreek activists were unwelcome.

The nation has always managed its forest resources, including logging old-growth cedar for cultural, ceremonial and economic purposes, the chiefs wrote.

The Pacheedaht need to be “left in peace” to engage in the community-led planning process and determine its own way forward as a strong and independent nation, they wrote.

Saul Arbess of the Rainforest Flying Squad, the grassroots group organizing the Fairy Creek blockade, said the Pacheedaht statement was an important development that needed to be discussed with members and ideally the nation itself.

It was too early to say what would happen with the blockade, Arbess said.

The group’s members, located across five different camps in TFL 46, expect to meet later on Tuesday and will likely issue a statement Wednesday.

“This may be a tremendously positive development,” Arbess said, noting the Pacheedaht’s logging deferrals could address the areas of concern being blocked by Fairy Creek protesters.

“There’s much in that statement which is of great interest because it talks about conservation areas,” Arbess said.

Some members of the Pacheedaht Nation, such as Elder William Jones, have been supporting protesters in the territory.

Jones, one of the defendants in the Teal-Jones court injunction, said logging the section at the northern edge of the Fairy Creek would endanger spiritual bathing pools in the watershed. Other members of Jones’ family and the Pacheedaht have expressed support for the blockade.

However, a judge ruled April 1 that the blockade was illegal, that Teal-Jones' activities in TFL 46 follow permits issued by the province and that the individual Pacheedaht members supporting the old-growth protection in court don’t claim to represent the nation collectively.

The forestry company told the court the elected council of the Pacheedaht Nation was also aware of and did not oppose the company’s proposed logging activity in the region.

But William Jones issued a statement Tuesday saying the Pacheedaht chiefs’ letter, backed by the NDP government, was confusing and an attempt to control Indigenous voices and leadership who don’t agree with exploitation of the land.

“I implore people to continue to stand with me to protect our forests from destruction and colonialism because we need allies on the ground to stop old-growth logging in my home territory, and for my future generations and relatives,” said Jones.

“I will continue standing for the land until I am dead. I feel like an old-growth tree is worth the same as my life.”

Editor’s note: This story was updated Tuesday afternoon to include comments from a statement of support for the old-growth blockades by Pacheedaht Elder William Jones.

B.C. premier warns forestry sector, but no mention of old-growth

Seems to me, activism is as

Seems to me, activism is as welcome by Indigenous governments as by any government - get used to it.

Ancestral wisdom generally seems to land on the side of protecting intact environments. One wonders what ancestral wisdom is being followed in this case.
Frankly, there is so little old growth forest left on earth, that every single square foot of it should be maintained, as (maybe the ancestors didn't realize this) no amount of reforesting with plantations of harvestable timber re-creates a healthy ecosphere. We know that from the ancestral wisdom of other peoples (and science!!!).
There's nothing sustainable about trashing dense carbon sinks, and replacing them with plantations, in which the trees grow with too much access to resources, making them grow not as evolution determined in ecosystems set up over long time frames. The timberwood from those "reforested" trees is of vastly inferior strength and density. Compared to the timber being harvested half a century ago, it's become more like balsa wood: less dense and less strong.

I think it time to codify a

I think it time to codify a higher degree of stewardship. As a river upstream is polluted because of economic interests so downstream users of that water are hurt. There is harm here which extends far beyond any territorial or regional or sovereign scope. The old refrain of NIMBY needs a turnabout into what you do in your backyard affects this village. We do not have total inalienable rights to do as we please in 'our backyard'.
As a society must we not pull the reins of industry and our own greed against short term and profoundly destructive thinking and action?