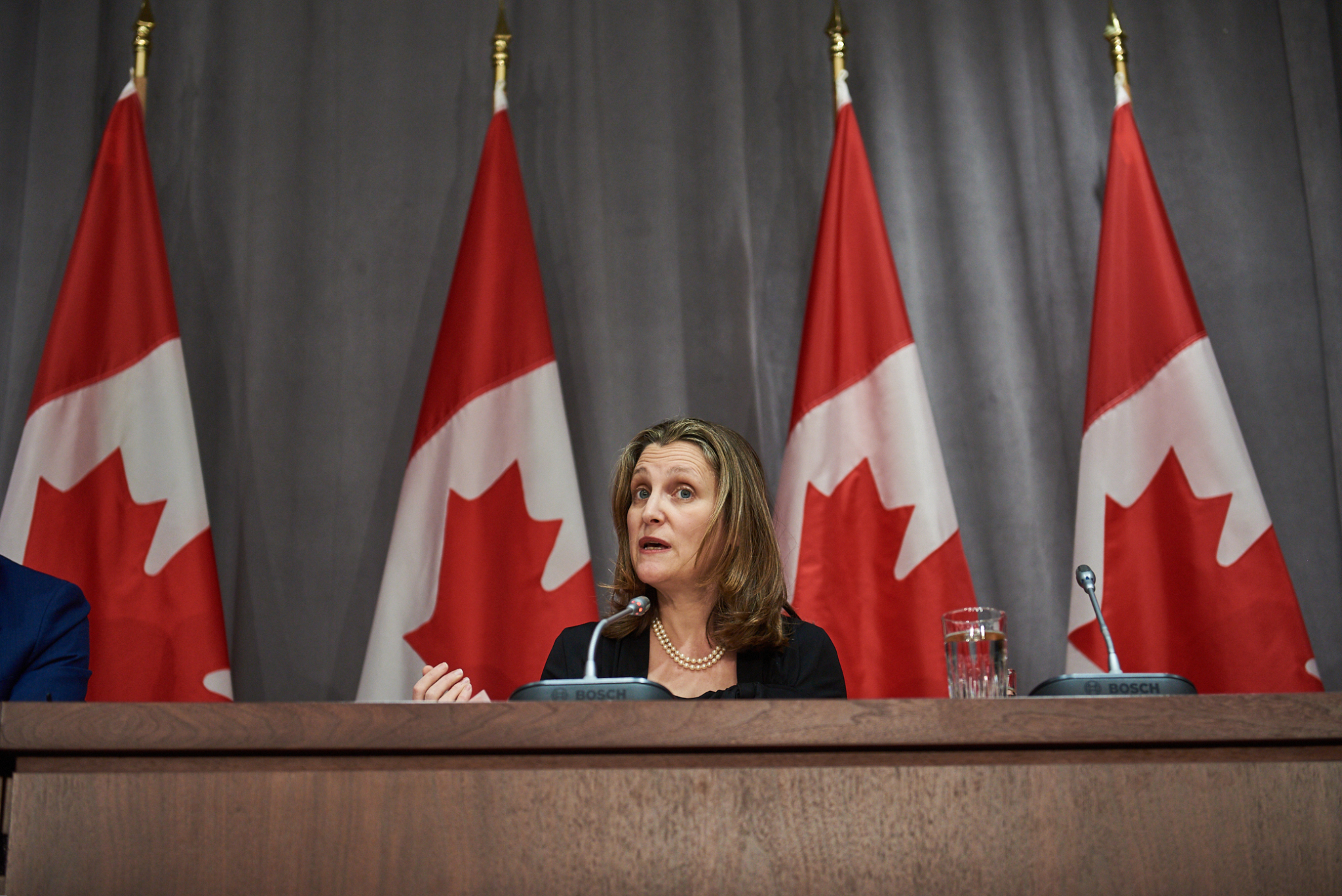 It includes a $5-billion, seven-year commitment to the government’s “net-zero accelerator” for projects meant to decarbonize heavy-emitting sectors like steel and aluminum and “attract the large-scale investments needed to meet our goal of net-zero by 2050.”

"In 2021, job growth means green growth," said Freeland when introducing the budget. "By making targeted investments in transformational technologies, we can ensure that Canada benefits from the next wave of global investment and growth."

Its signature initiative is a $30-billion, five-year commitment for child care and early learning, with an $8.3-billion ongoing commitment. If the budget survives the next election, it would be transformative for child care in Canada, experts said.

At the same time, the budget does not contain any significant commitments to cancel fossil fuel subsidies or roll out a large-scale plan for a just transition for thousands of workers in carbon-intensive energy jobs, sure to frustrate environmental advocates focused on the scientific consensus that fossil fuels need to be wound down significantly today.

As well, there are concerns the promised corporate tax cuts would go towards shareholders or executive bonuses, instead of investments in the economy.

The document represented a pivot towards a national industrial strategy for achieving emissions reductions, one that particularly helps Alberta, said Sahir Khan, co-founder and executive vice-president at the University of Ottawa's Institute of Fiscal Studies and Democracy, in an interview.

“What we’re now seeing is support for a transforming economy under a net-zero target,” said Khan.

“I think it’s important not just from an economic point of view but a political signal as well, that the federal government is going to actually support a pivot in the way that Alberta is starting to articulate in its own diversification strategy.”

A bet on carbon capture and hydrogen

Alberta, the home of the oilsands, represented the highest and also fastest-growing source of emissions in 2019. The province has embraced a strategy to produce more hydrogen fuel made from converting natural gas and has also worked toward establishing a greater carbon-capture presence in its fossil fuel industry.

The budget says carbon capture is an “important tool for reducing emissions in high-emitting sectors” and is the only technology that can “generate negative emissions.” It proposes an investment tax credit for capital put towards carbon-capture projects that will cut emissions by at least 15 megatonnes annually, to come into effect in 2022.

It also proposes $319 million over seven years towards Natural Resources Canada that would support research and development of carbon-capture technology and improve its commercial viability.

Budget 2021 also expands the list of equipment that is eligible for a tax writeoff for the full cost of investments in certain clean technologies, to include hydrogen refueling, hydrogen production through electrolysis and renewable fuel production, among others.

Environment and Climate Change Canada would get $67.2 million over seven years to implement the federal Clean Fuel Standard, which is meant to reduce the carbon intensity of fuels, and $1.5 billion over five years to Natural Resources Canada to create a Clean Fuels Fund to foster the production and distribution of fuels like hydrogen.

Teika Newton, membership and domestic policy manager with Climate Action Network Canada, also said that while some investments promised in the budget were helpful, others like carbon capture were “extremely worrisome” and risked “perpetuating our dangerous addiction to fossil fuels.”

The budget document acknowledges the Canadian clean technology sector lags behind other countries when it comes to commercial scaling up and exports, and companies face barriers to capital and domestic market growth.

In order to capitalize on the growing demand for zero-emission technology, the budget would cut in half the corporate income tax rate for certain qualifying manufacturers from 15 per cent to 7.5 per cent, or from nine per cent to 4.5 per cent for small businesses.

These reductions, which the government expects to lessen federal revenues by $45 million over five years, would go into effect Jan. 1, 2022 and would be phased out starting in 2029 and eliminated entirely by 2032. Finance Canada would be in charge of reviewing new technologies that could be eligible.

The government said the tax cuts would help Canada compete in attracting investment in zero-emission technology manufacturing. “This will advance Canada’s economic recovery and help create well-paying jobs for Canadians,” the budget reads.

David Macdonald, senior economist with the Canadian Centre for Policy Alternatives, said economic models always assume that corporate income tax cuts will end up in new investments, but this isn't necessarily the case.

"The trouble with them is that there are no strings attached," he said. "The proceeds from corporate income tax cuts can go to investments, but they are just as likely to be paid out to shareholders or to executive bonuses."

MacDonald said it was much more cost-effective to provide supports for companies when they are already doing something that is intended, pointing to the accelerated capital cost allowance in the budget.

The budget proposes funding to guard against climate-related disasters like flooding and wildfires, which are becoming more frequent and more severe as the climate crisis worsen. These disasters threaten Canada’s infrastructure as well as the health and safety of Canadians.

The government is proposing $1.4 billion over 12 years for the Disaster Mitigation and Adaptation Fund that would fund projects like rehabilitating storm water systems and restoring wetlands. A portion is expected to be dedicated to “new, small-scale projects between $1 million and $20 million in eligible costs.”

Opposition party leaders were quick to point out various economic initiatives that were not present in the budget.

Conservative Leader Erin O’Toole called the budget a "massive letdown" and said it "abandons the natural resource sector entirely.” NDP Leader Jagmeet Singh criticized the budget's lack of a wealth tax or an "excess profit tax" as well as universal pharmacare. Prime Minister Justin Trudeau, said Singh, is choosing to "continue to give his rich friends a free ride."

Bloc Québécois Leader Yves-François Blanchet said he found it "inexplicable" there was no long-term increase in health transfers in the budget, something the Bloc has repeatedly called for. The budget reiterates a federal proposal for a one-time $4-billion Canada Health Transfer top-up.

Green Party Leader Annamie Paul said she did not expect the budget’s longer-term, multi-year commitments to be fully realized, “given the unfortunate turn back to partisanship” in Parliament. Canada is widely expected to head into a federal election sometime later this year.

If you want something to get

If you want something to get done that otherwise would not be done, there is literally no point whatsoever to corporate tax cuts, even if your general approach is to try to get corporations to do the thing. Why? Corporate taxes are on PROFITS.

If a corporation is already making money doing something green, they're already going to do more of it because duh, it's making them money. Or, if they're the type who would prefer to just shovel money to the shareholders and run, cutting their taxes is just going to make that easier. Reducing their taxes will not influence their behaviour. If you want to influence corporations to do X, you need to be making the difference between X NOT making them a profit and X MAKING them a profit. So you need to be subsidizing capital investment and/or R&D in X, not cutting the taxes on their profits.

Often better would be for the government to cut out the middle man and just do X themselves.

Seems like not a horrific budget, but apparently Liberals gotta be Liberals--to hell with carbon capture and hydrogen and, for that matter, clean fuel standards. The point at this stage is not to clean fuel, it's to get rid of it.

Even if the cost of capture

Even if the cost of capture capture was zero (it's not), using fossil fuels to generate power would still be more expensive (and dirtier) than hydro and storage-backed solar and wind. The only purpose of investing in carbon capture technology is to pretend that the fossil fuel industry has a future.

If the federal government

If the federal government (and provincial governments) is serious about reducing CO2 emissions, It should target the fossil fuel producers and the industries that make products consuming those fossil fuels.
According to a 2019 report from the International Energy Agency (IEA), the growing demand for SUVs (non including small utility vehicles like pickup trucks) was the second largest contributor to the increase in global CO2 from 2010 to 2018.
In that period, SUVs doubled their global market from 17% to 39% and their annual emissions rose to more than 700 megatonnes of CO2, more than the yearly total emissions of the UK and the Netherlands combined.
No energy sector except power drove a larger increase in carbon emissions, putting SUVs ahead of heavy industry (including iron, steel, cement and aluminium), aviation and shipping.
"If SUV drivers were a nation, they would rank seventh in the world for carbon emissions."
(source: The Guardian, Oct 25,2019: "SUVs second biggest cause of emissions rise, figures reveal")
The federal government must inform the public about the harm that these types of vehicles (including pickup trucks) do to the environment as the automobile industry is abandoning the production of small cars and promoting aggressively the sale of SUVs and other non environmental vehicles. Publicity showing SUV and pickup drivers wandering in pristine environment, destroying nature and scaring animals should be banned.