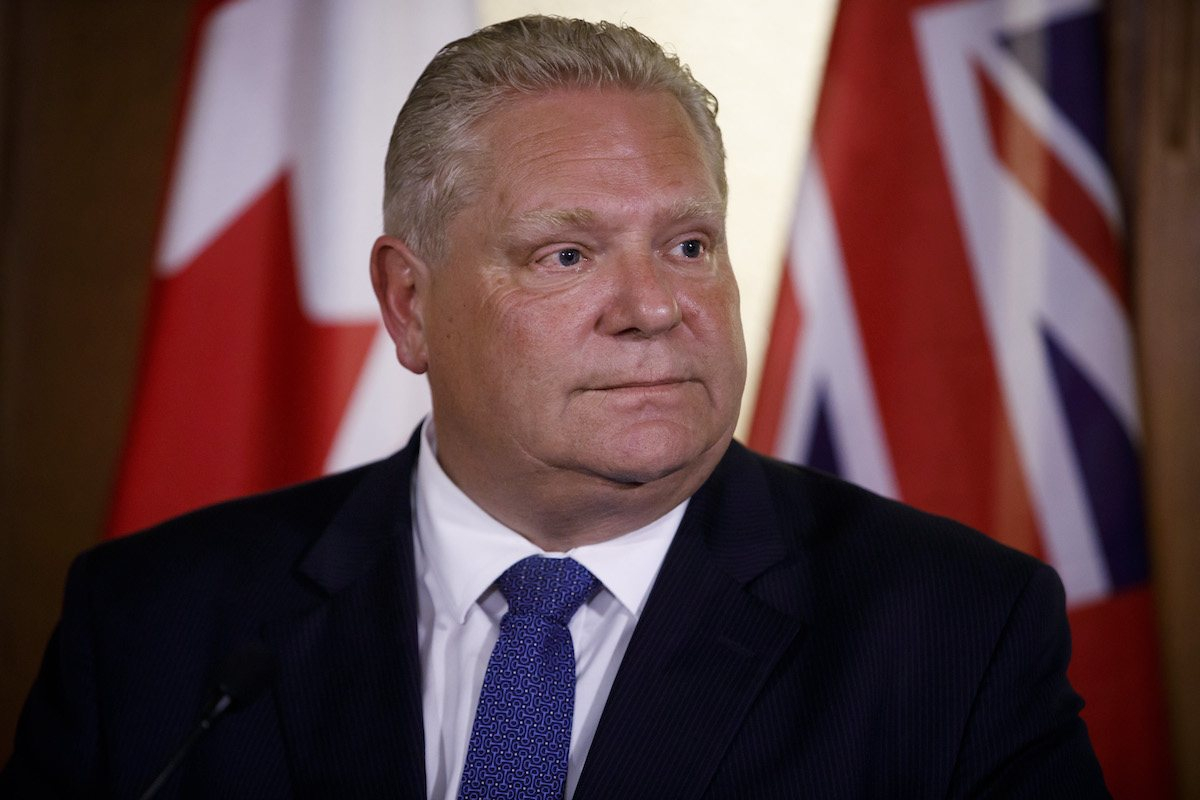 By constantly trying to balance the needs of the economy against the imperatives of a dangerous virus, premiers like Doug Ford have managed to both frustrate and infuriate their populations, writes Max Fawcett. File photo by Cole Burston
Previous story
Next story

Of all the controversial covers Maclean’s magazine has run over the years, few attracted a bigger backlash than its December 2018 edition. It featured Conservative Party of Canada Leader Andrew Scheer flanked by Doug Ford, Jason Kenney, Brian Pallister and Scott Moe, all wearing their best blue suits and sporting their best tough-guy demeanours. The headline, though, put it over the top: “The Resistance.” This was a cheeky nod to the anti-Trump movement in the United States, and the text underneath described them as a “powerful new alliance” ready to stand against the prime minister’s climate plan. “Welcome to Justin Trudeau’s worst nightmare,” it blared in boldface.

So much for that. The conservative premier quartet might actually be one of Trudeau’s best assets in the next election, whenever that comes. And while their tone-deaf approach to Trudeau’s climate plan certainly plays a role in that, it’s been their ongoing resistance to the best advice of doctors and other public health experts doing the heavy lifting here.

According to a recent Environics Research poll, when asked who they trust more to make the right decisions in handling the pandemic, Canadians in Alberta, Saskatchewan, Ontario and Manitoba were most likely to say the federal government. On the flip side, they were also the four places where residents were least likely to prefer their own provincial governments, with only 18 per cent of Albertans and 20 per cent of Ontarians trusting their premiers.

It’s no wonder. While the federal government has made mistakes along the way, from its failure to close the borders early to some hiccups in the vaccine procurement process, they pale in comparison to the litany of anti-scientific goals that have defined the responses in Canada’s “resistance” provinces.

The Ford government’s recent behaviour, which included closing playgrounds and other public recreation areas and closing public schools one day after insisting they would remain open has been particularly egregious. Andrew Morris, an infectious diseases specialist and member of Ontario’s COVID-19 Science Advisory Table, was unsparing in his description of the Ford government’s response. “They haven’t learned anything over the past six to 12 months,” he told Toronto Life. “I don’t understand it. It’s just so disappointing.”

By constantly trying to balance the needs of the economy against the imperatives of a dangerous virus, and by catering to their political base rather than trying to lead it, premiers like Ford and Kenney have managed to both frustrate and infuriate their populations. And while they may eventually pay a high political price for their incompetence, the people who voted them into power in the first place ought to reflect on their role in this.

After all, that fateful Maclean’s cover speaks to a moment in Canadian politics when populist politicians promising easy solutions, from buck-a-beer to pipelines aplenty, were on the rise. But as COVID-19 should have taught everyone by now, simple solutions are no match for the complexity of the real world and challenges like a global health crisis.

That’s why populist leaders like Donald Trump, Brazil’s Jair Bolsonaro and Great Britain’s Boris Johnson have failed the test the virus has presented in spectacular (and lethal) fashion. And make no mistake: there will be other tests in the future that these populists haven’t studied for, whether it’s climate change, wealth inequality or another pandemic.

Once we’re able to vaccinate our way out of the abyss that Ontario and other provinces now find themselves in, we need a reckoning with the politics that got them there in the first place.

First and foremost, we need to stop electing people who don’t believe in government, and who insist on running them like personal fiefdoms when entrusted with their administration. We saw what the rise of know-nothing, pro-business populism did to Great Britain and the United States, and we may have comforted ourselves here in Canada with the belief that we were better than that. We aren’t.

As COVID-19 should have taught everyone by now, simple solutions are no match for the complexity of the real world and challenges like a global health crisis, writes columnist @maxfawcett. #cdnpoli #ableg #onpoli

We also need to start demanding a higher standard of education and professional achievement in our leaders. Prideful ignorance is no match for the ever-more complex challenges of our time, and governing from the gut can have disastrous consequences. The fact that the 56-year-old premier of Ontario reportedly doesn’t even know how to use a laptop is an obvious punchline, but it doesn’t inspire much confidence in his ability to handle more complex challenges.

The good news here is that even some conservatives seem to appreciate that their movement’s ongoing flirtation with anti-intellectual populism is leading them down a dangerous road. As former Stephen Harper adviser Sean Speer wrote in a recent piece, the Liberal government’s new budget is “a powerful (and perhaps sobering) sign that progressives are winning the battle of ideas.”

So far, though, Canada’s conservative leaders still seem drunk on their preferred populist cocktail of misinformation and blame-shifting. On the same day the Liberal budget was announced, former finance critic and party heavyweight Pierre Poilievre tweeted a deliberately misleading chart about the federal debt — one that was duly picked up and shared by other members of his caucus.

There’s still time for conservatives in Canada to start taking that battle of ideas more seriously. If they do, they may yet be able to meet the increasingly complex challenges that lie ahead. But one thing should be abundantly clear: while populism can be a good way to get elected, it’s a terrible way to govern.

"First and foremost, we need

"First and foremost, we need to stop electing people who don’t believe in government, and who insist on running them like personal fiefdoms when entrusted with their administration." - More of the status quo blame the victim syndrome.
Maybe we should consider the fact that our system of governance is corrupt and dysfunctional by design in support of global capital accumulators addiction to short term profit rate/s.
Perhaps we should dispense with the consideration of the the "personal leadership" of political personalities and instead consider a governance system in which any one affected by an economic decision has the democratic right to either sanction or reject such.
Perhaps we should consider a system of governance in which 'representatives are elected at the neighbourhood level who then participate in municipal or regional councils and elect members from with in to the next level based on their evidence based performance for meeting stated local goals and plans. And so on up to the national level.
But of course the fore going is heresy in this culture and we will suffer the consequences.

I lost my mind at Ford's

I lost my mind at Ford's early sabotage of Toronto municipal elections which looked to finally be putting real local interest in power. He was willing to invoke the notwithstanding clause to make it stick.....and there was no crowds in the street protesting it everywhere.
Every assault on good governance since then has been mildly commented on by the sycophantic so called media. But anger is beginning to rise to a bubble at least even though Ontarians are a particularly passive bunch of politically uneducated naifs. I rarely meet anyone who can offer a systemic critique beyond a childlike level. ( Most citizens of Europe, and in Latin America whom I have met ,,even quite "formally uneducated" people understand the dynamic of power much better than Canadians)
And the current incarnation of the Family Compact (Westons? Thompsons?) like it just fine that way

Some perspective:
The 2003 SARS outbreak killed 44 Canadians including two nurses and one doctor; all were in Ontario.

The Ontario SARS Commission discovered many concerns and made many recommendations in preparation for the “next big pandemic”. Few of the recommendations were ever adopted.

A key element that the commission published was the concept of precautionary, basically when dealing with an unknown illness it is better to be safe than sorry and in the case of viruses hospital infection control policies for PPE are: Gloves, gown, N95 mask, face shield.
Both the federal and provincial emergency stockpiles were loaded with N95masks. Time passes and many forger or don’t know about the 2003 SARS event. At some point the stockpile overseers discover that the N95 masks have expired: these are quietly disposed but not replenished.

Enter Covid19, a new virus that is spreading around the world and as such the full airborne PPE is what the policies state should be used until we confirm the transmission route and Ontario realizes that we have no N95 mask in the emergency stockpile. The Federal inventory is also empty. Purchasing agent land learn that the world wide demand will create a delay in obtaining these products, so what our Min of Health and hospitals do? In the absence of scientific evidence they adjusted the infection control policies for our healthcare workers claiming that a medical grade surgical mask will provide a safe worker protection. Soon when concerns were raised about the potential of airborne transmission with Covid19 the new policy was created adding N95 masks for immediate healthcare staff during invasive procedures with known Covid patients.

If we had the intended stockpile of N95 masks none of these policies would have changed and staff who argued against these seemingly arbitrary changes would not have become so frustrated and feeling unsupported during the worst pandemic of the last 100 years.

We learned so much from the SARS Commission but we failed to apply the knowledge and sadly now that we are told that Ontario has ample supply of PPE including M95 masks, staff still do not have true access to them. Remember more healthcare workers have now died of Covid19 than all who died of SARS in Canada! The issue is the outstanding science behind airborne transmission....yet the SARS Commission said don’t wait for the science, better to be safe than sorry.

The leadership decisions taken to substitute the surgical masks were not communicated to hospital staff, it was portrayed as safe. Over 50 have died! A year ago at 7am and 7pm people banged pots and pans on patios and balconies to encourage our healthcare heroes, it was a great show of support but what they really needed was the mask that really protects them and that they have had to be for-tested every year to assure full protection and when the time of need arrives they are abandoned.

In January 2022 Premier Ford received formal requests from the Ontario Nurses Association and the Ontario Public Services Union for proper access to N95 masks; to date he has not replied and the N95s are not easily accessible. ONA is challenging this in court.

This premier and other populist politicians are no way to lead a province in good times or tough times; we have failed to protect the front line staff in hospitals and Long Term Care sites, 50 have died and thousands have been infected. So a year later with mo end in site and no leadership from Queens Park, healthcare staff are exhausted and many disillusioned and feel abandoned.

By the way last week the prestigious medical journal “The Lancet” published a paper on whether COVID is airborne transmissible. As the wise people of the Ontario SARS Commission said “don’t wait for the science”.

Anti-intellectualism and no government started with Pius Manning, now Pius's bastards are in charge of the Right Political Parties, they have no ideas because Pius didn't have any ideas