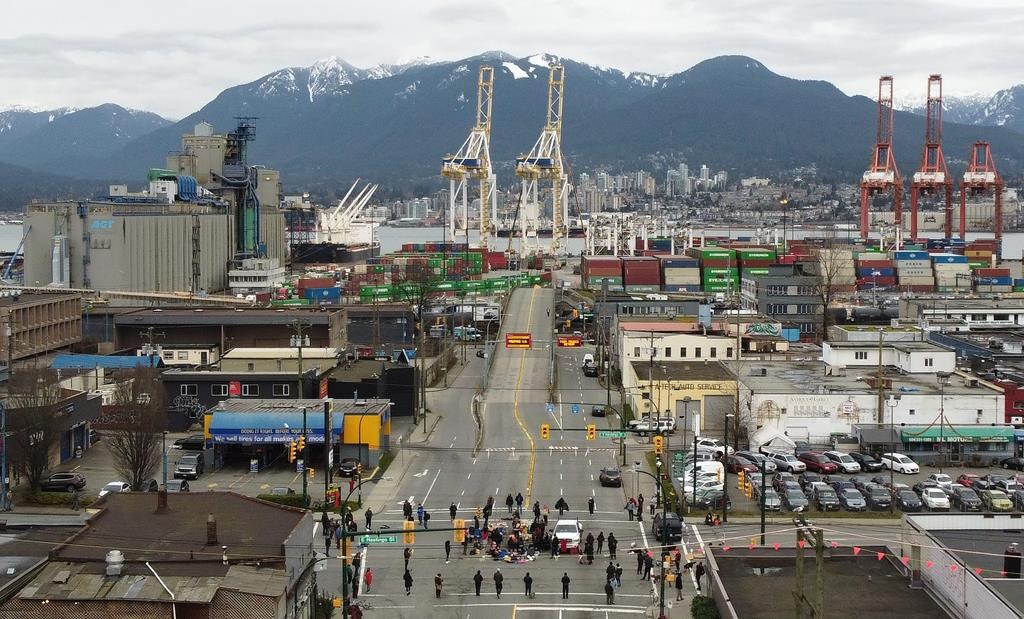 A group demonstrators, bottom centre, block an entrance to the port of Vancouver, B.C., on Wednesday, March 3, 2021. File photo by The Canadian Press/Jonathan Hayward
Previous story
Next story

Indigenous youth calling themselves Braided Warriors temporarily blocked and forced the shutdown of a major Vancouver intersection to protest a 90-day jail sentence handed to an anti-pipeline protester.

The protest ended Wednesday night, roughly 24 hours after it started.

About 20 people set up a blockade at Hastings Street and Clark Drive late Tuesday, a key entrance to the Port of Vancouver, with the number of demonstrators peaking at 75 before police intervened.

Social media posts by the Braided Warriors say members intended to shut down the port to show solidarity with an elder sentenced for his role in protests against the Trans Mountain oil pipeline expansion project.

Traffic in and out of the port was temporarily blocked due to the protest.

"(Vancouver police) strongly supports peoples’ fundamental freedom to peacefully gather, demonstrate, and express their views, and this group was given a full day to do that," Addison said in a statement.

"When it became clear some protesters had no intention of leaving, officers were forced to arrest them to reopen the intersection for all road users."

The Braided Warriors said in a social media post that the elder they had been supporting was released on bail.

Surely rhe headline obscures the story. The main story is not the simple fact that protestors were arrested for blocking access but rather something like, 'Protestors Risk Jail Time to Defend BC Coast' or 'People Defend Coast Despite Personal Peril'. People so strongly committed that they will risk jail to defend our environment is more of a story than the police making another arrest at the port. The Vancouver Sun likes headlines that obscure the motivation of persons protesting the actions of governments and oil companies. Please don't imitate the Sun.