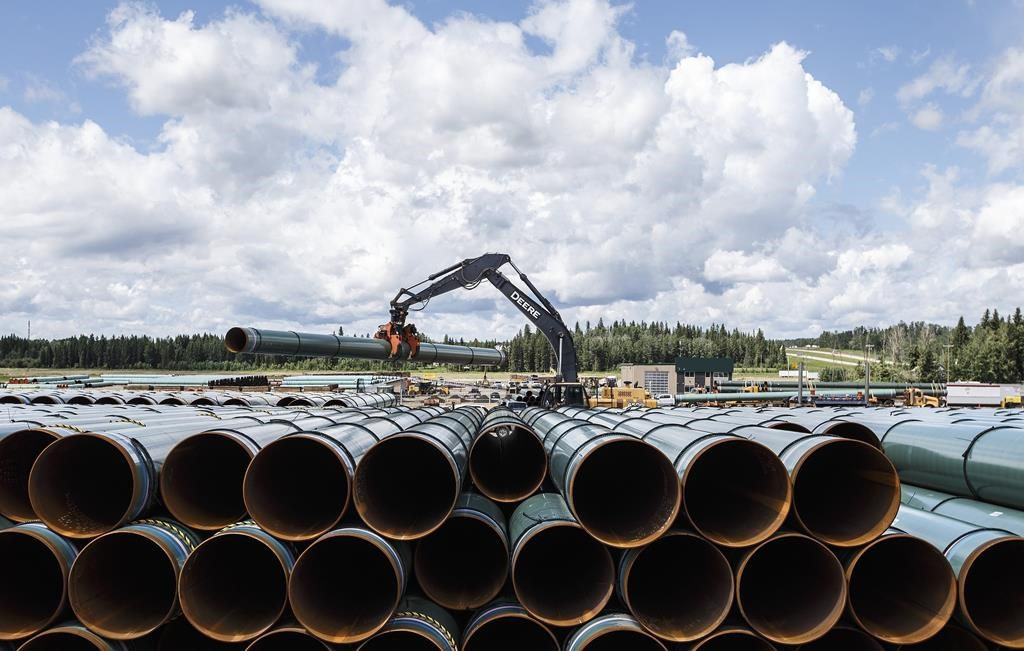 OTTAWA — Federal officials were asking themselves how many pipelines does Canada really need in the days after U.S. President Joe Biden cancelled Keystone XL.

The query was posed in a briefing note from Natural Resources Canada and released to The Canadian Press under federal access-to-information legislation.

The document, addressed to the department's deputy minister, was prepared in anticipation of meetings with those affected by Biden's January decision, including an Alberta government official, Keystone XL owner TC Energy and others in the industry.

Construction in Alberta had already begun on the 1,947-kilometre pipeline designed to send 830,000 barrels of crude oil a day from Hardisty, Alta, to Steele City, Neb., when Biden scrapped the project's permit on his first official day in the White House.

Biden was fulfilling a campaign pledge but those in western Canada's oil and gas sector, including its elected representatives, felt the move as a blow to an industry already reeling from job losses and economic headwinds beyond the COVID-19 pandemic.

Ahead of the late January meetings to discuss the cancellation with stakeholders, the federal natural resources department briefing note posed some questions: "Do you believe Canada still requires additional export capacity beyond (TransMountain) and Line 3? What do you see as the likely routes to putting it in place?"

"I think the market will decide that and I think investors will decide that," Seamus O'Regan said during an announcement for hydrogen fuelling stations for heavy trucks in Alberta.

He pointed to the fact he was even talking about hydrogen as a source of transportation fuel as an example of the transformation in the energy sector. O'Regan also referred to a report from the International Energy Agency, stating that for global energy sectors to achieve net-zero emissions by 2050 — which Canada has pledged to do — there should be no new oil and gas developments approved.

The minister said he doesn't fully agree because he sees a future with emissions-reducing technologies like carbon capture and storage, and knows energy companies are making improvements on their own.

"We are singularly focused on lower emissions," he said.

Feds ask the question; How many #pipelines does #Canada need? #cdnpoli

Whether Canada needs another pipeline remains a controversial question.

Adding to that is the reality that Ottawa, as well as major nations like United States, are setting higher targets for slashing greenhouse gas emissions and pushing policies like the shift to electric vehicles in an effort to boost the fight against climate change.

Besides the now-dead Keystone XL, Canada's other main pipeline projects are Trans Mountain and Line 3.

Last November, the Canada Energy Regulator suggested not all would be needed, if Canada keeps implementing more climate polices.

The Trudeau government paid $4.5 billion to Kinder Morgan Canada to buy the Trans Mountain pipeline to provide certainty that a planned expansion from Edmonton to Burnaby, B.C., would go ahead after court battles delayed construction.

Enbridge is also currently fighting in a Michigan court against state Gov. Gretchen Whitmer, who wants to shut down the long operating Canada-U.S. Line 5 pipeline over environmental concerns around the Great Lakes.

Tim McMillian, CEO and president of The Canadian Association of Petroleum Producers — among the stakeholders Ottawa talked to about Keystone XL's cancellation — says for many Canadians, Line 5's uncertainty underscores the need for a solid pipeline network that moves energy west and south, as well as east.

He believes more export capacity is needed because, over the next two decades, the International Energy Agency projects the global demand for gas will increase, as it will for oil until at least 2030 before flattening out closer to 2040.

"The global demand increase most certainly will be looking for supply. Is Canada the right place to be the supply or should we letting the other nine large (oil and gas producing countries) ... be the ones that step in and offer that supply?" he said.

"I would hope that our federal government is believing that Canadian innovation, Canadian science, Canadian resources are the right answer for the future."

This report by The Canadian Press was first published June 4, 2021

Tim McMillan, CEO of CAPP, "believes more export capacity is needed because, over the next two decades, the International Energy Agency projects the global demand for gas will increase, as it will for oil until at least 2030 before flattening out closer to 2040."

Someone should sit McMillan down and explain to him the difference between projections and predictions. McMillan constantly misrepresents IEA projections as "predictions" and "forecasts".
In fact, the IEA offers several possible scenarios — projections, not predictions. No scenario is inevitable. Which one we follow is up to us. We set our own energy destiny.
Typically, fossil fuel boosters refer only to the first (or base) Stated Policies scenario and fail to mention the others. The Stated Policies leads to climate disaster. Another fact the oil lobby fails to mention.
*
The IEA does not make predictions about the future.
The most recent IEA report (Oct 2020) sets out four possible scenarios based on different policy directions and emissions trajectories. Which path we choose is up to us.
Projections based on scenarios are not predictions. And neither constitutes fact.
Climate policies and our future emissions trajectory are up to us.

IEA World Energy Outlook 2020
"There is no single story about the future of global energy and no long-term IEA forecast for the energy sector. The WEO uses a scenario-based approach to highlight the key choices, consequences and contingencies that lie ahead, and to illustrate how the course of the energy system might be affected by changing some of the key variables, chief among them the energy policies adopted by governments around the world."
"Uncertainty over the duration of the pandemic, its economic and social impacts, and the policy responses open up a wide range of possible energy futures."
"Only faster structural changes to the way we produce and consume energy can break the emissions trend for good. Governments have the capacity and the responsibility to take decisive actions to accelerate clean energy transitions and put the world on a path to reaching our climate goals, including net-zero emissions.”
*
"Commentary: Understanding the World Energy Outlook scenarios"
1) The Current Policies Scenario "looks at policies in place".
2) The Stated Policies Scenario includes policies that have been announced but not enacted. It is "designed to reflect the impact not just of existing policy frameworks, but also of today's stated policy plans. … The aim is to hold up a mirror to the plans of today's policy makers and illustrate their consequences."
3) The Sustainable Development Scenario sets out the path the world must follow in order to achieve climate targets, cleaner air, and universal access to energy. It "models a rapid and deep transformation of the global energy sector. It is consistent with all the 'net zero' goals contemplated today being reached on schedule and in full."]
"Today’s energy choices will shape the future of energy, but how should we assess their impact and adequacy? This is the task the World Energy Outlook takes on. It aims to inform the thinking of decision makers as they design new policies or consider new investments. It does so by EXPLORING POSSIBLE FUTURES, the ways they come about and some of the main uncertainties – and it LAYS OUT THE CONSEQUENCES OF DIFFERENT CHOICES FOR OUR ENERGY USE, energy security and environment.
"One key element of this is to ASSESS WHERE THE GLOBAL ENERGY SYSTEM IS HEADING, BASED ON THE POLICY PLANS AND INVESTMENT CHOICES WE SEE TODAY. A second is to assess WHAT WOULD NEED TO BE DONE DIFFERENTLY IN ORDER TO REACH THE CLIMATE, ENERGY ACCESS, POLLUTION AND OTHER GOALS that policy makers have set themselves.
*
"The World Energy Outlook does not offer a forecast of what the energy system will look like but instead presents various projections to 2040 based on different policy assumptions, in order to give policy makers the tools to decide what path to follow. The main case is called the New Policies Scenario, and it models current and announced energy policies, including those in the Paris Agreement. This year, the report introduces the Sustainable Development Scenario, which offers an integrated way to achieve a range of goals: climate stabilization, cleaner air and universal access to modern energy." (2017)
*
Here's what else the IEA has to say: The world has more fossil fuel reserves than it can afford to burn:
"No more than one-third of proven reserves of fossil fuels can be consumed prior to 2050 if the world is to achieve the 2C goal, unless carbon capture and storage (CCS) technology is widely deployed."
World Energy Outlook 2012
*
IEA World Energy Outlook special report: "The Oil and Gas Industry in Energy Transitions" (January 2020)
"Regardless of which pathway the world follows, climate impacts will become more visible and severe over the coming years, increasing the pressure on all elements of society to find solutions. THESE SOLUTIONS CANNOT BE FOUND WITHIN TODAY'S OIL AND GAS PARADIGM."