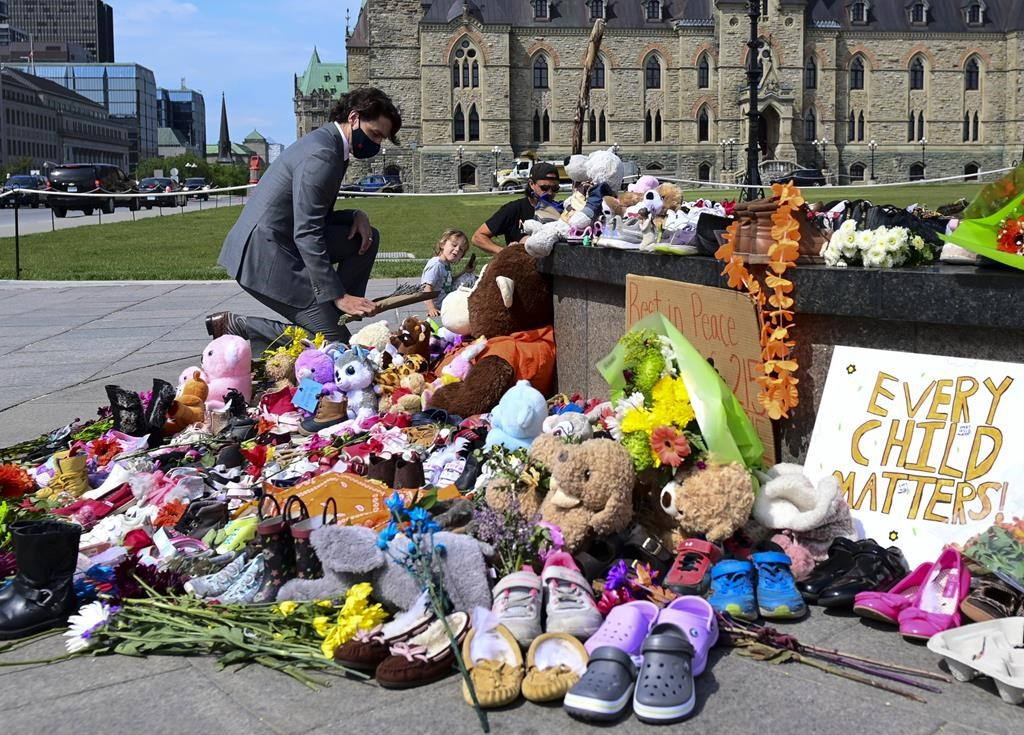 Prime Minister Justin Trudeau is calling on the Catholic Church to "step up" and take responsibility for its role in Canada's residential school system.

Trudeau said Friday that as a Catholic he is deeply disappointed by the position that the church has taken and he's urging it to release records on the schools.

He noted that he personally asked the Pope in 2017 to consider an apology for the institution's part in the government-sponsored, church-run schools for Indigenous children that operated for more than 120 years.

Last week, the Tk'emlups te Secwepemc First Nation announced that ground-penetrating radar had located what are believed to be the unmarked graves of 215 children at a former residential school in Kamloops, B.C.

Some 150,000 First Nations, Métis and Inuit children were forcibly sent to residential schools, where many suffered abuse and even death.

The discovery in Kamloops has sparked national outrage and grief, and has led to mounting calls for the federal government and church to investigate more potential school burial sites.

The Missionary Oblates of Mary Immaculate ran about 47 per cent of Canada's residential schools, including the one in Kamloops. The Oblates have refused to release their records to help identify the remains found and did not immediately return a request for comment on the matter.

Earlier this week, Father Ken Thorson, the provincial superior of the Oblates, said in a statement that the order is growing into a "deepening awareness" of the harm to Indigenous people caused by colonization and the role it played.

The prime minister said the government has tools available to compel the church to provide residential school records, but he indicated he does not want to resort to taking the institution to court.

When pressed by reporters, Trudeau declined to give details on what tools, processes and documents his government has.

Instead, the prime minister reiterated he's hopeful that religious leaders will understand this is something they need to participate in and not hide from.

"Forgiveness and redemption is a path we all are told we should be walking on through our faith," Trudeau said.

"I am confident that the Catholic Church is hearing these calls, very clearly, and is understanding the kind of dismay and grief that many Canadians are feeling right now and seeing the continued lack of action."

More than 60 per cent of residential schools were run by the Catholic Church. However, church leaders have said it did not have a unified role in the residential school system as it has a decentralized structure, meaning decisions are made by individual dioceses or orders.

Throughout the years, individual bishops have apologized for the role that different dioceses played in the residential school system.

In 1991, the Oblates offered an apology for its part in Canada's residential schools system. Speaking on behalf of the 1,200 Oblates missionaries at the time, then-President of the Oblates Rev. Doug Crosby said they wish to apologize for the instances of physical and sexual abuse that happened in the schools, and their dismissal of Indigenous cultures.

"The Oblates of Canada wish to pledge ourselves to a renewed relationship with Native Peoples which, while very much in line with the sincerity and intent of our past relationship, seeks to move beyond past mistakes to a new level of respect and mutuality," he said.

In the years that followed a number of priests apologized for the atrocities. In April 2009, Pope Benedict XVI apologized to a delegation from Canada's Assembly of First Nations for the abuse experienced by children in residential schools, calling the treatment "deplorable."

After the news of the discovery in Kamloops broke, a number of bishops released statements.

Richard Gagnon, president of the Canadian Conference of Catholic Bishops, expressed his "sorrow for the heartrending loss of the children" but offered no formal apology about the Catholic Church's role in the residential school system.

The Canadian Conference of Bishops did not immediately respond to a request for comment on Friday.

Meanwhile, Nova Scotia Archbishop Brian Dunn expressed, in a statement, his "deep sadness for the tragic loss of the children."

"Acknowledging and bringing to light this dark chapter of our Catholic and Canadian history is difficult but necessary in order to be able to do and be better," his statement read. "I continue to be committed to all who have been mistreated and hurt by the residential school experience, in which church members participated knowingly or unknowingly."

In 2018, the Canadian Conference of Catholic Bishops announced the Pope could not personally apologize for residential schools, even though he has not shied away from recognizing injustices faced by Indigenous people around the world.

That same year, Pope Francis issued an apology in Ireland and said the church did not respond with compassion to the abuses faced by women and children.

In 2015, the Pope apologized for the Catholic Church's role in the oppression of Latin America during the colonial era.

The Vatican did not immediately respond to a request for comment.

Back in Ottawa, Trudeau said it's going to be important for Catholics across the country to reach out to bishops and cardinals on this issue. He added Catholics need to make it clear that they expect the church to "be there to help in the grieving and the healing, including with records that are necessary."

In a statement, NDP MP Charlie Angus said it's been three years since his party brought a motion to Parliament calling for the formal apology of the Catholic Church and for them to turn over all documents related to residential schools and also to pay the share it owes to survivors.

"It's been three years and we're still waiting," he said.

"More than 60 per cent of residential schools were run by the Catholic Church. However, church leaders have said it did not have a unified role in the residential school system as it has a decentralized structure, meaning decisions are made by individual dioceses or orders." https://www.nationalobserver.com/2021/06/04/news/trudeau-catholic-church...

Well, that's amazing. That's almost an identical argument to the one spelled out two days ago, belonging to the federal government, who has denied any legal responsibility for the impacts on Indigenous culture of residential schools.

The government "says the loss of language and culture was an 'unavoidable implication' of 'children being educated in English or taught the Christian doctrine', according to Ottawa's amended statement of defence, filed in 2019. It admits the schools were meant to 'assimilate' Indigenous people, but denies the federal governments of that era 'sought to destroy the ability … to speak their Indigenous language or to lose the customs or traditions of their culture'. Those languages and cultures were also eroded by 'historical, personal and society circumstances' and by interactions between 'Indigenous communities and the dominant culture', along with urbanization, the federal government argued. 'While the federal government may have contributed to those losses in various ways, such losses were not as a result of any unlawful acts or omissions of Canada or its employees or agents with respect to the operation of residential schools'."

And here's the kicker, the one that resonates with the Church's claim that it "did not have a unified role in the residential school system." The federal government said "a single residential school policy" never existed. https://www.cbc.ca/news/indigenous/reparations-residential-school-1.6050501

So, when Trudeau demands the Catholic Church 'step up' and admit responsibility for residential schools, it's only because he's already 'stepped down', shirking responsibility like he just 'stepped in' a big pile of steaming shit.

I've been wanting to post something in this vein somewhere all week, it feels like there's a whole viewpoint not being expressed. A lot of these horrors continued on into the mid-20th century, but the worst of it were in the early 20th century, and back to the late 19th, further east.

I don't think we have, today, an appreciation for how moral standards have lifted over that time. Those terrible White colonists also sent their own teenagers off to WW1, and didn't get even a body back, either, and also, mostly wanted to talk about anything else by 1920.

My own grandfather was yanked out of school at 14 to become a "breaker boy" in a Scottish coal mine, like these American boys:
http://www.cuug.ab.ca/branderr/pmc/033_breaker_boys.html

The previous slide in that old talk is his 120 sf unheated shack - stove out front- he shared with two other miners, after nine years of work. (The nine years had bought him passage to Merrit, and the shack was him saving up to go bring back my eventual grandmother. He died at 49, white-haired: mine accident).

None of this excuses a thing. I'm just pointing out some background to the world this happened in. We've had generations to chew on the horrors that humans have inflicted on each other, on our own children, our own poor of every kind. When a bit of history we "didn't know", from looking away for decades, surfaces, the horror strikes as fresh.

The Americans have been absorbing the "forgotten" Tulsa Massacre for a couple of years now, re-publicized by two fine HBO fantasy/SF dramas, of all things, and are dealing with the recognition of it on the anniversary.

Stephen King drove whole plotlines with the way people WANT to forget; you can feel Iraq being forgotten right now; the older war crimes of the 1991 war already successfully suppressed and little-known, the deliberate bombings that cut the clean-water supply and killed over 100,000 kids in the following cholera and typhus epidemics. They're as dead as our TB victims, and now, they're less-well-known (except in Iraq..)

It would be valuable if the now-certain project to find more unmarked graves took several years, actually; wee need another discovery to hammer it home again, and again, every several months for a long time, to make the memory stick.