Alternative to wolf cull could save caribou in B.C.’s north 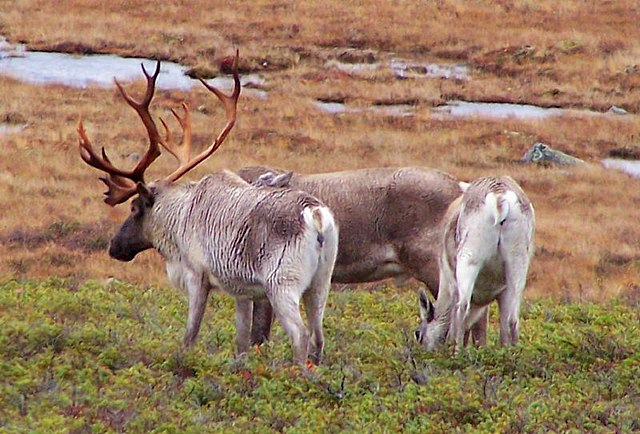 Caribou numbers have plummeted from 40,000 to 15,000 in the past 10 years in B.C. Photo by:Wikicommons/Derrick Mercer
Previous story
Next story

It was a hunch Jonah Keim hoped to prove — that using human-made obstacles, such as trees and logs, could reduce encounters between endangered caribou and wolves in northern British Columbia.

A new study published by Keim and his colleagues this week shows the methods to be effective. They had run initial research studies over the past decade, where they placed cameras in caribou habitat.

After capturing more than 500,000 photographs to study the habitat and movements of the animals, they used the data to inform how they could interrupt the path of wolves. Using those, they were able to identify the most highly used access points, block the paths and reduce wolf-caribou encounters by 85 per cent.

Canada has three types of caribou: Peary, barren-ground, and woodland, which are all threatened. Woodland caribou, which roam throughout B.C. and the rest of Canada, have been threatened by industry and climate change — their numbers are dwindling. Not only are the ecological impacts of their endangerment concerning, the animals are important for sustenance and culture for around 300 Indigenous Nations.

Known for their grey-brown coats, the hooved grazers typically live 10 to 15 years, with the females producing one calf each spring. They’re slow to repopulate, as a calf’s survival rate teeters between 30 and 50 per cent.

Keim, who has been studying caribou for over 25 years, says literally blocking the trails to make it more difficult for hungry wolves to reach their prey may be one way to help save them.

It’s an encouraging statistic supported by a relatively simple idea, one he hopes can be adopted by others and used in larger areas.

“I don't think you need to get heavy equipment or machinery now that we've done it. There's certainly been a tremendous amount of silvicultural work in the forest sector or even the utility sector with trimming trees — they do hundreds of thousands of kilometres of vegetation trimming every year,” he said.

“So I think it is something that is very scalable, very actionable. And it's going to create jobs, and it's very cost-effective.”

“The woodland caribou — they're obviously claimed as one of the greatest conservation challenges of our time,” says researcher Jonah Keim. #BC #Wolves #Caribou

In the past 10 years, caribou numbers have plummeted from 40,000 to 15,000, raising concerns they could soon become extinct. In response to the alarm, the province began sanctioned wolf culls in 2015, which have killed more than a thousand of the predators. The culls, which continue in 2021, have been called ineffective by studies and inhumane by the province’s scientists.

Keim says there’s been “overwhelming” agreement that habitat loss is a major concern for caribou, and his team attempted to restore it. Restoration can look different, he explained, and what his team did is considered functional habitat restoration — fully recovering destroyed habitat takes eons, which will be too late to save the caribou, he said.

Efforts to modify the landscape in relatively simple ways, however, proved successful. Not only were they able to significantly reduce interactions between wolf and caribou, they were also able to reduce wolf-black bear encounters by 60 per cent.

Rather than doing things like planting trees, Keim and his team felled trees, disrupted soil and used other methods to make it harder for wolves to travel on linear features, which are roads, seismic lines, recreational trails and anything else that fragments the land.

“The roads themselves, the seismic lines and trails, have opened up access and, therefore, increased the encounters between the endangered species and their predators. That’s the linkage.”

Starting July 7, the province’s wolf cull is set to be challenged by Pacific Wild, that says the cull violates provincial and federal laws. Rebeka Breder, a B.C. lawyer with Breder Law representing the organization, will argue that the government contracting people to aerially hunt wolves violates the Wildlife Act.

“Additionally, the wolf cull is unconstitutional. As outlined under federal aviation security regulations, it’s completely unlawful to have a loaded firearm and discharge said firearm from an aircraft for the purposes of an aerial cull,” Breder said in an earlier release.

“As such, Pacific Wild is arguing that the B.C. government has no authority to allow civilians to conduct such actions, and it is asking the court to put an immediate stop to it.”

It’s why alternatives are so important, says Keim. In addition to disrupting the pathways of wolves, he says it’s also crucial to limit human activity on these high-traffic pathways. Putting access restrictions on ATVing, snowmobiling and other recreational activities will also help reduce the ease of wolves.

In the Parker Range, where the study took place, there’s currently a recreational snowmobiling area within the caribou’s habitat. The perfect trails made by vehicles passing through, along with the effects from industry, have an effect on the predator-prey relationship.

He says if B.C. is going to get serious about helping the caribou, managing human interactions and being thoughtful about recreation is also part of what Keim calls a puzzle, one worth solving.

“The woodland caribou — they're obviously claimed as one of the greatest conservation challenges of our time.”

I always find it interesting

I always find it interesting when experimental science can prove something. Everyone has always known and accepted that "habitat loss" i.e. disruptions of natural wilderness are the major factor in species decline.

Being greedy humans we have failed to repair our depredations - pleading inconvenience, financial loss, etc, ad nauseum. Mr. Keim has pioneered a simple, inexpensive strategy to disrupt the human caused Caribou decline. Now, if we can just overcome the whining and sniveling of the off roaders who will be inconvenienced, and the industries that insist on unfettered access to their primary resource of wilderness, perhaps we can allow nature to repair and restore the habitat we have so wantonly destroyed.

Yes, I can already hear the

Yes, I can already hear the outcry from snowmobilers and ATV'ers. There will need to be effective communication with off-road vehicle organizations and the public in general. Keim's strategy is certainly worth a try....

The wolf cull should never have happened in BC and it needs to stop. I have watched caribou populations decline over the last 30 years in Interior BC. Despite numerous studies and recommendations, no concrete action has taken place because government and industry refuse to stop logging in caribou habitat. Everyone would rather blame the wolves. The current and past BC governments won't even pass Species at Risk legislation. It's pretty shameful and sad. As E.O. Wilson would say, future generations will be pretty "peeved" at us for not saving the caribou. They are a fascinating animal...

Wow, potentially great news. Since the roads are being put in whether the caribou are hurt or not.