Ban Ki-moon wants to solve the climate crisis with kindness 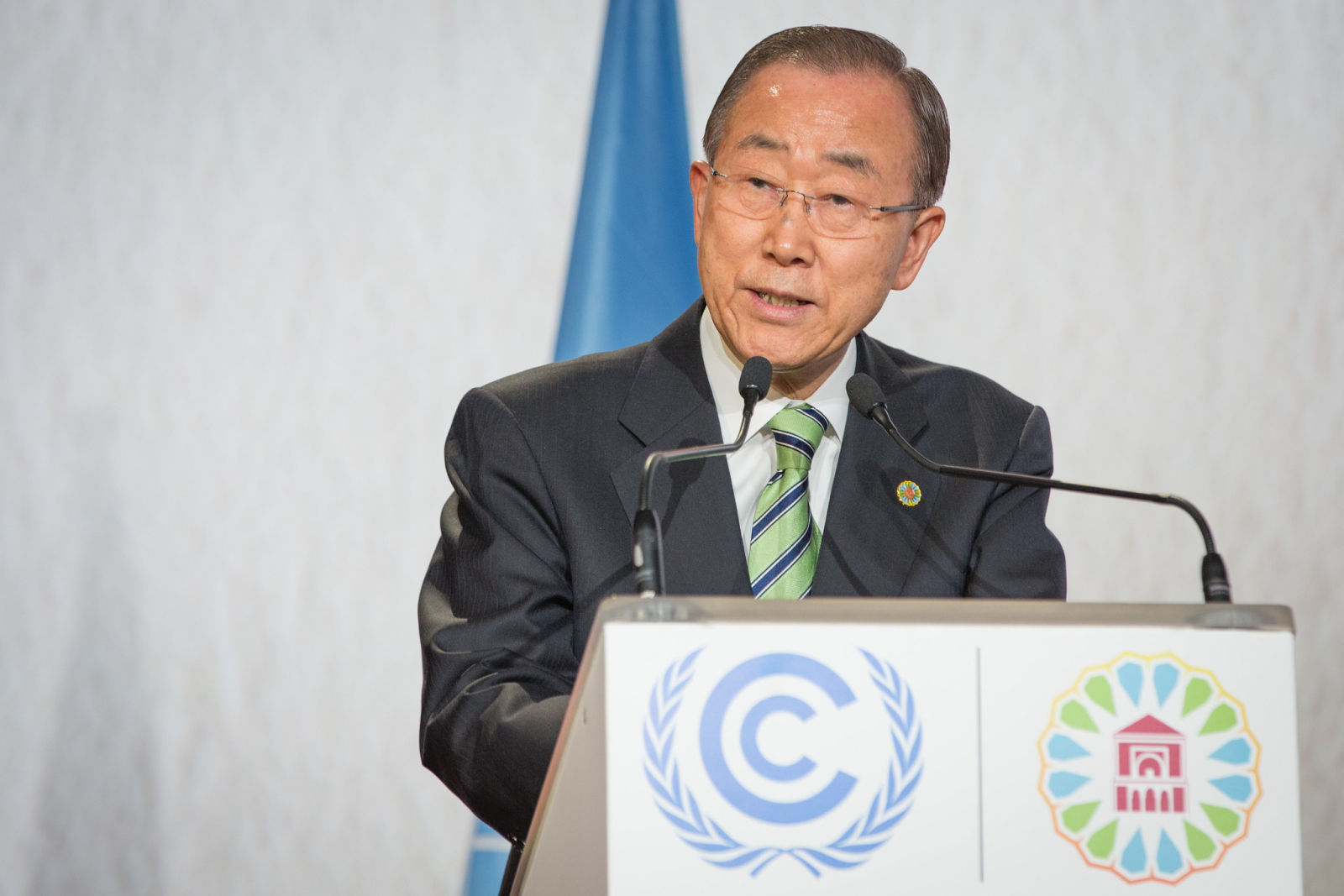 At 76, the former secretary general of the United Nations — who completed his final term in December 2016 — still wears the rimless glasses familiar from thousands of news photos. Photo by UNclimatechange / Flickr (CC BY 2.0)
Previous story

On video chat, Ban Ki-moon is almost preternaturally kind. “Thank you for your interest in my life story and my philosophy,” he says, smiling serenely. At 76, the former secretary general of the United Nations — who completed his final term in December 2016 — still wears the rimless glasses familiar from thousands of news photos. One of the most famous features Ban and two other diplomats on Dec. 12, 2015, clasping their hands in celebration of the approval of the Paris climate agreement.

Ban likes to say that he is a “child of war” and a “man of peace.” As a child, he fled the city of Cheongju with his family during the Korean War: In his new memoir, Resolved: Uniting Nations in a Divided World, he recalls travelling 15 miles to safety on foot with his father, siblings, and mother, who had given birth just three days before. As an adult, his quiet, make-no-enemies political strategy eventually raised him to the position of secretary general of the United Nations, where part of the job is mediating between warring powers (Russia, Ukraine) and navigating sticky diplomatic situations (the Iran nuclear deal).

But one of Ban’s most significant interventions may have been in the frustrating, and at times seemingly fruitless, battle against rising temperatures. Since 2006, when he first ran for secretary general, Ban has been outspoken about the threat of climate change. He has joined Jane Goodall and Al Gore in a New York City climate march; his permanently affixed smile has graced many international negotiations on global warming, including those that led to the Paris Agreement, which Ban calls “my proudest accomplishment.”

He sums up his philosophy on how to stop the world from boiling up in three words, which are simple to the point of being platitudes: passion, compassion, and perseverance. “I have been very persistent,” he says, still smiling.

Leading the United Nations is a strange job. The secretary general simultaneously wields a great deal of power, and almost none at all. According to the UN, the role is of a “chief administrative officer,” which calls to mind pencil-pushing and personnel management; former U.S. president Franklin D. Roosevelt, however, envisioned the position more grandly, calling it a “world moderator.” The secretary general has few enumerated powers, but they are expected to use their “good offices” — i.e., their relationships and the prestige of the UN — to serve as a go-between for world leaders and as a mouthpiece for the organization as a whole.

It’s perhaps this ambiguity in the secretary general position that makes talking to Ban about climate change feel so odd. Many people think about the warming planet as a technical problem, replete with questions about electricity generation, gas-guzzling cars, and airplanes burning jet fuel — but for the former secretary general, all those complications were distilled into diplomacy: a promise here, a private dinner there.

In Resolved, he notes that international negotiations on climate change after the 1997 Kyoto Protocol (the Paris Agreement’s troubled predecessor) had become a kind of “Gordian knot,” with China, India, and the United States all ducking responsibility. His only recourse was to do what the secretary general always does: talk. “I spoke about some aspect of climate change basically everywhere I went, from one hundred-watt radio stations in Central Africa to security forms in Central Asia,” he writes. “I did not shy away from raising climate change, even with known skeptics.”

The result was a series of encounters with world leaders that seem both lucky and capricious. In the memoir, Ban recounts one of his first meetings with U.S. president George W. Bush, in which — contra Ban’s UN advisers — the secretary general dared to briefly bring up climate change. Bush reacted defensively, pointing the finger at China instead. Embarrassments followed: Ban invited Bush to a climate summit, where the U.S. president refused to speak; later, Bush left an informal UN dinner as soon as he had given his own remarks.

Ban Ki-moon sums up his philosophy on how to stop the world from boiling up in three words: passion, compassion, and perseverance. “I have been very persistent.” #ClimateCrisis #ParisAgreement #UN

Despite the rough start, however, Ban and the former president became friendly over the years, and at a key moment in international negotiations on climate change in Bali in 2007 — when countries were struggling to lay out a “road map” to what would become the Paris climate agreement — the U.S. delegate called Bush for advice. “Do what Ban wants,” the president reportedly told her.

The same patient approach appeared to work on president Barack Obama, who, not unkindly, referred to Ban in his own memoir as the “nerdy kid who’s too nice to reject.” Ban tried — and ultimately succeeded — in getting Obama to attend the 2009 climate negotiations in Copenhagen, and chased the president to make a promised $2-billion contribution to a fund to help developing countries switch to clean energy.

At other moments, Ban’s delicate brokering helped to pull negotiations back from the brink. In 2015, on the final day of negotiations in Paris, the delegate from the small Central American country of Nicaragua unexpectedly blocked the deal. Ban, along with French president François Hollande, desperately called Pope Francis, hoping that he would be able to convince the Catholic country to join the agreement. But there was no answer from the Vatican, and the delegate suggested a deal: The country would play along if Ban agreed to visit Nicaragua before the end of the year. Ban agreed. “I would have done anything,” he says. The save cleared the path to a final agreement.

It’s strange to think that these microscopic negotiations — what Ban describes in his book as “cajoling, reasoning, guilting, and just plain wearing governments down” — are part and parcel of what it takes to move the world away from fossil fuels. The Paris Agreement, for all its flaws (it is non-binding, and it relies on countries to set and meet their own emissions goals), seems to be working. After former president Donald Trump announced that he would pull the United States out of the agreement in 2017, not one other country exited, despite fears that the absence of the U.S. would cause the treaty to fall apart. And earlier this year, the U.S. re-entered the agreement, and President Joe Biden’s promise to cut U.S. emissions 50 per cent by 2030 triggered a set of nations to ramp up their own emissions cuts.

Ban is relentlessly positive in the face of these developments. “I am grateful for his leadership,” he says of Biden, adding that “multilateralism is now back on track.” (Gratitude is a common theme for the former secretary general: In his book, the word “grateful” appears 36 times, and “gratitude” another 11.) Still, he is well aware of the urgency of climate change — and the areas where global governments continue to fall short.

“We really don’t have much time left,” he says. The world, he points out, has already warmed 1.3 C since pre-industrial times, bringing the planet perilously close to the 1.5 C threshold that developing countries and small island nations had hoped to avoid. And developing countries, which have contributed the least to the climate crisis, are still waiting for promised financial support. Rich countries like the U.S., Japan, the United Kingdom, and Germany had promised to contribute $100 billion to the Green Climate Fund, a United Nations effort to help developing countries phase out fossil fuels and adapt to warming temperatures, by 2020 — and then another $100 billion every year thereafter. So far, the fund only has received $80 billion.

“It is morally wrong — it is an injustice — for those countries who have not done much to contribute to the current situation to bear the brunt of the responsibility,” Ban says. For the first time in our conversation, he seems upset. “I am sometimes very disappointed and angry.”

In light of all the lobbying

In light of all the lobbying done by the military-industrial complex, etc., I still believe that there is also a need for some heavy-handedness to accompany such exquisite diplomacy...