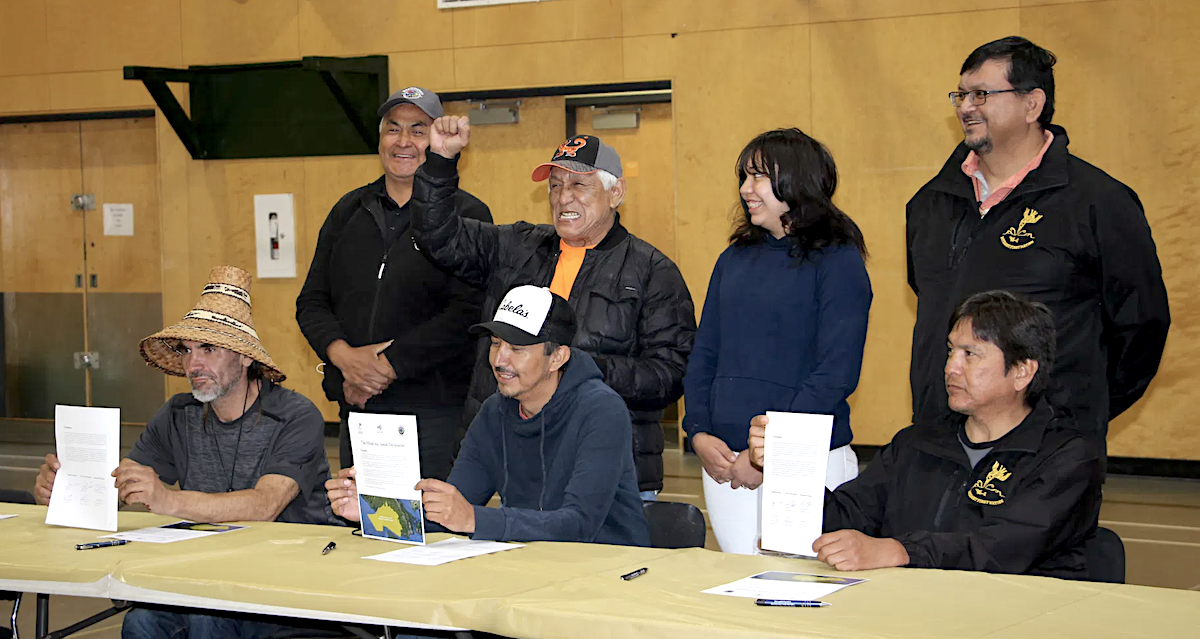 The hopes of three First Nations are likely dashed after asking old-growth activists to leave their territories following a declaration of sovereignty and the announcement of temporary logging deferrals in the contentious Fairy Creek and Walbran regions on Monday.

The Pacheedaht, Huu-ay-aht and Ditidaht First Nations signed the Hišuk ma c̕awak Declaration to take back control of their ḥahahuułi, or traditional territories, and develop stewardship plans for the region on June 4, according to a press statement. The nations informed the province of the two-year logging deferrals the following day.

The stewardship declaration signed by both hereditary and elected chiefs encompasses the Fairy Creek watershed in Pacheedaht territory — the nexus of nine-month-long logging blockades, 170-plus arrests and the trigger point for provincewide demonstrations to save old-growth forests.

The ongoing civic disobedience in Fairy Creek region, and the Caycuse and Gordon River watersheds, echoes the War of the Woods near Clayquot Sound in the 1990s.

The declaration wants all third parties, such as activists and industry or government, to respect the First Nations' right to develop an integrated resource management plan and the way they choose to manage their lands and forests, Huu-ay-aht Chief Coun. Robert Dennis Sr. told Canada's National Observer Monday.

"Hopefully, the (protest) group that's there now will respect the First Nations and what they want," said Dennis, also known as Emchayiik.

"What I've often said to them is that we have some mutual interests here, we just disagree on how to proceed with that," he added.

"We also have a huge concern about old-growth forests, and we want to come up with a management plan that will help us deal with that," Dennis said.

“Then we’ll say to the public, ‘Here's our plan, and this is how we want to see our forests managed.’"

Three First Nations in B.C. declared sovereignty over their territories and announced logging deferrals in the #FairyCreek and Walbran watersheds Monday. But protesters don't plan to leave #OldGrowth blockades until they get more details.

But the Rainforest Flying Squad (RFS) — the coalition of activists behind the blockades — said protesters won't stand down in the affected traditional territory, or logging company Teal-Jones' tree farm licence (TFL) 46, until more specific details about the proposed old-growth logging deferrals are revealed.

"While it's a welcome step in the right direction, we, and Pacheedaht Elder Bill Jones, remain concerned that it allows for the status quo of old-growth logging to continue unabated across the territory," the RFS said in a press release.

"We eagerly await details and clarification on the nations’ announcement. As of this morning we have yet to see any precise maps or confirmation that this deferral will prevent road building or active logging of old-growth."

Elder Bill Jones, one of a number of Indigenous people involved in the blockades, expressed concern the First Nations are not free to defer old-growth logging everywhere they might want to.

“No, we must not stand down, as all First Nations are locked into unfair contracts that tie their hands,” Jones said in the RSF statement.

Chief Dennis said the deferrals mean the end of road-building by Teal-Jones in the Fairy Creek watershed aimed at accessing old-growth trees.

However, that did not include road-building for forestry operations looking to extract second-growth timber, he said.

While stewardship plans are being developed, the nations stated that other logging operations approved by them outside the deferral areas in the ḥahahuułi should not be disrupted.

The RFS said any deferrals around Fairy Creek must include the entire 2,080 hectares surrounding the area, not just the old growth already under some protection in the watershed.

The group is also calling for an end to old-growth logging across special management zone (SMZ 21) in the Central Walbran Valley, which includes Castle Grove adjacent to Walbran Creek and the Carmanah Walbran Provincial Park on Vancouver Island.

According to the First Nations' announcement, it appears old-growth logging could continue in areas contiguous to Fairy Creek and in parts of the Central Walbran, and would likely continue in other areas such as the Caycuse and Camper creek watersheds, the Upper Walbran and Bugaboo Creek, said the RFS.

“So we would see (the announcement) as a very small victory,” RFS said.

Both Premier John Horgan and Teal-Jones issued emailed statements in response to the Hišuk ma c̕awak Declaration and the request for old-growth logging deferrals.

"We honour the Hišuk ma c̕awak Declaration. And we are pleased to enter into respectful discussions with the nations regarding their request. We understand the request must be addressed expeditiously, and we will ensure a prompt response,” Horgan said.

The province recognizes the nations and chiefs as the holders of constitutionally protected rights in their traditional territories and over the protected areas, Horgan said, adding the province is committed to reconciliation.

“I know the three nations are ready to enter into these discussions in a spirit of good faith, and with a goal of achieving a mutually satisfactory resolution. Our government is as well."

Teal-Jones plans to abide by the declaration and deferral requests and looks forward to engaging with the three First Nations as they develop their integrated stewardship plans, the company said.

“Teal Jones acknowledges the ancestral territories of all First Nations on which we operate and is committed to reconciliation,” the email said.

“In recent years Teal Jones has had productive working relationships with 106 First Nations in B.C., the specifics of each engagement reflecting the interests of the First Nation.”

However, the company did not clarify in the email how the deferrals are expected to impact logging in the regions outlined by the nations.

The new declaration by the three nations commits to managing resources in the ḥahahuułi according to the sacred principles of ʔiisaak (utmost respect), ʔuuʔałuk (taking care of) and Hišuk ma c̕awak (everything is one), said Dennis.

The nations have been stewarding resources in the territory since time immemorial, and it is their responsibility to decide what is best for their lands have the right to benefit economically from its resources, the declaration said.

“We have really sacred principles and that's why we want to take over and take, take care of our land,” Dennis added.

“We’ve seen years and years of resource harvesting that totally messed up our land,” he said.

“And now we need to be given enough time to get that straightened out, because it's not moving at a pace that we're satisfied with.”

Anyone who requests permission to enter our ḥahahuułi is welcome provided they conduct themselves in accordance with our sacred principles, the chiefs said.

"That includes safe, peaceful and lawful protest that does not interfere with legally authorized forestry operations.”

But none of the activists or groups involved in the current blockades have approached any of the First Nations to ask permission to be on the territories, Dennis said.

“You know, when I have my own home and I invite people to come in, you're welcome,” Dennis said.

“But I don't offer the Welcome Wagon to somebody that comes in unannounced and uninvited.”

I'm finding a real lack of

I'm finding a real lack of factual background information on this story.
For instance, who, exactly, did Teal-Jones contract with? The elected band leaders, or the leaders according to the applicable traditional processes relating to leadership?
I think the simple truth of the matter is that, First Nations, descendants of colonizers, descendants of settlers, and immigrants of any description, all need to recognize the impacts of forests and logging on climate change, and to all co-operate in whatever can be done to turn around the current very-very-bad situation with climate change.
I'm not convinced that logging for profit was part of any traditional First Nations lifestyle. Or road-building, for that matter.