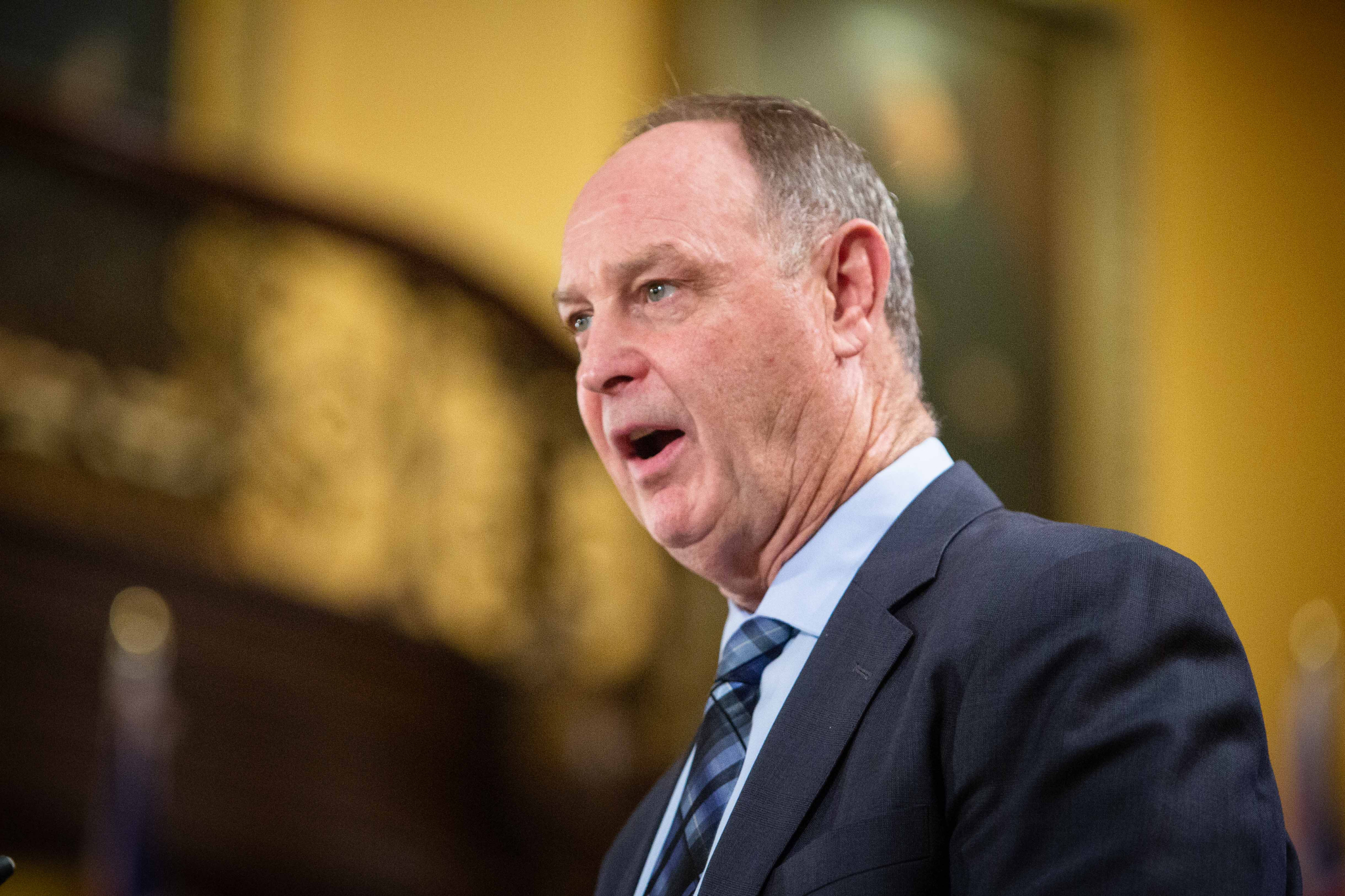 Ontario Natural Resources and Forestry Minister John Yakabuski is among a group of Canadian politicians pushing against a California bill that takes aim at boreal forest logging. File photo by Alex Tétreault
Previous story
Next story

The Ontario government is crying foul as a bill taking aim at logging in the boreal forest moves through California’s state house.

The law, called AB 416, would require contractors working for the state to prove that products coming from boreal and tropical regions respect the rights of Indigenous people and aren’t linked to forest destruction. In its text, advanced by the state assembly earlier this month, lawmakers noted that deforestation plays a role in fuelling the climate crisis and is often intermingled with the violation of Indigenous consent.

In response, Ontario, Alberta and Quebec and the Consulate General of Canada have decried the bill in letters to California legislators, arguing it unfairly targets the country’s forestry industry.

“It's been a little bit baffling given that the bill itself doesn't actually call out Canada as a bad actor,” said Jennifer Skene, the natural climate policy solutions manager of the Canada project at the Natural Resources Defense Council, a New York-based non-profit.

“The bill would only have any kind of effect if Canada is not living up to these standards.”

The legislation wouldn’t ban or restrict California from sourcing forest products from the boreal forest. But it would require state contractors to ensure that if they are, the wood wasn’t harvested while violating Indigenous peoples’ right to free, prior and informed consent.

The bill would also restrict state contractors from buying products that come from boreal forests that haven’t been logged before, but would allow them to use goods that come from replanted forests. (About two-thirds of Canada's managed forests have been logged at least once.)

The push has been backed by environmentalists on both sides of the border and a group of investors representing US$1.6 trillion in assets.

In a statement to National Observer, Ryan Ferizovic, a spokesperson for Yakabuski, said leaders in more than 40 Indigenous communities have also taken issue with the bill. He also said Ontario’s regime has “strict” regulatory requirements and “thoughtful management” that ensures logging sites aren’t degraded.

A California boreal logging sustainability bill is raising the ire of Ontario, Quebec, Alberta and Canada's Consulate General. "The bill would only have any kind of effect if Canada is not living up to these standards," said Jennifer Skene of @NRDC.

“This bill targets one of California’s most responsible, secure and reliable suppliers of forest products and puts at risk jobs on both sides of the border,” Ferizovic said.

Canada’s Consulate General echoed those concerns in a separate letter, also pointing out that the country is a “friend of California forests” and sent firefighters to assist with devastating wildfires there in 2020. Quebec’s Forests, Wildlife and Parks Minister Pierre Dufour and Alberta’s Agriculture and Forestry Minister Devin Dreeshen also sent similar letters arguing their provinces’ forestry systems are sustainable.

The Forest Products Association of Canada (FPAC), an industry lobby group, has also raised concerns about the bill. Canadian logging standards are aligned with United Nations’ sustainable forestry standards, and the bill could drive business to other markets with lesser rules, the group said in a statement.

FPAC also said it’s concerned about the bill’s focus on forest degradation — “deforestation” is a term with internationally recognized definitions, but “degradation” isn’t so clear, it said.

“This creates uncertainty and concern among the forest sector and workers, labour groups, governments and the many people and communities whose livelihoods are depending on a sustainable and inclusive forest sector across Canada, including within the boreal forest,” FPAC said.

Skene said that approach is contradictory.

“'(Canadian governments have been) trying to simultaneously argue that Canada is a good actor, but then saying they would be unduly targeted by these bills,” she said.

“To the extent that Canada is living up to its claimed sustainability, it would actually be benefited by this bill because it would hold all tropical and boreal countries to the same standards.”

About 28 per cent of the boreal zone falls within Canada’s borders, with the rest found mainly in the United States, Norway, Sweden, Russia and China. Not all the logging done in Canada happens in the boreal zone — it also takes place in coastal forests in B.C. and Carolinian forest in Ontario, for example. Policies in place across the country also dictate that areas logged by industry must be reforested.

It’s not clear exactly how much product from Canada's boreal forest is exported to California. But in a letter to California legislators, Canada’s Consulate General said California imported US$949 million ($1.17 trillion) in building materials and other forestry-related goods in 2020.

The bill’s stipulations around Indigenous rights could be a challenge for Canadian jurisdictions, Skene said. Though Canada passed Bill C-15 this week to align its law with the United Nations Declaration on the Rights of Indigenous Peoples, the country’s path there has been long and reluctantly taken.

“This bill is trying to guarantee and make sure that California is not itself implicated in these violations of internationally recognized Indigenous rights,” Skene said.

Ferizovic said Ontario’s logging regime is globally recognized for its high standards, and includes consultation with Indigenous and Métis communities. FPAC and the federal government have also argued that logging in Canada doesn’t contribute to deforestation, and that replanting practices ensure it’s sustainable.

But in the last year, Canadian logging practices have come under increasing scrutiny.

In Ontario, the provincial government is facing a lawsuit from three First Nations who allege Doug Ford’s Progressive Conservatives failed to consult them properly on forestry management plans. The province is seeking to double wood production by 2030 and has exempted the forestry industry from following endangered species law.

Meanwhile, a high-profile fight over logging and Indigenous sovereignty is playing out over old-growth, non-boreal forest in Fairy Creek, B.C.

For nine months, activists and First Nations have blockaded the Fairy Creek area on Vancouver Island seeking to defend some of the last sections of ancient rainforest in the region from logging. More than 200 people so far have been arrested in recent weeks for continuing the blockade despite a court injunction requiring them to leave. At the heart of the conflict is the province’s approach to logging, which hasn’t protected old-growth forests.

Canada’s forestry industry has recently also come under fire for the climate impacts of its operations and the environmental footprint of logging roads.

California’s bill has passed the state assembly, and must now go before the senate before it can be signed into law by Gov. Gavin Newsom. New York State is also considering similar legislation.

“There's a broad recognition among legislators and policymakers that climate impacts within California are growing, that forests are really critical to addressing the climate crisis,” she said.

“For California to really lead on this front, it needs to be not only engaged in aggressive decarbonization, but to be stopping or addressing the state's own impacts to forests globally.”

This story was updated to clarify the amount of managed forest in Canada that has been previously logged.

methinks doug and yak doth protest too much. as the article points out, no probs for Ontario forestry NOT violating indigenous rights to consent. ( might want to pull back on the arial spraying of settlements with agent orange north of superior??)

If "world class forestry" means protecting soil, water and biological diversity; and mitigating the climate emergency, forestry across Canada gets a failing grade. Forestry is among the highest emitters of greenhouse gases, and frequently is at the top of that list. The only thing that is world class about Canadian forestry is the speed at which we have turned bountiful natural forests to dollars. Numerous climate scientists have called for forestry to be replaced by proforestation, where forests are protected to live out their natural lifespans and provide us with essential benefits that are far more valuable than money. As a forest ecologist and forester, I have more than four decades of experience working across Canada, particularly in the boreal forest and throughout BC's forests. The boreal forest is Earth's largest terrestrial carbon sink, with most (80%) of the carbon stored beneath the ground. In this era of climate disruption and biodiversity loss, the boreal forest, which is extremely sensitive to disturbance from logging, has far more value as a carbon sink and vibrant source of biodiversity than it does as logs.

So who is lobbying for this

So who is lobbying for this bill? If I was a Californian contractor, I would just not buy Canadian lumber rather than embark on the paper work and effort needed to ensure that the lumber I buy is non-Boreal and/or Boreal but respectfully harvested. This looks more like a non-monetary tariff, outlawed by our free trade agreement, than a genuine attempt to save the "Boreal Forest". It will also be a great opportunity for US forest industry to green-wash its lumber.