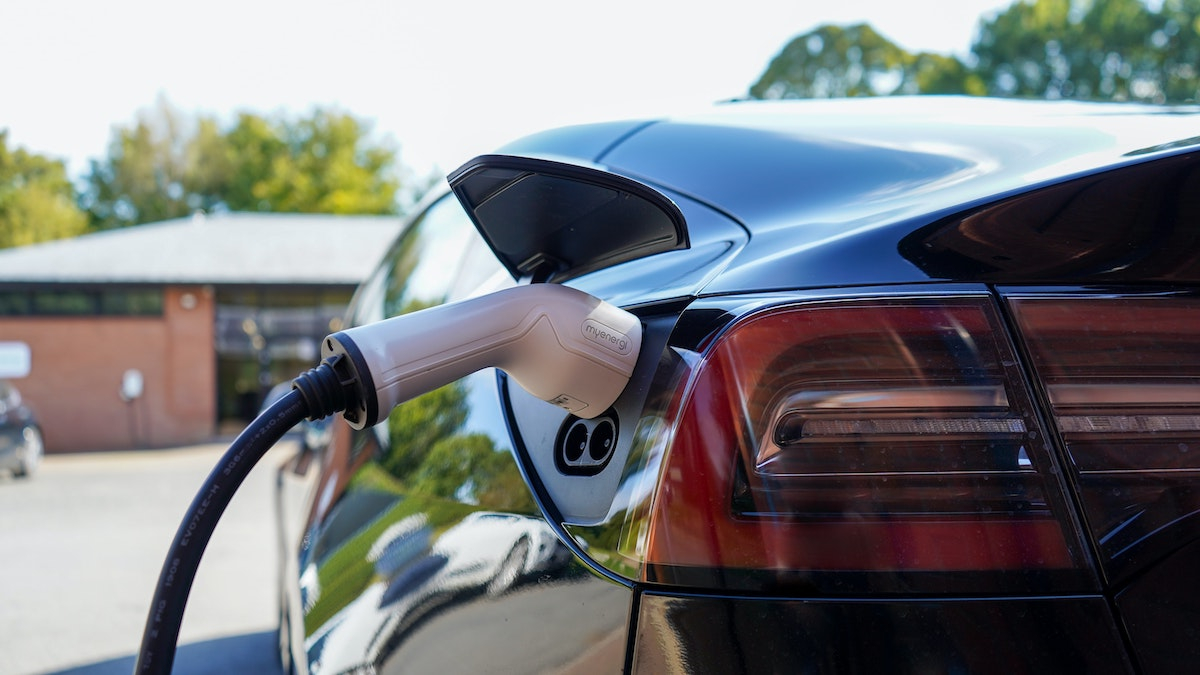 In an asphalt lot just north of New York City, yellow school buses are resting their wheels until classes resume in September. But three electric buses at the depot in White Plains, N.Y., will be working overtime this summer break. Rather than transport students, they’ll mainly serve as a big battery bank, storing power and feeding it to the local utility’s electrical grid when demand is high. Starting this month, Con Edison will use the buses daily to help keep its grid running smoothly during the hot summer months.

The demonstration project is among dozens of so-called “vehicle-to-grid” initiatives underway in the United States and around the world. As bigger vehicles like buses, garbage trucks, delivery vans, and even the Ford F-150 pickup truck ditch their engines and go electric, their batteries represent a potentially enormous source of energy storage and backup power supply. Although the concept was developed in the late 1990s, vehicle-to-grid is gaining traction now as automakers release more electric models, smart charging technologies improve, and millions of new electric vehicles, or EVs, hit the road every year.

New York’s school bus experiment began in 2018 with two main goals: to reduce nasty tailpipe pollution from diesel buses, and to explore whether it makes sense financially and technically to turn the buses into mini power plants. Brian Ross, Con Ed’s manager for the White Plains project, said school buses were a good place to start because the school schedule aligns well with the grid’s needs. Electricity demand tends to be highest during the summer, when people blast their fans and air conditioners. Parked buses with nowhere to go can plug in and support the stressed-out grid.

At the depot, the three Lion Electric buses each have batteries that can store 104 kilowatt-hours of energy — roughly the size of three Nissan Leaf battery packs. The buses also have two-way, or “bidirectional,” onboard chargers that receive power and feed it back into the grid. (Most EV chargers flow in only the first direction.) Smart charging software allows all the components to communicate, so that batteries charge when grid demand is low and send back power when demand is high.

Last December, the buses began exporting power to the grid on weekends during six-hour shifts. On June 25, they’ll begin delivering a combined 33.5 kilowatts, or 0.03 megawatts, of power for six hours every day. That amount of power is relatively tiny, but there’s potential to expand. About 8,000 school buses operate in Con Ed’s service area of New York City and neighboring Westchester County, which includes White Plains. If electrified, the bus fleet could collectively supply more than 100 megawatts of power to the grid for short periods — or nearly one per cent of Con Ed’s peak summer power demand, an amount Ross said makes a “material” difference. That could reduce Con Ed’s reliance on gas-fired power plants and offset the need to upgrade grid equipment.

On a broader level, vehicle-to-grid systems could help utilities navigate the transition to cleaner electricity and transportation. As more wind and solar power comes online, the batteries could absorb excess renewable energy and deliver it later, after the wind stops blowing or the sun goes down. And the systems could prevent electric vehicles from overtaxing the grid by managing how and when they charge. Around 550 million battery-powered vehicles are expected to hit the road globally by 2040 — up from 13 million vehicles today — representing a huge boost in power demand, according to the clean energy research firm BloombergNEF.

“Electric vehicles aren’t just a new burden for utilities,” said Suzanne Russo, the CEO of Pecan Street, an Austin-based research organization, “but can help make power more reliable for everybody.” In 2019, the group launched the first vehicle-to-grid pilot project in Texas, which used a Nissan Leaf to supply power to the utility Austin Energy during the highest hours of electricity demand.

Vehicle-to-grid initiatives — where electric vehicles store power and feed it back to the electrical grid in times of high demand — could help local utilities better meet people's needs.

Yet for all their promise, many market and regulatory hurdles have kept vehicle-to-grid systems from becoming mainstream. A key barrier is cost. For instance, electric school buses can be three to four times more expensive than diesel models, and two-way charging systems are also more costly and complex than traditional EV chargers. In some municipalities, it’s currently possible for a bus operator or EV owner to earn money by selling their battery’s services to a local utility. Whether those earnings can offset the additional expense is something researchers are still figuring out.

For individuals, the average payout might amount to only tens of dollars a year, said Michael Webber, an energy resources professor at the University of Texas at Austin who studied the issue. At that rate, many EV owners might decide it’s not worth the hassle of securing the necessary paperwork and equipment to connect their batteries to the grid.

But vehicles with two-way charging technology are still appealing for another reason, one that Ford played up in recent ads for its electric F-150 truck: batteries can also power houses and appliances, even if they’re not connected to the grid. In one Ford commercial, after a storm knocks out the city’s power and houses cascade into darkness, a family plugs their F-150 into the garage wall and lights up the house. In another scene, a food truck operator connects to the truck to keep their business running.

“The resilience value is high,” said Webber, who is considering installing a stationary battery or a vehicle-to-grid system at his home in the Austin suburbs. He said the house has lost power six times so far this year, including during the brutal winter storm that left millions of people without heat or power in subfreezing temperatures in February.

For now, many people with bidirectional chargers will likely use vehicle batteries within the confines of their home — as emergency backup for outages, to store extra rooftop solar power or to power their house when electricity rates are most expensive, said Ryan Fisher, an electric vehicle researcher at BloombergNEF in London. That would still benefit the grid, he added, by taking pressure off the system during hours of peak demand, when gas- and coal-fired power plants typically rev up.

True vehicle-to-grid systems are expected to catch on first within the commercial vehicle sector. Operators of big-rig trucks, taxi fleets and delivery vans face rising public pressure from policy-makers and community leaders to eliminate toxic tailpipe pollution and greenhouse gas emissions, and many are turning to battery-powered models. Operators can also access state and federal funding for air quality improvements or clean energy development to help cover some of the upfront cost of cleaner vehicles. Con Ed, for instance, is sharing the cost of the electric buses in White Plains with New York State’s energy agency. And Nuvve, a leading developer of vehicle-to-grid technology in San Diego, recently launched a $750-million joint venture with the private equity firm Stonepeak Partners to invest in grid-connected fleets, including thousands of electric school buses nationwide.

“For us, the school bus is just the beginning,” said Marc Trahand, Nuvve’s executive vice-president of marketing. The company is providing the software platform for Con Ed’s school bus demonstration, along with similar initiatives in California, Florida, Illinois and beyond. “Think about all the trucks that deliver your FedEx, UPS, Amazon packages during the day,” Trahand told Grist. For vehicle-to-grid, “they’re ideal because they’re large fleets, and we can use their batteries at night when they’re not running around.”

Connecting batteries to the grid would also more fairly distribute the benefits of EVs overall, said Russo of Pecan Street. She pointed to the fully-loaded electric F-150, which costs around $80,000. A family that can afford the pickup could use it to survive a power outage during a freezing winter storm. But if enough vehicles are connected to the grid, they could help keep the lights on for other households, including those that can’t afford EVs.

“It’s really important to ensure that if we’re providing public dollars, through rebates or incentives, to encourage people to invest in EVs, that those EVs are benefiting everybody,” she said. “Vehicle-to-grid is a way that can happen.”

This can add resilience to a

This can add resilience to a system, but is not a good idea for regular use. Vehicle batteries have to be light and rugged, whereas the grid can use cheaper pumped hydro storage. It also keeps people thinking about continuing with absurdly overweight vehicles. Manufacturers are using built-in inverters to sell new vehicles, but anyone can just buy one and add it to an existing electric or hybrid.

Does it really matter where

Does it really matter where the battery is located? This arrangement of using what already exists - electric buses - is the equivalent of circling the block and avoiding getting right to the point. Besides the fact that it's perhaps necessary to start somewhere, wouldn't it be a better use of funds to just go directly to what's needed - large-scale power storage?! This might even include a major re-evaluation of "the grid", with the aim of reducing the size of areas covered by power sources, thus enabling better two-way exchange of power...

This strategy is little short

This strategy is little short of "vital" to the greening of power. The largest problem with switching to renewables is storage. David Roberts at Vox did an excellent, accessible article on a complex MIT study that showed we can't turn off all the gas plants with their lovely "dispatchable" power-on-demand, until storage drops to $20/kWh.

That's really cheap: our fondest battery hopes don't show it getting down to $50 any time soon. Pumped-Hydro can be that cheap, but not often, mostly it's twice that. And the projects to build them will take a decade or more - and the dams aren't just anywhere you need them.

This is a unique opportunity: the population is on the brink of buying 10 million vehicles with nearly 100 kWh of storage, each. That's hundreds of available gigawatt hours - and they border on FREE, because the battery was purchased for another reason entirely.

It may not profit anybody to put in grid-powering systems to millions of homes. But if the home charger could just power the home (and it's soon-to-exist electric heat pump instead of a gas furnace) through the shortage, that would be a huge load off the grid.

But parking lots, corporate fleet parking, all those large charging systems could afford the extra electronics to power, not just the office or warehouse, but back to the grid. Amazon has ordered 100,000 trucks. That's 10 gigawatt-hours. Just Amazon.

The electrical standards should allow no installs of chargers that can't at least run whatever building the charger is in. And no major charging installations without back-to-grid capability. I'm sorry to do anything that might slow eV adoption, but storage is absolutely essential to the green switchover, and this is a remarkably lucky opportunity to pass a miracle, create storage for under $20/kWh.