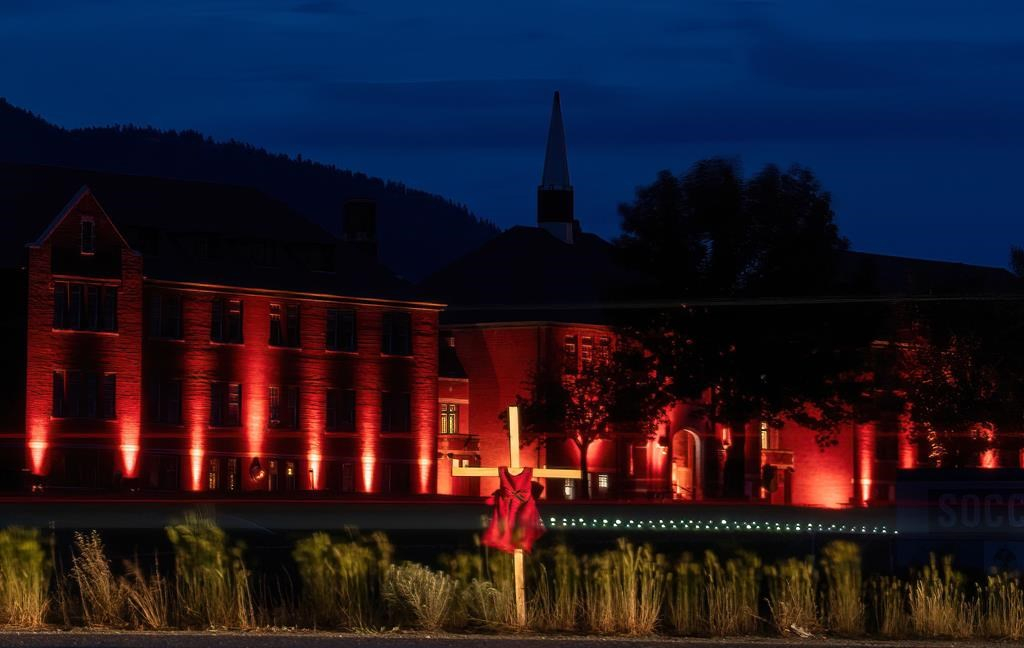 A child’s dress is seen on a cross outside the Kamloops Indian Residential School in Kamloops, B.C., on Saturday, June, 13, 2021. File photo by The Canadian Press/Jonathan Hayward
Previous story
Next story

Bob Hilbig's crisis of confidence in the Roman Catholic Church isn't his first reckoning with the institution that shaped his childhood. It's not even his second.

But the discovery over the past month of what's believed to be nearly 1,000 bodies in unmarked graves at two former residential schools for Indigenous children could prove to be the last, he said, unless church officials take responsibility.

"I'm really hopeful that there is some transparency and atonement to go around," Hilbig said. "I'll be analyzing...I'm going to be paying close attention to how they react."

The disappointment that came with news of the residential school grave sites carried reminders of past personal letdowns, he said, including the 2005 appointment of ultra-conservative Pope Benedict XVI and the co-ordinated coverups of priests' sexual abuse of children.

Given that recent history, the 35-year-old Hilbig said, along with what he already knew of the residential school system, the discovery of the suspected remains didn't come as a surprise.

Hilbig, who lives in Richmond Hill, Ont., is among the lapsed and practising Catholics who are re-examining their relationship with the church given the recent news.

Cowessess First Nation in Saskatchewan announced Thursday that ground-penetrating radar detected 751 unmarked graves at the cite of the former Marieval Indian Residential School. Last month, the Tk'emlups te Secwepemc First Nation said the same technology found what are believed to be the remains of 215 children at a former school site in Kamloops, B.C.

After initial resistance, the Missionary Oblates of Mary Immaculate — the religious order that operated both schools — pledged to release all their records related to all such facilities.

So did the Sisters of St. Ann, an order of nuns whose members worked at residential schools.

Hilbig said those moves give him hope that the institution that was the bedrock of his youth could start to redeem itself.

While he's been given cause to question the former, he knows his faith will remain steady.

When he was 10, Hilbig said, he and his extended family surrounded his grandfather as he died.

"And when he did, he smiled. That's been a sort of an anchor for me, and it's rather unshakeable," he said.

"My relationship with God isn't bound by the church. It's informed through the (church's) teachings, but it's not bound by it."

Hilbig said it may be time for governments in Canada to reconsider their relationship with religious institutions as well.

"I hope this is an inflection point for Canada to evolve," he said.

Shannon Bernard of Toronto is grappling with similar questions.

Her eldest son is wrapping up Grade 1 in Catholic school and her younger boy is due to start junior kindergarten in the fall.

Bernard was adopted into a Catholic family and attended Catholic school as well. She began to question the church as a teenager and no longer considers herself a member of the religion, but decided to enroll her boys in Catholic school at the advice of some teacher friends.

She's now second-guessing her choice, wondering whether the system will offer her sons the education about residential schools she missed out on when she was a student.

"I definitely have considered maybe a switch out of the school system if it just remains the status quo," Bernard said. "I'm just hoping to see some changes over the next few months or a year."

Bernard, who is First Nations and has family members who attended residential schools, said she's also looking to the church for an apology she doubts will ever come.

Pope Benedict XVI expressed "sorrow" over the residential schools in a statement in 2009, but Bernard said that isn't enough.

"It was an acknowledgement, not an apology," she said.

The current pontiff, Francis, has also stopped short of a formal apology, which has disappointed Clara Casucci-McLeod of Niagara Falls, Ont.

The 67-year-old's first schism with the church came roughly three decades ago when a Catholic priest refused to officiate her marriage to a divorced man.

Casucci-McLeod's distaste at the drive to convert non-believers to Catholicism — amplified about a decade ago when she started learning about the atrocities committed in the residential school system in God's name — served to deepen the rift.

But tight family ties to the religion kept her connected to the institution even as her faith changed, so she was watching the last papal conclave with interest.

"I had such high hopes for Pope Francis," she said. "I remember when he stood on that balcony, and I remember crying when he came out and feeling this overwhelming feeling of, this is such a good person. He is going to make a difference.

"And I believe he has. But he hasn't gotten far enough. He's so disappointed me."

Enough of the "soul searching

Enough of the "soul searching". Just stand up, go to the aisle, and walk out of the door of this abominable institution. The Lutherans, Anglicans, United Church of Canada, and a host of other institutions will be happy to have you.

The "other" religions may be

The "other" religions may be happy to have new converts but they have their own biases, bigotries, and racism to confront. In short, none of us are without sin and none of us can righteously cast the first stones. Humanity, needs to cultivate a great deal more humility.

Personally, it's at times

Personally, it's at times like these when I'm eternally grateful for my protestant upbringing! I converted to Catholicsm about 20 or so years ago, and have befriended some "cradle catholics". There are many times when I've felt sorry for their "indoctrination" with so many attitudes like the ones described in this article. My very wise mother described the situation as one of an ancient church - the people who were for the most part uneducated - being fed ways of interpreting a faith in a supreme being that they could understand, compared with a later interpretation that did away with many imprinted rote habits and laid more bare the essentials. Consequently I believe that it has been easier for me to live in a basically loving way, while celebrating the best parts of the faith, and not feeling guilty about it.
Just my take...