One Indigenous girl’s brave response to the residential schools 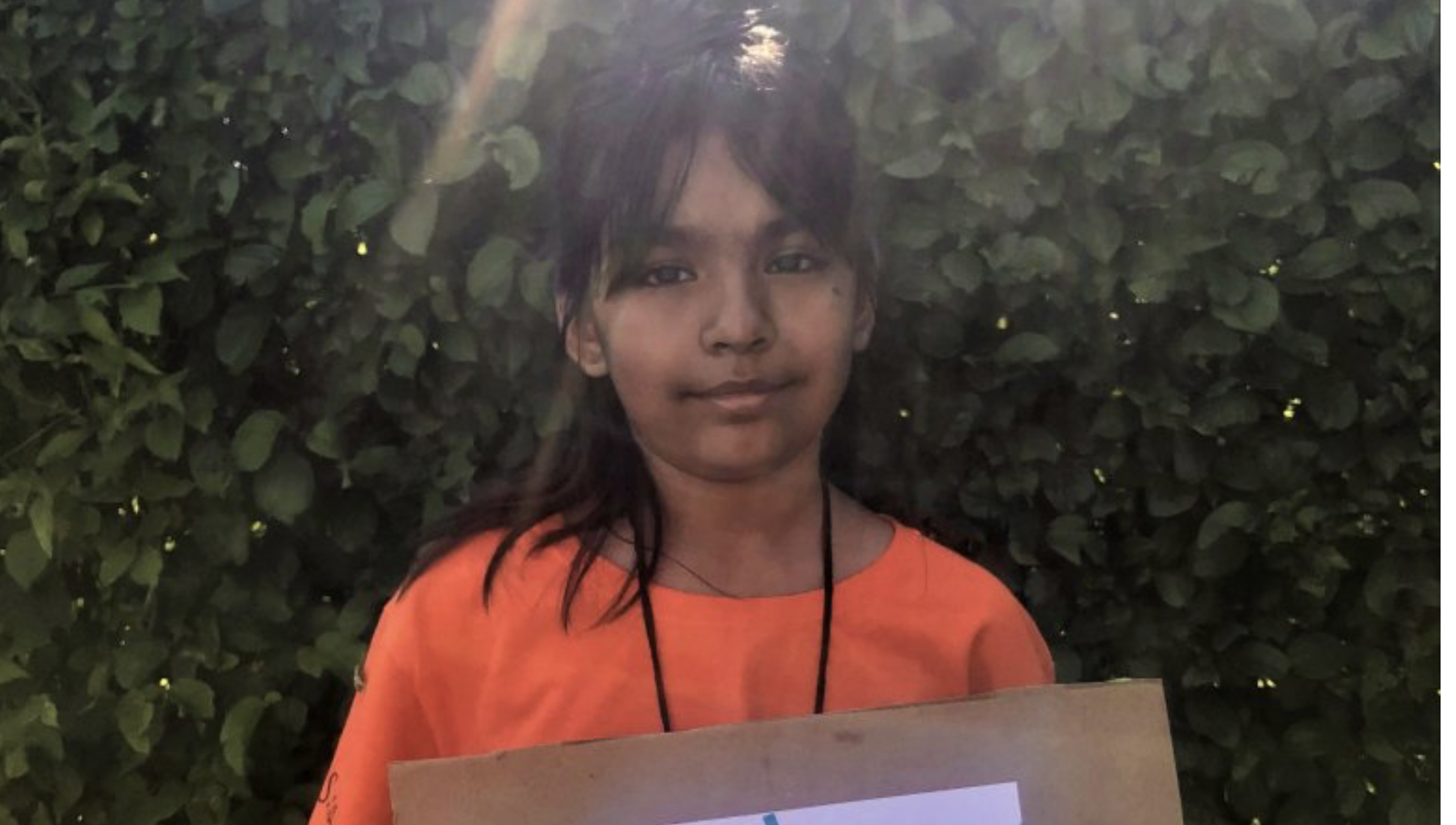 To prepare for the march from Queen’s Park to the statue of Egerton Ryerson, one of the architects of the residential schools, Zephyr made her own protest signs. Photo submitted by Julian Brave NoiseCat
Previous story
Next story

When my baby cousin Zephyr’s mom, Ashley Edwards, heard the news: That the remains of 215 children — some as young as three — had been discovered on the property of the Kamloops Indian Residential School in B.C., she didn’t know if she should tell her daughter. How do you explain to a little girl that her people — her blood, her own family — were kidnapped and incarcerated at schools where they were beaten for speaking their parents’ language, told their gods were devils and taught to hate themselves for being Indian. Zephyr’s Nana, her biological father’s maternal grandmother, went to the Kamloops residential school as a child. Her Qné7e, her biological father’s paternal grandmother, received her nursing degree from the school. These were the remains of their classmates, their friends, their cousins. It could have been them. Can a child comprehend that? Can an adult? Can a nation?

At first, Ashley wasn’t sure it would be right to burden an eight-year-old with this heavy knowledge — until a few years ago, the survivors in our own family rarely spoke about the residential schools. Ashley talked it over with her hubby, Matt. But the news exploded like a landmine, ripping through the social and digital networks that constitute society, shredding the notion that the truth about residential schools could ever be reconciled with the myths of the country that built them, puncturing even the most protective motherly nests fostered to shelter eight year olds so they can learn some things only when it’s time.

When Zephyr, who we all call “Zeph,” came asking about residential school survivors, Ashley knew she had to tell her daughter the terrible news. You can’t buy a ticket to an R-rated movie in Canada until you’re a legal adult, but Zephyr was in Grade 3 when she learned that the Kamloops Indian Residential School, the Catholic church and the Canadian government had, for generations, hidden the corpses of 215 Indigenous children — kids like her, some almost undoubtedly her own kin. When Ashley told Zephyr, she held her baby girl close, chose her words carefully and sobbed. “It was hard for me to speak about it because I was in tears,” Ashley said. “We all knew for so long. But then there was proof, there was evidence of it. Being a mom, I couldn’t imagine, you know?”

Ashley told Zephyr there was going to be a march in Toronto for the 215 children and that it was her choice if they would go. She believes it’s important for her daughter to have a say in these matters, to self-determine from a young age. Zephyr said she wanted to attend. “I felt sad because they should have had long lives,” she told me. “It’s not right their lives were taken. The nuns and priests are murderers and should be in jail.” And so, they gathered their things: markers and materials for signs, drums for songs and traditional medicines to help the demonstrators — and themselves — heal. Ashley remembers it as the second-hardest conversation she has ever had with her daughter.

The hardest was about Zephyr’s father Dakota, my closest-in-age cousin (our birthdays were less than a month apart). Ashley often thinks about Dakota — and his absence. She still doesn’t understand why, when the two of them had a home and when Zephyr was on the way, he picked up without explanation or warning and went back to the streets, only turning around to visit his daughter twice. You see, Dakota lived much of his young adulthood hitching rides with his guitar on the CN Railway. Before his mother Bonnie, the daughter of a Kamloops residential school survivor, died, Dakota would travel with her. Everywhere he went, he lent a helping hand at protests and encampments where people dared to question the colonial status quo. He met Ashley at Occupy Toronto in 2011. And he left his mark with friends who adored him and in places he knew intimately across the country. His tag “Reaper” could be found on the sides of trains and buildings from Vancouver to Montreal, often with the phrase “Nowhere Bound” scrawled beneath.

When I was a cub reporter in 2017, one of his many friends showed me one of those tags in a back alley in Winnipeg’s West End. It was a dozen or so blocks from where he had turned up dead earlier that year. “I think about it all the time. I try to make sense of it. Part of me: I live with grief, I live with anger, I live with joy,” Ashley told me. “I’m upset because he didn’t get to see how awesome (Zephyr) is. I look at her all the time and I see him in her clearly. She does look a lot like him.” When Ashley told Zephyr about Dakota, it was after Zephyr had already started asking questions. Maybe that’s just how the blood memories of departed fathers and residential school survivors work. Ashley tried to put it all in “kid terms.” “I said that he made decisions,” Ashley recalled, “he chose to live his life a certain way.”

We think Zephyr got her creativity and her gentle, loving nature from Dakota. To prepare for the march from Queen’s Park to the statue of Egerton Ryerson, one of the architects of the residential schools, Zephyr made her own protest signs. One was a drawing of a turtle with a black, white, yellow and red medicine wheel on its back. The phrase “Turtle Island,” an Indigenous term for North America written neatly above, “By: Zephyr,” below. The other said:

How do you explain to a little girl that her people were kidnapped and incarcerated at schools where they were beaten for speaking their parents’ language, told their gods were devils and taught to hate themselves? asks columnist @jnoisecat

Zephyr posed for a photo in her orange shirt with that one, revealing a toothy smile. She brought both of her signs and both of her hand drums to the march, and offered her medicines — sage and the like — to the singers as they made their way through the streets of Toronto. Like many of the other demonstrators, she also brought a pair of her tiny, kid-sized shoes to leave in memory of the 215. “I wanted to share that I care and have love,” Zephyr said. “I used my turtle rattle and made a new friend that was a drummer.”

Zephyr isn’t like many of the children around her. She’s the only Native kid in her class. And she has different abilities than other students. For her, art comes easy, but reading has been a challenge, as it was for me and many others in our family. Some schools and teachers haven’t handled that well. Zephyr and Ashley have had to fight the education system to be treated with dignity. But this year, the pandemic scrambled the Toronto school system and Zephyr ended up in a class with kids from all over the city and a teacher who gets it: Mr. Rimer. When news of the 215 bodies broke, Mr. Rimer reached out to parents, letting them know he intended to discuss the history of the residential schools in class, offering parents and students — particularly the parents of Indigenous and racialized children — the opportunity to opt out. Zephyr opted in. She asked if it would be OK if she didn’t stand for O Canada anymore and if she could share a recording of the Women’s Warrior Song, composed by our great aunt Martina Pierre of Mount Currie. It’s sung at Indian gatherings and protests across the continent. “All the adults in my life were supportive, loving, encouraging and kind to me,” Zephyr told me. “My teacher was proud. He always makes time to share. My classmates were respectful, they enjoyed the song.”

When I called on Father’s Day — just a few days before 751 more bodies were discovered at the Marieval Indian Residential School in Saskatchewan — Zephyr and Ashley were preparing for a little lakeside excursion to celebrate Matt, who has been there for Zephyr and who has helped Ashley work through all of this for years. Mother and daughter had just finished baking a couple dozen vanilla cupcakes, “with sprinkles.” Zephyr had gotten Matt a card with a big panda on it. As we started the interview, my baby cousin was a little nervous. Most prime ministers struggle to answer questions about genocide, and most kids don’t have to share their stories with journalists. But Zeph talked through her thoughts and feelings with Ashley. She wrote them down so she would remember and get the words just right. When I interviewed her, she spoke at a deliberate pace, with something akin to wisdom. She had lived through a lot even before she was born, after all.

But then, when I asked if she was proud to be Indigenous, she blurted out: “Yes, obviously, yes!” as though she was a teenager and my question was dumb. (It probably was.) Zephyr wants to learn to hoop dance and bead. She’ll have a ribbon skirt to wear to all the powwows and marches soon. (Her mother is a Guyanese Indian Canadian, so I like to joke that Zephyr’s Indian on both sides.) “I am proud to be Indigenous,” Zephyr said. “We are water, land and animal protectors. I am proud to do all of those.”

“I’m so proud of you,” I told her before we said our goodbyes over the phone. “You can take your interview anxiety off.”

“If only Julian could see your smile,” said Ashley.

With any luck Zephyr belongs

With any luck Zephyr belongs to a generation that will refuse to be cowed by White Canadians. She and her kin will wear their indigenous identity with fierce pride. and join forces with the rest of the world of non-white skinned people to recover their natural supremacy.