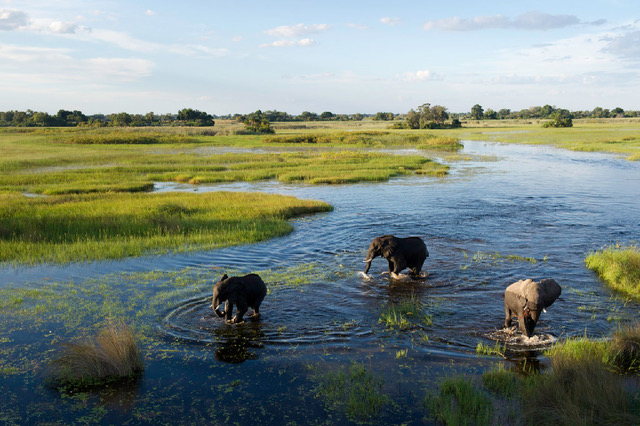 Reconnaissance Energy Africa (Recon), a small-cap Canadian mining company, is exploring for oil and gas in Namibia’s Kavango River Basin. Industry experts say this may be the largest oil play of the decade. Unfortunately for Recon, its exploration activities are close to a number of protected areas with highly vulnerable wildlife populations. And they are within the watershed of a major UNESCO World Heritage site, the Okavango Delta.

As a result, many Namibian and southern African tourism and environmental groups are opposing the project, and the southern African Anglican bishops have called for an “immediate halt” to drilling because it threatens local water supplies as well as the livelihoods of Indigenous people. International organizations such as Greenpeace, AllianceEarth and OilChange International, together with prominent publications such as National Geographic and the Globe and Mail, have added their criticisms. Predictably, Recon has responded by stating it is operating in full compliance with local Namibian law and international good practice.

At first blush, this may seem of little interest to Canadians. But Recon is a registered Canadian company selling its shares on a Canadian stock exchange, the TSC-Venture Exchange. It may therefore be subject both to Canadian law and to Canada’s international commitments, even if it is operating outside Canadian territory.

Canadian mining companies already have a reputation for ignoring human and environmental rights in their international work, and getting away with it. But this may be changing: In a recent landmark ruling, a Canadian court found that Canadian mining company Tahoe Resources was liable for human rights violations in its Guatemala mining operations. After hearing many similar challenges, the federal government recently appointed a Canadian Ombudsperson for Responsible Enterprise (CORE), tasked with handling complaints of human rights violations by Canadian companies in the mining, garment, and oil and gas sectors.

The Tahoe precedent could have direct implications for Recon’s work, as local complaints about the company’s activities are focused primarily on the rights of Indigenous Namibian peoples, in particular, their control over water and land resources. But there is another increasingly important issue for Canada: The impact of new fossil fuel extraction on Canada’s Paris Agreement targets. In past weeks, even prestigious organizations such as the International Energy Agency (IEA) have proclaimed that new fossil fuel development must cease if the Paris goals are to be realized. And the International Institute for Sustainable Development has released a report showing that G7 countries, including Canada, are continuing to expand public funding for gas developments in Africa and Asia, in direct contravention of their Paris commitments.

Now a South African-based firm of environmental lawyers is putting pressure on the Canadian government to take account of Recon’s work in Namibia. In a letter to Prime Minister Justin Trudeau, copied to opposition parties, Schindlers Eco Forensics argues that “… the (Recon) project (is) in contravention with the provisions, and spirit and purport, of the Paris Agreement” and that “… it would also place a larger burden on developed countries like Canada to financially assist Namibia in the mitigation of carbon emissions during, and subsequent to, the project.”

This is a ground-breaking argument. Schindlers maintains that Canada is just as responsible for the impacts of oil development in Namibia as Namibia is itself, since a Canadian company, operating in accordance with Canadian laws, will ultimately be directly responsible for the extraction of these fossil fuels and their impact on the global carbon budget.

And that impact is significant: The Kavango field could yield a “carbon bomb” big enough to consume one-sixth of the world’s remaining carbon budget.

Does Canada’s government always have a legal obligation to take actions that prevent catastrophic climate change? One viewpoint, still being tested in the Canadian courts, contends that governments must implement mechanisms domestically that are commensurate with their Paris commitments. The flipside of this obligation is that governments may also be required to constrain extraterritorial actions by their own companies or citizens that endanger such commitments.

The latter position is now gaining significant legal traction. Oil Change International has suggested that export credit agencies (such as Export Development Canada) must “… share countries’ responsibility to scale back their fossil fuel financing, consistent with scientific considerations and the temperature goals of the Paris Agreement.” In a similar vein, Friends of the Earth is challenging the U.K. export credit agency’s funding of fossil gas developments in northern Mozambique.

Even outside their borders, countries like Canada may be required to curb actions by their own companies or citizens that threaten the environment, writes @GeoffStiles1. #CleanEnergy #ClimateAction #cdnpoli

The Schindlers letter brings this issue home to Canada by asking the feds to “undertake a comprehensive due diligence in relation to the (Recon) project … regarding human rights and environmental rights,” further arguing that Canada must require companies like Recon to cease actions which are inconsistent with our support for the Paris Agreement.

The time has come for Canada to address this obvious discrepancy in its climate policies. The prime minister must task either CORE or the minister of environment and climate change to investigate the question of Canada’s legal responsibilities to curb extraterritorial fossil fuel development by Canadian companies under the Paris Agreement, and by extension, Recon’s right to increase the global emissions burden.

Geoff Stiles is an Ottawa-based consultant on climate change, carbon finance and energy policy. He spent 23 years living and working in southern Africa, including many camping and canoeing trips to the Okavango Delta and the Kavango River Basin, where Recon is basing its exploration work.

IT is certainly true the extraction sector that Canadian Universities have so proudly fostered over decades, doing their part to turn Canada into a loyal empire building colony, making giant strides in geological engineering, turning out generations of dedicated oil/gas/mining pioneers and entrepreneurs. They are still at it.

Why doesn't some multi-billionaire not fund Research centres in Canadian universities to find ways to make "extraction" more environmentally sustainable; to fund studies that determine how the entrepreneurs can rehabilitate (or better yet, prevent) the devastation of land, water, species they leave in their piratical exploitative wake?