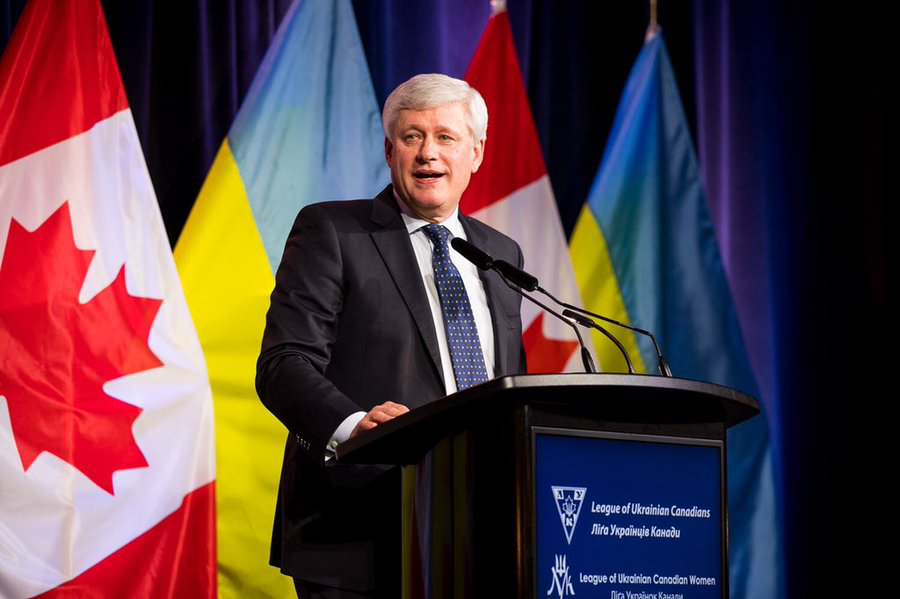 You know things are bad for federal Conservatives when, on the eve of a widely expected election call, many of them are talking about how much they miss their former leader. Few seem to miss Stephen Harper more than Postmedia columnist Rex Murphy, who penned a political love letter to Canada’s 22nd prime minister last week after he appeared on a podcast called American Optimist. “The insights and experience of a person who led our country for a decade is not a resource, like Alberta oil, to be left in the ground,” Murphy wrote.

It’s not hard to see why Murphy is waxing nostalgic about Harper. With some polls predicting a double-digit lead for the Trudeau Liberals and virtually every poll showing them ahead of the Conservative Party of Canada, it’s clear Erin O’Toole’s leadership hasn’t been any better than Andrew Scheer’s. But while Canadian conservatives may secretly yearn for Harper to return to politics (a recent poll suggested he’d only be trailing Trudeau’s Liberals by five per cent rather than the 14 per cent gap they’ve opened up with O’Toole), he may actually be the biggest impediment of all standing between them and a return to power.

After all, it’s clear that while Harper resigned as the leader of the Conservative Party of Canada in 2015, he hasn’t relinquished his role as the leader of the Canadian conservative movement. Rex Murphy may want to pretend that Harper has abandoned his feud with Justin Trudeau, but the facts here don’t care about his feelings. Harper’s influence over Scheer was well-documented, and as Alec Castonguay noted in a profile for L’actualite, Scheer “rarely takes an important decision without consulting his former leader.”

Harper’s influence over Jason Kenney’s government in Alberta might be even more apparent, and that’s not just because his son Ben works as a policy adviser to the premier. Kenney’s senior staff is marbled with former Harper employees and advisers, and the former prime minister even delivered a pep talk to the United Conservative Party caucus earlier this summer as it threatened to splinter apart over the government’s COVID measures.

So no, he hasn’t stepped away from Canadian politics so much as he’s stepped behind the curtain. But it’s his work back there that ought to concern Conservative strategists the most. After all, he’s been wrong about almost every major issue since he left office, from his warm embrace of populists like Hungary’s Viktor Orbán and India’s Narendra Modi to his ongoing willingness to defend Donald Trump. “The Trumps and the Brexiteers at least want to fix what is not working with democratic, market-based economies,” he wrote in his 2018 book. “The Sanderses and the Corbyns of this world, permanently stuck in their adolescent rage, would burn the system to the ground.”

He was even wrong about his own election defeat. In a 2018 podcast interview with PragerU, Harper suggested Canadian journalists were “co-ordinating” their work in 2015 and that “we were literally censored out of the coverage.” As Canada’s National Observer’s own Sandy Garossino wrote, “here’s a man who dominated this country for almost a decade, strode the world stage with Barack Obama, Angela Merkel and other historic figures, now reduced to fabricating bitter recriminations against the media on a second-rate YouTube channel.”

But Harper has rarely been more wrong than he was on COVID-19. In a May 2020 op-ed for the Wall Street Journal, Harper wrote that “all this intervention has been economically ruinous. No amount of money can fully compensate for social-distancing actions whose effect is to shut down large segments of the economy.” In his late-July podcast appearance, he doesn’t seem to have modified or moderated that perspective, given that he describes the Canadian government’s COVID-19 spending as “overkill” and “bad macroeconomic policy on an enormous scale.”

Given Harper’s influence over the movement, it should come as no surprise that the same sort of miserliness has permeated the Conservative response to COVID-19 in Canada. It helps explain why they’re polling below 30 per cent nationally — levels that haven’t been seen since Harper united the Canadian Alliance with the Progressive Conservatives nearly two decades ago. And it should serve as a reminder that leaders don’t always age with the times or remain able to read the room as well as they once did.

If the polls prove out and the Liberals are given a four-year majority mandate, the Conservative Party of Canada will surely be tempted to turn to a more resolutely Harperite leader like Pierre Poilievre. But more of the same, only with props, may not be the recipe for success. As Harper wrote, “in a democratic system, the people are our customers. And, according to conser­vative market values, the customer is always right.”

It’s time for them to listen to that market and those values and start giving Canadians what they want. COVID-19 has shown people the value of government involvement and intervention, and they may well ask for more of it as we face down challenges like climate change and income inequality. For example, in an Abacus poll released this week, 89 per cent Canadians support a one per cent tax on wealth over $20 million, a level of support that the Broadbent Institute’s Katrina Miller says is higher than anything she’s ever seen for a progressive policy proposal.

Why the Conservative party can't let go of Stephen Harper, even though they should. @maxfawcett writes for @natobserver. #cdnpoli

The Conservatives can continue offering them the same mix of austerity and petro-nationalism that they’ve been serving up since 2015. But if they want to win an election in the future instead of just continuing to reminisce about the ones they won in the past, they’re going to need to put Stephen Harper and his political legacy behind them for good.

That may be true but don't

That may be true but don't TELL them! They might take the advice and start winning elections, and THEN where would we be?

The real knee slapper is that

The real knee slapper is that Harper is seen as this right wing messiah from the likes of Murphy but when looking at his record it boggles the mind that they think this way. The only tick box is that he won the PMO. I cannot think of many or any real accomplishments Harper had outside of ridding the country of the penny.