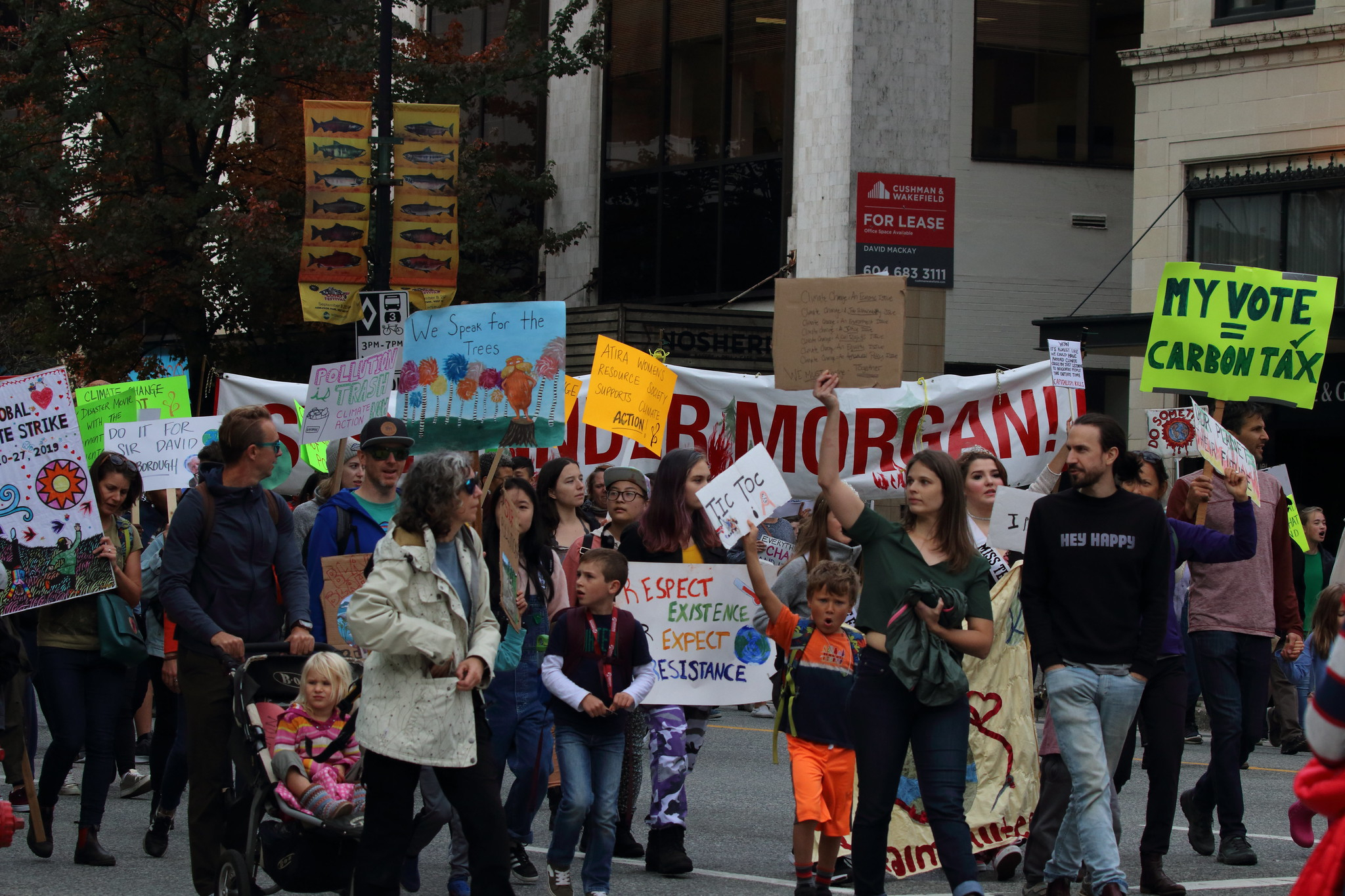 According to a recent Abacus poll, 29 per cent of Canadians say they have become more concerned about climate change just over the past few weeks, as this summer’s heat wave and fires offered a hint at the future. Photo by Derek Read / Flickr (CC BY 2.0)
Previous story

Holding an election in the middle of a pandemic is a gamble, and it’s one the Trudeau Liberals may yet end up paying for. But there’s another crisis unfolding in front of our eyes that may prove an even more important backdrop: climate change. As wildfires continue to burn out of control across British Columbia and smoke season becomes a regular part of summer in places like Calgary and Edmonton, the climate crisis may quickly eclipse COVID-19 as the dominant ballot issue for voters.

That might suit the Liberals just fine, and even help explain why they decided to roll the political dice in the first place. After all, what better way to underline the importance of the climate issue — and the disparity between the two biggest parties on it — than by holding an election at the time of year when the impacts of climate change are most obvious?

According to a recent Abacus poll, 29 per cent of Canadians say they have become more concerned about climate change just over the past few weeks, as this summer’s heat wave and forest fires offered a preview of what the future may look like. Those expressing greater concern about climate change include 37 per cent of people in B.C., 30 per cent in Alberta, and 34 per cent among those 60 and over.

To their credit, Erin O’Toole’s Conservatives have stopped pretending climate change isn’t a real issue. Their climate policy, which grudgingly accepts the necessity of a carbon tax, is an improvement over Andrew Scheer’s “plan,” which might as well have been written on a napkin from Calgary’s Petroleum Club. Clean Prosperity’s Michael Bernstein described it as a “credible path to meeting Canada’s 2030 Paris targets,” while University of Ottawa professor Nic Rivers described it as “a serious plan.”

But their party’s belated acceptance of a carbon tax is hardly the slam dunk some Conservative partisans are suggesting, especially when their plan proposes to halve it from the $40 per tonne it sits at today to just $20 per tonne. The Conservative plan’s proposed ceiling of $50 per tonne is the same as the minimum price the government’s plan calls for next year. And it’s a far cry from the levels experts believe we need to meet our emissions reductions targets. Canada’s Ecofiscal Commission, for example, suggests the tax must reach $210 per tonne by 2030.

And while Conservative policy wonks have traded their steadfast opposition to carbon taxes for grudging acceptance, their climate plan still refuses to reckon with the oversized role the oil and gas industry plays in Canada’s emissions profile. Their policy platform declares they will “make pipelines that bring Canadian oil to export markets a priority,” and it has the familiar noises about ending the tanker ban, streamlining the regulatory process for new projects, and subsidizing new oil production — including a proposed $1.5 billion for Newfoundland’s offshore industry. Aside from the mention of hydrogen and carbon capture, this language could just as easily be from 2011 as 2021.

The policy wonks within the Conservative ranks, meanwhile, may still be way ahead of the party’s actual members and elected officials. Remember that at the party’s March convention, 54 per cent of CPC members voted down a resolution stating that “we recognize that climate change is real'' and “the Conservative Party is willing to act.” Its caucus lived up (or down) to those words in June, when every last one of them in both the House of Commons and the Senate voted against the Canadian Net-Zero Emissions Accountability Act.

You can forgive Canadians for not taking O’Toole’s party seriously on this issue just yet. But the Liberals aren’t home-free either when it comes to climate change, given they’re responsible for buying and building a new oil pipeline that runs right through some of the areas of British Columbia hardest hit by wildfires right now. The contrast is an obvious one, and the NDP will surely draw attention to it, especially in the B.C. ridings where they have a decent chance of knocking off the Liberals.

Either way, an election that began with no obvious narrative could quickly morph into a renewed national conversation about climate change. As University of Calgary law professor Martin Olszynski noted on Twitter, “assuming a majority, (the) next governing party will set (Canada’s) climate policy into late 2025. That’s the game right there.”

We may not have needed this election, but we shouldn’t waste the opportunity it presents to have a serious conversation about climate change in Canada and what it demands of us.

Hard to spin the Liberals'

Hard to spin the Liberals' record on climate as anything but a disaster.
The Liberal laggards look good only when standing next to the denialist Conservatives.

Fawcett: "And while Conservative policy wonks have traded their steadfast opposition to carbon taxes for grudging acceptance, their climate plan still refuses to reckon with the oversized role the oil and gas industry plays in Canada’s emissions profile."
How does the Conservatives' rhetoric on oil & gas differ from the Liberals'?

PM Trudeau (2016): "There is growth to be had in the oilsands. They will be developing more fossil fuels while there's a market for it, while we transition off fossil fuels."
Trudeau (2017): "No madman would find 173 billion barrels of oil in the ground and just leave them there."
Sorry, that's a typo. He actually said "no country".

Seamus O'Regan, Natural Resources Minister, "acknowledged that Canada’s oil sector faced a growing problem. 'Our worst-case scenario would be if a portfolio manager sitting at the end of this table looks at his juniors and says, 'What are we doing on climate change?' And one just said, 'we’re getting out of Canadian oil and gas' . . . And you become the box-check. That’s what we’ve got to combat.'
"Canada defends role for oil sands projects in energy transition"
"Output at controversial assets to increase even as government seeks to cut emissions, minister says"
https://www.ft.com/content/705a6403-0d42-4cc4-bbac-0cf986b86ac5

"[Environment Minister Jonathan] Wilkinson reaffirmed Canada's commitment to phasing out fossil fuels and achieving net zero carbon emissions by 2050, but said achieving that target will require money generated by fossil fuels.
"'Canada needs to ensure that in the context of that transition, it's extracting full value for its resources and using that money to push forward in terms of reducing emissions.
"'What we're doing is saying it's got to be part of the transition, but part of the transition is being able to raise the revenues that enable you to actually make the investments that are required to go there.'"
"Ottawa says it needs revenue generated by the Trans Mountain pipeline to fight climate change"
https://www.cbc.ca/news/politics/wilkinson-climate-report-1.6135502

If you care about climate, marine life, and your grandchildren, vote Liberal. Not!

The Liberals' climate plan is

The Liberals' climate plan is to "green" fossil fuels, not get off them.
Trudeau & Co. are following Big Oil's playbook: delay, delay, delay.
Trudeau's plan to fail:

On climate, Trudeau is Harper

On climate, Trudeau is Harper with a smile.
Blatant denialism has largely been the purview of the "conservative" right. The new soft-sell denialism is largely on the "progressive" centre-left.

Which is worse? Climate sabotage on the right — or betrayal by the "progressives"?
The Liberals and AB and BC NDP have proved far more effective than the Conservatives in delivering on Big Oil's and Corporate Canada's agenda. Trudeau & Co. have persuaded many Canadians that we can both act on climate and double down on fossil fuels. Have our cake and eat it too. No surprise that Canada is not on track to meet its emissions targets. That's on Trudeau, not Kenney.
Trudeau and Notley moved the ball on the Trans Mountain pipeline down to the ten-yard line. Their signal achievement was to "push country-wide support for pipelines from 40% to 70%." Something Harper, Scheer, and Kenney could never dream of doing.

Acknowledge the science, but ignore its implications. Boast about climate leadership, but push fossil fuel expansion and pipelines. Sign int'l agreements, but fail to live up to them. Putting emissions targets out of reach.
Neoliberal politicians on the centre-left are propping up an industry that's costing us our future. Their oil-soaked "pragmatism" founders on delusion and denial.
Trudeau, Notley, and Horgan are betting that the world will fail to take real action on climate change. The only scenario in which oilsands expansion makes sense.
According to these "progressive" leaders, the path to renewable energy and a sustainable future runs through a massive spike in fossil-fuel combustion and emissions. Excluding the only rational responses to our global emergency — reduce emissions and stop expanding fossil fuel infrastructure. Complete disconnect from the science.
Our "climate leaders" are betting on failure.
Liberal and NDP govts that pay lip service to climate change with a conservative opposition in denial. A dream come true for the fossil fuel industry.

The new denialism. Just as delusional as the old kind but more insidious. And far more dangerous.
"The New Climate Denialism: Time for an Intervention" (The Narwhal, Sep 26, 2016)
• https://thenarwhal.ca/new-climate-denialism-time-intervention

The reason the Conservatives

The reason the Conservatives are OK with a carbon tax is that (A) it's the solution the carbon industry prefers, as it's all paid by the consumer with no skin off the bottoms of the oil execs and shareholders, and (B) It's not a climate measure.

It's just smoke & mirrors. What's behind the smoke & mirrors, is making individuals pay. As usual. Yeah yeah yeah there's a rebate. The rebates not as much as is spent on the tax. And I'm a minimal user. I can't afford to be otherwise.

The whole petro story about now makes me feel far sicker to my stomach than I can remember feeling about anything for a long time.