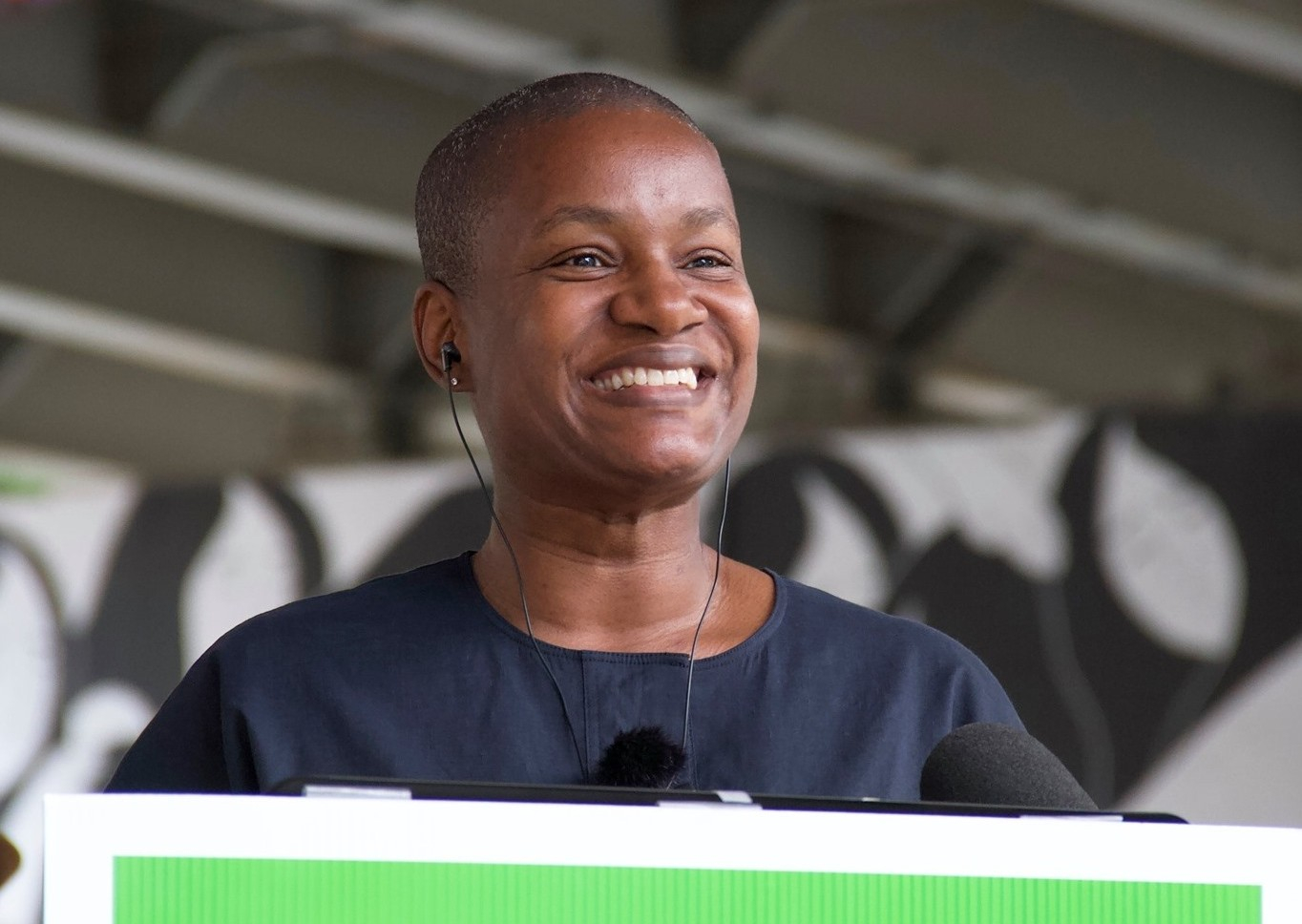 Canada’s National Observer asked federal Green Party Leader Annamie Paul about hot-button issues in the upcoming election, and what Canada needs to focus on to tackle the climate crisis.

What is the No. 1 most pressing issue facing Canadians this upcoming term?

The first is the green recovery — “the green rush,” as we're calling it — which is the global move to take ambitious, decisive climate action. By that, I mean dramatically reducing our greenhouse gas emissions with the shortest possible delay. The second is completing our social safety net to ensure that every person in Canada can live in dignity. And the third is reconciliation and forging a truly just society.

When it comes to those three things, where should we be concentrating our efforts?

For climate action, the prescriptions have been clear for a long time. In Canada, it means we need to drastically reduce our use and extraction of fossil fuels. We need to reduce our greenhouse gas emissions by 60 per cent by 2030, and invest heavily in renewable energy to move away from fossil fuels. This process will create sustainable, well-paying jobs of the future and a prosperous green economy. We need to work very closely with the United States on these goals because we have a partner there that we can work with. And we need to absolutely end all new pipeline projects, all oil and gas exploration, and all fracking.

And how about the other two issues you mentioned?

For the social safety net, we just never want to be back where we were during the pandemic with so many people left with inadequate support and protections in ways that cost people their lives. We need a national consensus that we are going to be a country that protects every person and provides a complete social safety net, so everyone can live in dignity. That has to include a guaranteed livable income, and universal programs like pharmacare, dental care, post-secondary education, and a profound reform of our long-term care system. Reconciliation begins with respect for nation-to-nation engagement, respect for Indigenous sovereignty and self-determination, and ensuring Indigenous people are the leaders and decision-makers when it comes to anything related to the future of their nations and of their lands. And, more generally, the work of identifying and dismantling structural discrimination and systemic racism, that's an ongoing project, but that's certainly part of forging a just society.

What is needed to dismantle some of those systems you just mentioned?

Discrimination is a systemic problem and fixing it requires a systemic approach, which we still do not have. It takes looking at every single policy, every single piece of legislation, every single institution, every single structure through that lens, identifying the systemic failures, and dismantling them one by one. The process should be led by those most directly impacted by those failures in the system. And so bringing more diversity into our civil service, bringing more diversity into our Parliament, ensuring that civil society has a very strong leadership role (are key) to ensuring the process is successful and doesn't lead to unintended consequences and systemic barriers.

Transitioning to a green economy is "an extraordinary opportunity," which "will ensure oil and gas workers have better-paying, safer, more sustainable jobs that aren't subjected to the boom and bust cycle," says @AnnamiePaul. #cdnpoli #elxn44

Back on the climate path, what do you think about Canada's Paris targets?

What the climate scientists have told us very clearly in the IPCC report that was just released is we need to go further faster, because we are at critical tipping points. In that report, it was very clearly set out that we have got to reduce greenhouse gas emissions by at least 50 per cent by 2030, and net-zero by 2050. And so just by that scientific target, our new Paris target is inadequate.

What is an appropriate target? And how can we reach it?

We would up Canada’s efforts and commit to reducing greenhouse gas emissions by 60 per cent below 2005 levels by 2030. And then reaching net-zero no later than 2050. To do that, we must rapidly reduce our use and our extraction of fossil fuels and phase out coal as quickly as possible. We need to have a carbon budget in this country, so we know exactly how much carbon we have left to spend, retrofit our buildings, continue with carbon pricing, and invest heavily in renewable energies. We must also create the infrastructure that will support a green economy.

What is the single most important and time-sensitive step you think Canada needs to take to address climate change and its effects on Canadians?

To agree that we need to do it. This is an election cycle, so the most important thing that people in Canada need to do right now is to vote for candidates and to vote for parties that they know will make climate action an absolute priority, and are willing to work collaboratively to have that happen as soon as possible. There is no question that there is no single level of government, party, or country that can do this alone.

Given the dire warnings in the IPCC report, does non-green hydrogen produced from gas make sense as a climate solution?

What are some of those existing, or easier to implement, technologies you think are better alternatives?

Wind, solar, retrofitting buildings, a national 100 per cent renewable electricity grid, charging stations for zero-emission vehicles, ramping up our ability to produce those vehicles as well, those are things that exist. And, on the regulatory side, carbon pricing, creating a carbon border adjustment that is hopefully shared between us and the United States and Mexico, so that we have North American carbon border adjustment.

Does green hydrogen factor into your plans at all?

All of those things are under consideration. But, as I said, we're focused on those things that hold the most promise in the most immediate term.

It's an area that has advanced tremendously. Canada is considered to be home to a number of the leading carbon capture startups and companies in the world. I put carbon capture on the track of technologies that show promise, that may have a role to play, but we should focus on the Track 1 options first. I know there are concerns that carbon capture as a technology is a distraction from other potential solutions. But I believe that there's room to make sure we are putting all of those doable solutions in place, while at the same time, ensuring Canada continues to be a leader in innovating on the other possibilities.

How does nuclear energy fit into the equation?

For the Green Party, it doesn't. We consider it an extremely expensive technology, well-known for its cost overruns, particularly when compared to other technologies that can be used for deep decarbonization. It also takes a very, very long time to bring online. Given where we are now and the amount of time we have left, we don't consider it to be a practical, implementable solution. Also, there is still no satisfactory way of dealing with nuclear waste.

How will you address anxieties about job loss and the economy in the context of a green transition?

We need to explain what an extraordinary economic opportunity this is. Other countries are not simply pursuing more aggressive, ambitious plans and targets because they want to reduce greenhouse gas emissions globally; they're doing it because it is the sector considered to be the greatest source of future economic prosperity since the Industrial Revolution. This is an opportunity to create the jobs of the future in a way that is sustainable and respects the finite resources of the planet. It's still being presented as this grinding sacrifice, as opposed to the thing that will ensure oil and gas workers have better-paying, safer, more sustainable jobs that aren't subjected to the boom and bust cycle. That is very exciting and is something we can all feel optimistic about.

What makes your party best positioned to tackle the challenge of climate change?

If I were to whittle it down to one thing, I would say it is our understanding of the urgency and of the opportunity and our absolute commitment to working with every single person, every single party, every institution, every single member of civil society that is committed to that action. If we continue to return people to Ottawa and parties to Ottawa who are primarily focused on partisan concerns, primarily focused on perpetuating their power, as opposed to coming together when it really matters, then I am not hopeful we're going to get the climate action that we need.

This is the first in a weekly series of Q&As with each of the major federal parties in the lead-up to the Sept. 20 election.

If the Greens want voters to

If the Greens want voters to back them in a "green rush" then they'll have to run credible candidates with proper support staff. Last time they ran a fake candidate in my riding (Vancouver Granville) where GP staff worked instead for Jody Wilson Raybould's campaign.

Both votes in my household went for Jody who ran as an independent, though that wasn't because of the Greens. In fact, we found the Green's tactics repugnant, which is ironic because I was actually leaning Green over the TMX project until I read about the candidate's West Side real estate background and no viable environmental experience. Then Elizabeth May admitted after the fact that the candidate was indeed fake, basically a space filler to achieve the distinctly shallow candidate-in-every-riding goal.

The Greens need to develop a realistic political strategy, mainly running fewer candidates with deep credibility in ridings where they have a chance to win. That requires them to have an adult conversation with the NDP. Instead they chose to self-immolate and assist the Conservatives by splitting the progressive vote.

As far as I am concerned, the Greens need to grow up before I'll ever look their way again.

To date, there is nothing but silence by the Green and NDP leadership.