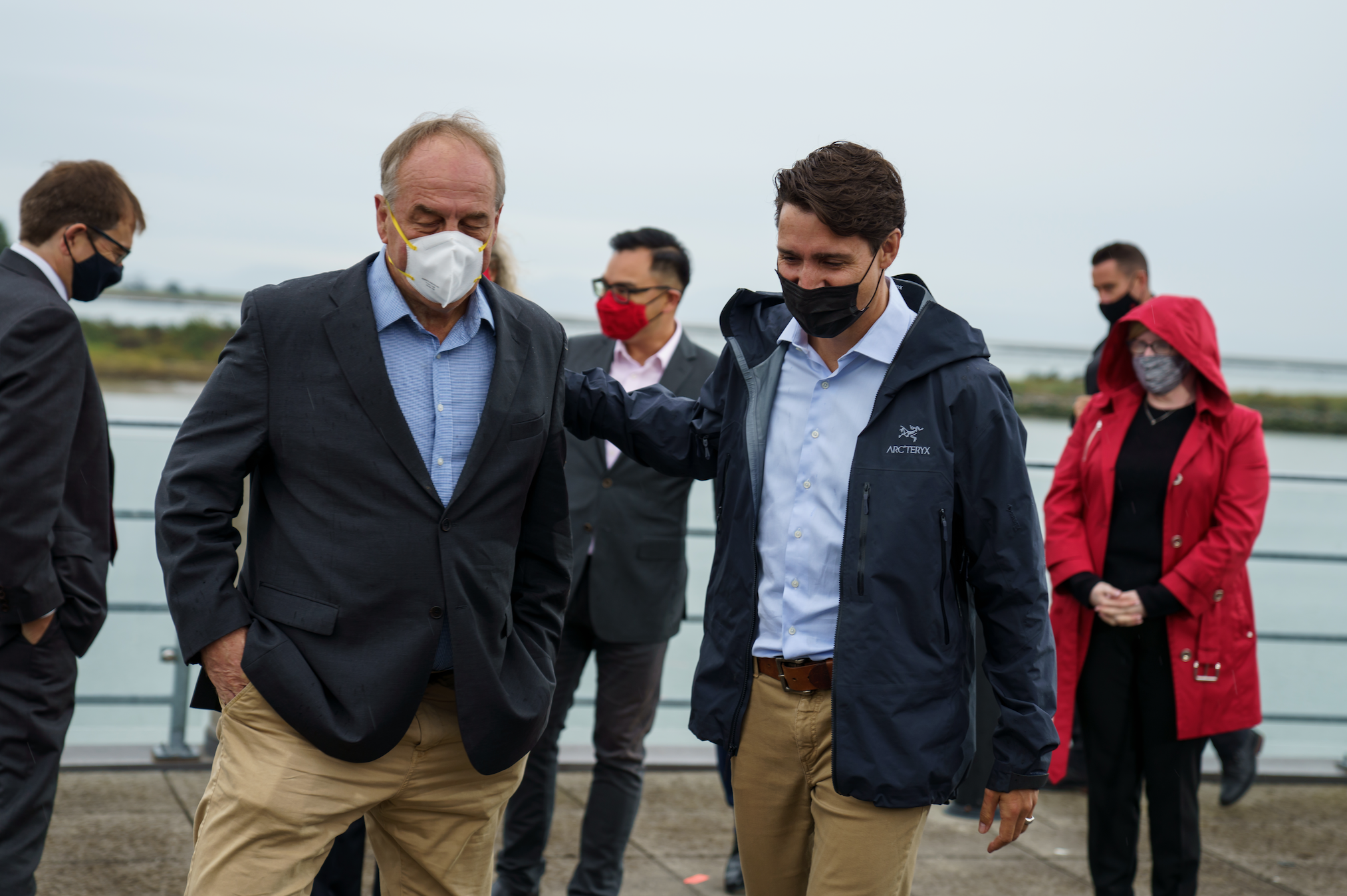 Liberal Leader Justin Trudeau was in Richmond, B.C., Tuesday to flex an endorsement from former B.C. Green Party leader Andrew Weaver in an attempt to lock down climate-conscious voters. Photo via Liberal Party of Canada
Previous story
Next story

Liberal Leader Justin Trudeau was in Richmond, B.C., Tuesday to flex an endorsement from former B.C. Green Party leader Andrew Weaver in an attempt to lock down climate-conscious voters.

Trudeau announced nothing new at a morning press conference, but flanked by Weaver and environment minister and North Vancouver candidate Jonathan Wilkinson, he made the case that British Columbians couldn’t trust Erin O’Toole’s Conservatives on climate change.

“We know the Conservatives on climate,” Trudeau said. “We lived through 10 years of cities, of provinces pushing hard to do more on climate change with a federal government that didn't just not do much, but dragged their heels and interfered with other people's ability to do more.”

“Mr. O'Toole, in this newest version of the Conservative Party, (wants) to go exactly back to Stephen Harper's targets, and Stephen Harper's approaches to the environment,” Trudeau said, highlighting O’Toole’s support for the Northern Gateway pipeline, approved by Harper before it was axed in 2016.

Northern Gateway is not referenced in the Conservative platform, but O’Toole has attempted to turn it into a wedge issue after Trudeau promised to cap emissions on the oilpatch.

The Conservatives did not return a request for comment.

With a narrow lead over O’Toole’s Conservatives nationally, Trudeau kept the bulk of his message on two points: that Conservatives would undo climate progress, and the Liberals are best positioned to deliver on climate goals. But, sensitive to progressive voters in B.C., Trudeau looked to knock the NDP down a peg, too.

“Despite what Jagmeet Singh and the NDP say, it does make a difference whether or not there's a Conservative or a Liberal government,” he said.

Trudeau said the NDP “didn’t step up on the fight against climate change,” and “the NDP didn’t bother to put forward a real plan.”

The NDP shot back within an hour of the press conference wrapping to say Trudeau promised to reduce emissions in 2015, but failed to, citing the fact Canada’s emissions have grown more than any other G7 country since the Paris Agreement was signed.

British Columbia’s 42 federal seats are becoming more of a battleground in the homestretch of the election and Liberal Leader Justin Trudeau is hoping to duke it out over climate. #elxn44 #cdnpoli

“We can’t afford his empty words anymore,” Singh said in a statement.

Weaver described the Liberal platform as a plan he’d “been dreaming of for most of my life.”

“For the first time in many, many years — in fact, in my career — have I seen a costed platform that actually is doable and will meet our targets, that’s based in scientific evidence as opposed to ideology,” he said.

Clean Energy Canada executive director Merran Smith said she agrees with Weaver that the Liberal plan is ambitious and solid.

“B.C. is a battleground for this election and British Columbians are known to care about climate, which is why I think we see climate leaders like Andrew Weaver speaking up clearly that the Liberal climate plan is the only solid plan to address climate change,” she said.

Climate advocacy group 350 Canada campaign director Amara Possian agrees Trudeau’s press conference to show off Weaver’s endorsement is a sign the Liberals are ratcheting up their fight for B.C.’s climate-conscious voters, but she doesn’t believe the party is committed.

“It's a clear sign the Liberals are worried that they're losing climate votes in B.C., and frankly, they should be,” she said. “After the summer we just had, it's unthinkable that B.C. voters would back a party that bought TMX, is giving billions to Big Oil, and has climate targets well below what we need to get to 1.5 C.”

British Columbia’s 42 federal seats are becoming more of a battleground in the homestretch of the election, as the Bloc Québécois chews into Liberal support in Quebec following last week’s debate. Ontario and Atlantic Canada appear to be locks for the Liberals, whereas Conservatives are polling far ahead in Alberta and the Prairies.

If you want your vote to help the climate, here are the questions you need to ask

Trudeau: “We know the

Trudeau: “We know the Conservatives on climate.”

We know Trudeau's Liberals on climate, too. Both parties plan to fail.
The Liberals have proved far more effective than the Conservatives in delivering on Big Oil's and Corporate Canada's agenda. Trudeau & Co. have persuaded many Canadians that we can both act on climate and double down on fossil fuels. Trudeau and Notley moved the ball on the Trans Mountain pipeline down to the ten-yard line. Their signal achievement was to "push country-wide support for pipelines from 40% to 70%." Something Harper, Scheer, O'Toole, and Kenney could never dream of.

Would Andrew Weaver, Mark Jaccard, and Martin Olszynski, and other Liberal climate plan supporters please explain how oilsands expansion is compatible with Canada's climate targets? Show us the math.
Mark Jaccard 2018: " National studies by independent researchers (including my university-based group) consistently show that Mr. Trudeau's 2015 Paris promise of a 30% reduction by 2030 is UNACHIEVABLE with oil sands expansion."
"Trudeau’s Orwellian logic: We reduce emissions by increasing them" (Globe and Mail, 20-Feb-18)
https://www.theglobeandmail.com/opinion/trudeaus-orwellian-logic-reduce-...

Canada's O&G industry grossly under-reports its emissions — an issue the Liberals have done nothing to address. Ottawa's emissions stats are fiction.
The Liberals plan to "green" fossil fuels, not get off them. Trudeau & Co. are following Big Oil's playbook: delay, delay, delay.
The oil & gas industry, and their financial and political backers, are banking on global climate action failure. The only scenario in which oilsands expansion makes sense.

Just remember Trudeau in 2015; "We are committed to ensuring that the 2015 election will be the last federal election using first past the post". How did that one end up? I for one don't trust the Liberals at all in what they say they will do about climate change if elected.

Who really cares about this