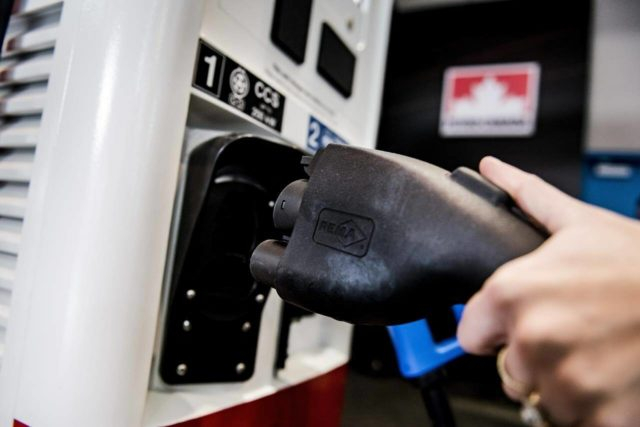 Petro-Canada’s electric vehicle charging station is photographed while on display at the Canadian International Auto Show in Toronto on February 14, 2019. File photo by Christopher Katsarov / The Canadian Press
Previous story

The federal government is promising to spend close to $880 million over the next four years to build about 65,000 new charging stations for electric or fuel cell-powered passenger vehicles.

But an industry group representing some of Canada’s biggest automakers says Canada needs to be building millions of stations.

Brian Kingston, president of the Canadian Vehicle Manufacturers Association, said a national electric-charging network needs years of careful planning to ensure the charging stations are available when and where people need them.

“We haven’t done the planning and we haven’t put the investment into a charging network,” he said.

Canada is mandating EV sales — 50 per cent of new cars sold in 2030 and 100 per cent in 2035 — but nobody is taking the lead to make sure people know what that means for how much electricity, or how many charging stations, will be needed, he added.

The association represents three of Canada’s biggest automakers — Ford, GM and the new multinational Stellantis, formed earlier this year in a merger that now represents brands such as Dodge, Jeep and Chrysler.

Kingston said automakers are committed to the transition to electric — the three companies the association represents are investing US$100 billion in electrification over the next few years, with plans to bring 120 new EV models to the market.

But he said new models and more supply would solve only one piece of the electric transition because if the charging networks don’t keep pace, people aren’t going to make the switch.

Or, even worse, they’re going to switch back, he said.

A study published in Nature Energy journal last spring said as many as one in five zero-emission vehicle owners went back to gas power because of inconvenient charging access.

Canada is mandating EV sales — 50 per cent of new cars sold in 2030 and 100 per cent in 2035 — but nobody is taking the lead to make sure people know what that means for how much electricity, or how many charging stations, will be needed. #EVs

“So I just use that as a caution to government that, you know, we better start planning this like tomorrow,” he said.

He argues Canada hasn’t done the planning and instead has a fractured response with very low ambitions compared to the rest of the world.

Canada currently has about 15,000 public or semi-private chargers available, and at least another 2,000 are in various stages of construction with public funding. Natural Resources Canada has another $180 million in the existing budget to build 17,000 or so more in the next three years.

Kingston said to keep pace with Europe’s goal of having one public charger for every 10 EVs, Canada will need almost four million chargers by 2050. To get to California’s goal of one for every seven vehicles, that’s closer to six million needed in Canada.

An analysis done for Natural Resources Canada recently suggested Canada will need, on average, one charger for every 20 EVs by 2025 and, after more EVs roll on to streets, the ratio would fall to about one in every 49 vehicles by 2050.

“It’s obvious that we don’t have an ambitious enough plan to build charging infrastructure,” Kingston said, adding overbuilding is needed at first to encourage EV adoption.

The Natural Resources analysis also notes that longer term, it’s more likely that public chargers will need to be high-speed, capable of recharging a car in less than an hour.

The International Energy Agency said this year Canada has about 0.06 publicly available chargers for every EV on the road, ranking about 20th in the world, neck and neck with the United States as a whole.

In November, an Ernst and Young analysis of the EV readiness of the world’s 10 biggest auto markets said Canada was in the bottom three, largely because of low demand and a lacklustre charging system. China is on top, followed by Sweden and Germany.

Wilf Steimle, president of the Electric Vehicle Society, said charging is one of the biggest concerns raised by people thinking about making the switch.

“What owners care about is, by the time I’ve gone to the bathroom, and grab another cup of coffee, is my car ready to go, because I don’t want to stand there waiting for it for half an hour or so,” he said.

If Jason Kenney wants a $32B subsidy for Big Oil, he should pay for it

I've only really used charging stations once in the three years I've owned a Leaf. Basically, it only comes up when you're doing a road trip, the rest of the time we charge at home.
But when you do that road trip, charging stations are essential. And what we found is that while there were stations everywhere we needed there to be one, so we could get where we wanted to go, there weren't enough at those places. Plugging in your car while you go grab a coffee is no big deal; we found we were basically just doing it when we wouldn't have minded a pit stop anyway. But WAITING FOR OTHER PEOPLE to finish charging their cars so you can plug yours in, is a major pain. And that happened too much of the time.

Because any given electric car owner probably doesn't need charging stations that often, we may not need all that many. But we need more than we've got, and that's going to multiply as more people have electric vehicles.