Federal housing minister looks to crack down on investment homes 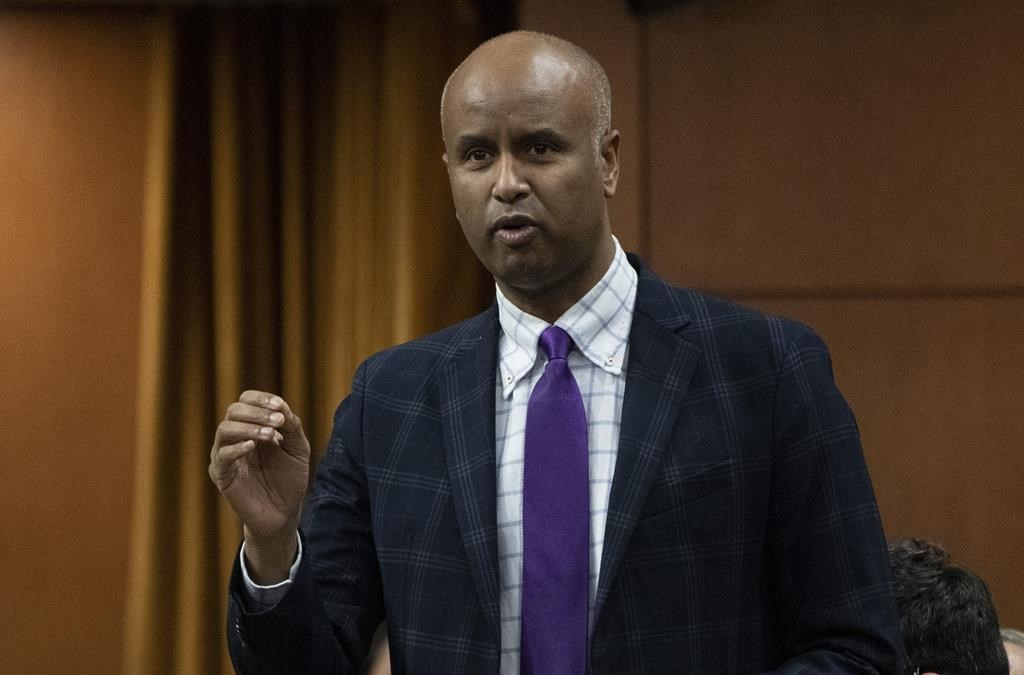 Housing Minister Ahmed Hussen said he’ll be looking for feedback on the government’s plans when he speaks with provinces, cities and housing providers at a summit early next year. Photo by Adrian Wyld / The Canadian Press
Previous story

The broad strokes of the agenda were outlined in the mandate letter the prime minister gave to Housing Minister Ahmed Hussen.

Among the marching orders to Hussen was to dissuade Canadians from snapping up income properties by reviewing rules around down payments and policies to curb "excessive profits."

Hussen says tamping down on the rush for investment properties and flipping, as well as discouraging foreign investors from holding on to vacant homes, is also part of a push to rein in rising home prices.

He says the government would draw a line between mom-and-pop-style landlords and large real estate trusts that own hundreds of units as a passive investment vehicle and may not care whether they are occupied.

“The point is to reduce the speculative demand in the market and help cool these astronomical increases in prices,” Hussen said in an interview Tuesday.

The Canadian Real Estate Association projected in a report this month that the national average home price will have risen by 21.2 per cent year-over-year to $687,500 by the end of 2021.

The government’s economic update last week included a one-per-cent tax on foreign-owned vacant homes, which the Finance Department estimates will bring in $200 million in the 2022-2023 fiscal year.

Hussen says other measures the Liberals have in mind are beyond the reach of the federal government and will require negotiations with provinces and territories.

Ahmed Hussen says tamping down on the rush for investment properties and flipping, as well as discouraging foreign investors from holding on to vacant homes, is also part of a push to rein in rising home prices. #Housing #Cdnpoli

Among these are a promised ban on blind bidding — when sellers opt not to reveal the details of competing bids — or the right to a home inspection prior to purchase.

Hussen is familiar with such negotiations, having been part of the federal push to sign child-care deals with provinces before getting a new ministerial mandate after the Sept. 20 election.

But he is equally no stranger to going around provinces directly to municipalities with funding, and may do so with a proposed $4-billion fund to accelerate the development of affordable housing projects.

The money could help offset the cost of land to build new projects, help local governments hire more planners to speed up approvals, or let cities rewrite zoning rules to push builders to add affordable units to a proposed development.

If cities don’t want to go along with the government’s plan and give in to Not In My Backyard sentiment, Hussen said, they won’t have a chance to apply for the cash.

“There has to be a national conversation, I believe, to overcome, sometimes what I think is unreasonable opposition to affordable housing in neighbourhoods,” Hussen said.

“These are well-thought-out, well-regulated, well-supported plans and sometimes, I find, that there is NIMBYism that goes on. It's just discouraging.”

Hussen said he’ll be looking for feedback on the government’s plans when he speaks with provinces, cities and housing providers at a summit early next year.

How about making it legal to

How about making it legal to squat in any unoccupied housing? Only non-entry damage would be discouraged. There are lots of ways to tackle homelessness without making builders do a special section, often doomed to fail for long-term affordability. Let tent cities be safe and secure, growing into shanties. Legalize all those illegal suites and start protecting their residents. Let people sleep in vehicles. Build public washrooms, with lockers and laundry facilities. Mainly, TAX THE RICH.

How about dedicating funds to directly address homelessness/under-housing. Even to the level that used to be in federal budgets. That would at least be a start.

How about finally moving their butts on a Universal Guaranteed Basic Income, which would go miles to addressing poverty. And let people find the solutions THEY prefer.

I live in Northeastern Ontario. It's going to be -22C tonight. People need safe, affordable basic housing options. Tiny houses, etc. Convert some of the hotels and motels along the way that have gone bankrupt and are sitting vacant.

Tent cities and shanties, a sleeping in one's vehicle (if you happen to have one), and trying to find a place to pee.......these are not safe. Options only if by choice, and not the kind of forced choices available now.

Hello? Sleeping in vehicles *is* homelessness. Good grief.
There's no way, conceivable to me, to "discourage non-entry damage." Perhaps also illegal hookups to hydro and gas? Color entire city blocks the color of fire.
Toronto already has reqirements for "affordable" housing, to be "affordable" for I believe it's 95 years. However, as always, the devil's in the details, and "affordable" has been defined for the middle class, and means incomes that would see those who are now homeless still unable to afford shelter.
Tent cities are not safe and secure, and cannot be.
Basement suites and other second suites are already allowed in Toronto. There have been (don't know if they still exist) grants to assist with conversion to code, as long as the tenants will be elderly, disabled or otherwise low income.
Hussen needs to get a grip on the facts, perhaps.
There used to be public washrooms, there are lots of laundromats, and lockers were removed from all kinds of places: subways, train and bus stations, shopping centres, because of bomb threats, use to stash contraband, etc.
So all those suggestions either reinforce homelessness, or are dangerous and impractical, or both.
Builders are highly subsidized. They get all sorts of freebies and "incentives," and the problem with the cost of new buildings is their excessive profits. And they are mainly foreign corporations doing the building, to boot.
The last suggestion is very worthy, and Just Won't Happen, in my humble opinion, because our leaders are all beholden to the rich for filling their election coffers, and/or wealthy themselves.

You know, in much-maligned

You know, in much-maligned Venezuela, where the government is broke and the country is sanctioned like crazy, the government over the past 10 years or so has built 3 million homes. So . . . we're much richer, why can't we do that?

The federal housing minister doesn't get it. "He says the government would draw a line between mom-and-pop-style landlords and large real estate trusts that own hundreds of units as a passive investment vehicle and may not care whether they are occupied."

Ahmed Hussen doesn't get it because he doesn't want to get it. So long as there is no vacancy control in any given province, there's no appreciable difference between mom-and-pop landlords and REITs. Sure, REITs are somewhat worse in that they can sweep into a place and have a lot of influence in shaping the local housing market, but it's not as though the housing market is not in the first place shaped by lack of vacancy control.

I'd suggest that perhaps

I'd suggest that perhaps Manitoba and PEI are not seen as "desirable" locations, and not because of rent controls, which is what limits landlords' ability to aggressively increase rents in between tenants.

Ahmed Hussen doesn't get it in a number of ways, including the exemption of "mom-and-pop" landlords.

I've been told our mayor owns and rents out several houses and condos. He's a millionnaire many times over, perhaps even a billionnaire. I don't keep track. He's part of the problem, not part of the solution.

As long as there's no price controls, or profit caps, the prices will keep going up. I've no problem with those who buy a run-down place that no longer meets code, fixes it up, and charges more rent, as long as the profits involved in doing so aren't excessive. Because it's the tenants who can no longer afford who become homeless in the first place, and the tenants who can pay what's demanded who assist in driving up the rents. Not that it's the tenants' fault: it's the laws and by-laws that let landlords get away with it. They should, perhaps, be included in the prescription their class has for poor people: go get a job.
We train and encourage vulturism in the residential market, whether in purchase prices or rent costs.
The solutions it appears Hussen is entertaining don't seem to me to have much potential for changing that.

As for zoning for density,

As for zoning for density, without taking measures to ensure the affordability of the housing to be built in the new dense zones, that's just a stupid reiteration of 19th-century supply and demand economic theory.

Please don't grow tired of me yet! The third way to put this is that land values only increase with densification that does not come with provisions for affordable housing into perpetuity, and in this instance those land values are passed on to renters.

Not only that, but the

Not only that, but the concept sketches of "increased density" have no relation to what is actually done to cities. Density like that which exists in the city core in Toronto is not only unhealthy, it's inhuman. The people who like living there are those who can escape several times a year to places that are not at all like where they live.
Density in my own neighbourhood has increased greatly while I've lived here. It's made the 'hood much less liveable, not moreso. I spend portions of each day dealing with the illicit doggy-do on and around my property. Walking home is disgusting, right up to the gate: I used to like fresh snow. By noon now, there's only yellow snow.
Many of the owners live in apartments: that's basically what increased density means.
At the same time as the idea of growing food in one's yard is theoretically promoted, still the push is on to convert the land that could grown (and has grown) food, to alley housing. Preferably multi-residence housing. Meanwhile, we can't deal with the sewage we've got, the water smells so badly of bleach that bathing in it makes skin smell disgusting, and water itself is so expensive that people on "modest" incomes can't afford to water gardens in dry summers.
What I'd like to know is what, exactly, cities and provinces did with the loot when they sold off public housing; public housing comes with no profit motive. Although here we've had a lot of mismanagement and the management diverting rents to their own pockets instead of spending what was reqired for reasonable maintenance.
There are problems, though, between levels of government when more than one is involved, because they cannibalize the tenants and taxpayers charging each other excessively.
Scams wherever you look, at every level.