By Marc Fawcett-Atkinson | News, Food Insider | November 30th 2021
#1 of 8 articles from the Special Report: Farming for the future 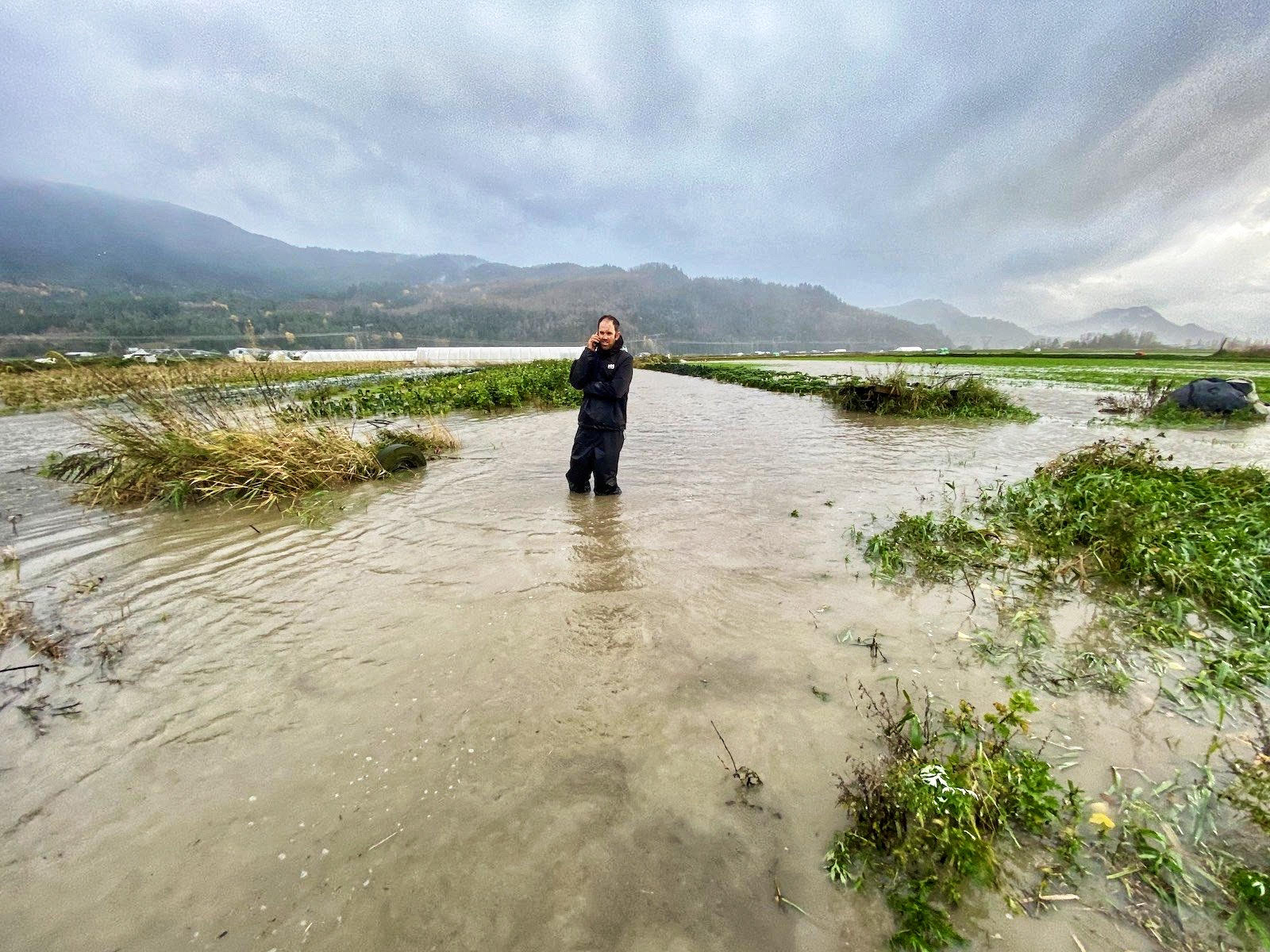 Travis Forstbauer stands in a water-submerged field in Chilliwack after an unprecedented November storm. Photo provided by Niklaus Forstbauer
Next story

When an unprecedented atmospheric river sent floodwaters rushing across Travis Forstbauer's fields earlier this month, the Chilliwack, B.C., farmer was worried he'd lose the precious fertile soil his livelihood depends on. He was pleasantly surprised when the water receded to see that his land had suffered minimal damage.

They were saved by his cover crops — crops like alfalfa or rye grown in fields over winter — that kept the soil rooted in place.

"(About) 95 per cent of our fields are covered with some type of vegetation. Most of it is cover crop," he said. "A cover crop is important — it is really noticeable in a flood."

Unlike many conventional farmers who leave their fields bare when they aren't in use, organic and agroecological farmers like Forstbauer typically plant a cover crop to restore their soil with nutrients and organic matter.

Turns out, cover crops and other key practices in organic, regenerative, and agroecological farming also help farms weather the climate crisis. In addition to keeping soils stable during floods, they protect the ground from extreme heat, which can kill important microbial ecosystems, and help retain moisture during dry spells.

"These agroecological systems are very effective at adapting to climate change,” said University of Winnipeg geography professor Ian Mauro. "I know many producers who are using these kinds of systems, and they have been disrupted by recent climate events, but have been able to buffer them in a fairly consistent and meaningful way,” he added.

Agroecology is an approach to farming that integrates farms into natural ecosystems to prioritize soil health and biodiversity. It also tackles social and economic inequality by prioritizing farmers' autonomy from large seed and fertilizer companies, farmworkers' rights, and communities' food sovereignty.

The approach is integrated into the European Union and other countries' agricultural policies and could be included in future global climate deals. Earlier this year, the federal government created a program that partners farmers and scientists to develop more sustainable farming practices. It has also said it will spend $270 million by 2023 to help farmers transition to more sustainable and resilient practices, like cover cropping.

Yet, Canada has overall been reluctant to include agroecology in national and international agricultural and climate policies. For instance, at the recent COP26 international climate conference, Canada committed to a pact in support of tech-heavy, "climate-smart" solutions favoured by the U.S. and large agribusinesses while blocking efforts by developing countries to include agroecology in the official UN treaty.

Critics say the governments and businesses who shun agroecology in favour of industrial farming practices that boost yields — and agribusinesses' profits — at the environment's expense should take note of the resilience shown by farmers who have adopted the approach.

Cover crops and other key practices in organic, regenerative, and agroecological farming also help farms weather the climate crisis. In addition to keeping soils stable during floods, they protect the ground from extreme heat and capture moisture.

"Climate change adaptation and mitigation became one thing in a holistic integrated system (that is) in balance with the natural world... Not only is it theoretically possible, but a lot of farmers are doing it and it's working," said Mauro. "We desperately need that kind of innovation and scaling up to buffer the changes we're seeing."

Karen Klassen is one of those farmers. In recent years, she has been replacing conventional practices that rely on pesticides and fertilizers with more sustainable approaches like cover cropping on her family's Manitoba grain and pulse farm. When months of extreme drought — and a single, intense June monsoon — hit her farm this summer, the fields grown using agroecological techniques fared better.

"We had no rain the entire growing season, basically. We hardly had any snow to begin with, and we had one big deluge in June, (but) the crops had just been planted and it didn't really help them," she said. "But the fields we hadn't tilled that had stuff growing like peas and wheat and the early-seeded stuff, they did well."

Driving by other nearby farms, she noticed significant differences in crop health between fields. While these could be due to quirks in the landscape that gave fields more water, she said she'd like to see firm data on the link between that resilience and farmers' adoption of more sustainable techniques.

Moreover, the fields she grew using more regenerative techniques had the added advantage of not needing expensive artificial fertilizers and could be sold on the more valuable organic market.

Klassen said "unprecedented" high global prices for commodities like wheat mean the farm has done all right financially despite the drought. Still, because it is impossible to predict when prices will fall again, increasing her farm's resilience to climate chaos is essential.

"Food security, where our food will come from in a changing climate, is something we cannot take for granted. It's something we deeply need to plan for and invest in," warned Mauro. "When we think about climate resilience moving forward, it requires (planning for and investing in everything) from soil health and ecosystem well-being and sustainable production methods through to the cultural practice of consuming and eating and transporting food."

Back in B.C., Forstbauser said fostering the relationships between people, food, and soil will be essential for the years to come. That will take a shift in perspective from farmers, consumers, and policymakers from a rigid, industrialized approach to one focused on adapting to different landscapes and communities' specific needs.

"We're in a generation where we can get almost anything we want — click a mouse and it'll be here. Farming is not the same way ...It's about maintaining soil health, maintaining biodiversity," he said. "There's a spiritual aspect, whether you're farming conventionally or organic. It's whether we choose to recognize it."

""But the fields we hadn't

""But the fields we hadn't tilled that had stuff growing like peas and wheat and the early-seeded stuff, they did well."
The principles of crop rotation have been well established since the 17th century. Farmers in Saskatchewan were adopting 'no tillage' techniques in the late 1970's. The author seems to attribute the lack of widespread adoption of these principles to government inaction and support. Maybe he should be looking to the capitalist economy for the villains: The captive politicians who conspired to destroy the farmer's coops and the Wheat Board, together with the agro chemical and food complex that paid for this increase in their leverage over the agriculture and food industries. To all our detriments, farmers and consumers alike.

Flooding is a double edged

Flooding is a double edged sword. it both scours soil from un-protected fields and it deposits ( in ideal circumstances,) new layers of soil. Unfortunately, in our modern world it also deposits unwelcome trash, toxins and wastes from both human and animal waste treatment facilities overwhelmed by the inundation. Farms surrounded by human and industrial activity are terribly vulnerable to this contamination and it may destroy arable land for years. We are no longer living in harmony with the earth and flooding only spreads the misery around wholesale.

These techniques, mostly related to no till and cover cropping, have been proven over time to reduce soil erosion by floods and wind, improve soil structure that in turn promoted the double-whammy of better drainage under wet conditions and moisture retention during dry growing seasons, and results that include deeper plant root systems and better yields.

Farmers also lessen their dependency on fertilizers and have lower machinery maintenance and fuel costs.

In the Fraser Valley there is a great need to protect the Sumas Prairie and nearby farmland which contain some of the richest and most productive food-producing soils in the nation. The rebuilding of the dykes and the construction of new dykes must be planned carefully to address rising seas as well as rain and snow melt-related floods. A 50-year outlook taking into account contingencies or expansion needs to be costed out. It will be expensive, but addressing only immediate concerns with a build-out will only result in future failures and even higher costs.

It's also obvious that the Trans Canada highway and the railways need to be raised and better flood-proofed. With improved design these pieces of infrastructure, if raised and armoured, can double as dykes.

Nothing wrong with farming in

Nothing wrong with farming in floodplains. The ancient Egyptians did that in the Nile delta for millennia. Just don't build permanent infrastructure in floodplains.

I am not a farmer by any

I am not a farmer by any means but what does "laying fallow" mean? It seems to me that going back to the middle ages portions of farmland were left un-tilled for a season to reconstitute the conditions of the soil. Could it be that agricultural chemical industries have created a situation where this practice has been lost?

This is an important article.

This is an important article. I wish more news media would focus on restorative practices, local forms of resilience, and what we the people can do to support the real farmers..........and give agro-business money grubbers in suits a pass. Too Big to Fail is not only a stupid phrase....its a lie.

Too Big to Care, is the actual truth.....in the real world of earth and air and water, too big to care is a recipe for disaster, and in the final days, widespread hunger.

Indeed. Many of the same

Indeed. Many of the same restorative practices can also be applied to forestry. The difference is that a reduction and change in methodology in logging will occur, dominated mainly by less intensive selective thinning. There would then be a demand for value added wood products that will help make up for an overall loss of jobs based on the false economies of the unsustainable boom & bust of massive clearcuts and raw log exports.