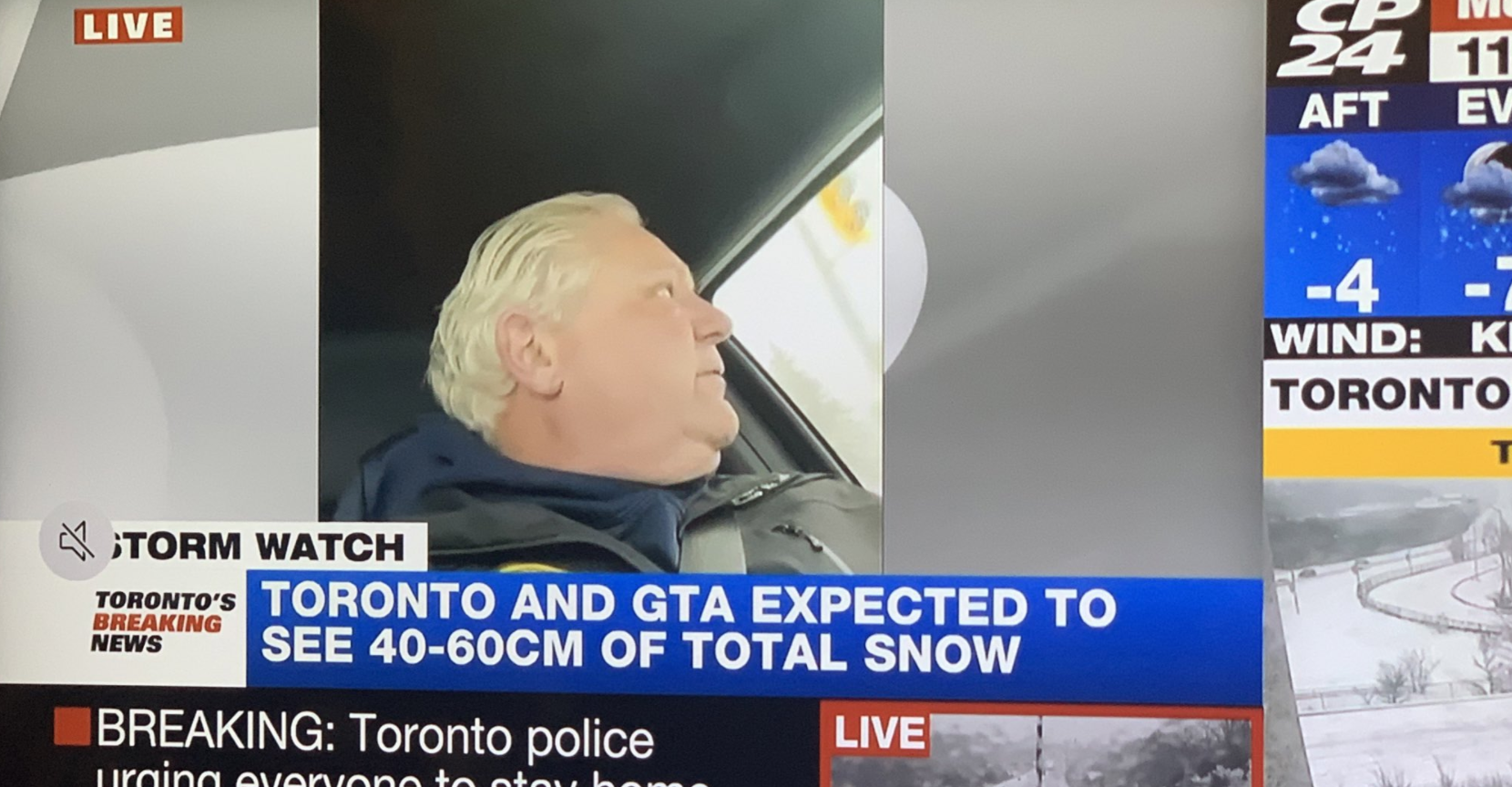 Over the course of Sunday evening and Monday, a low-pressure system hammered southern and eastern Ontario with snow. Peak snowfall accumulations topped 36 cm across the Greater Toronto Area and municipalities across the affected areas encouraged Ontarians to stay off the roads, and use extra vigilance if they had to drive. That didn’t stop Ontario premier Doug Ford from chatting to reporters on a video call from his cellphone while driving himself around Toronto.

The premier conducted the interview while driving, during a live program on Toronto network CP24. Ford’s cell phone appeared to be set up on the console to the right of the driver’s seat. During the interview, which was cut midway by CP24 as the premier was driving, Ford took his eyes off the road multiple times to glance down at the phone.

Reporters and Ontarians were quick to note on social media that Ford’s behaviour constituted a violation of Ontario’s distracted driving laws, and in particular contravened the section that states it is illegal to “view display screens unrelated to driving, such as watching a video.”

The interview was one of a slew of publicity events undertaken by the premier and his team during Monday’s storm. Video footage of the premier attempting to shovel snow away from cars stuck in snow drifts went semi-viral on social media, causing users to express confusion at Ford’s small shovel and scooping technique. The Peel Paramedic Union took to Twitter to remind Ford that calls from regional authorities to stay off the roads included him, adding, “We get it, you have a truck, a shovel, and you are relatable.”

And also calling out @TorontoPolice @TPSOperations for not fining @fordnation for distracted driving in A WEATHER ADVISORY.#onpoli #COVID19 #VoteFordOut2022 pic.twitter.com/1k5DBSbKko

Ford’s snow rescue mission took place at a time when his government’s pandemic responses have frustrated Ontarians across many sectors. CTV Toronto reported on the same day that Ford’s approval rating among Ontarians had dropped to its lowest level yet.

And as some news outlets and reporters shared the content uncritically along with images from Ford’s team, some were accused of running PR for the premier. The backlash against Ford’s snow mission caused others to question the Ontario PC government’s refusal to offer additional support to working Ontarians during the latest Omicron wave battering the province.

To Twitter user Aaron Hoyland, the events demonstrated that “Conservative politicians think that public services can be replaced with individual generosity and philanthropy.”

Premier Doug Ford is driving his vehicle while doing a FaceTime with CP24.

You’d think the Premier would know some of the distracting driving laws… pic.twitter.com/htT3FXYCuE

Photo-ops and shovel work do

Photo-ops and shovel work do not take the place of policy work and brain power - Since the Ontario government lacks both policy and brains - we are stuck with the photos.